What happened to all the Protestants who gave Dún Laoghaire its character? 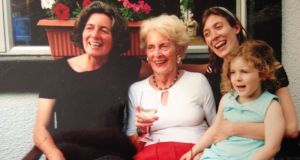 The end of April, the beginning of May is a time when I am filled with a sense of dread and paradoxically a sense of hope. It is the time when my mother, just short of her 88th birthday, became terminally ill. It is also the time when my grandson was born, when I rushed from my mother’s side to be with my daughter as her son breathed his first breath. May 2nd marked seven years since my mother died; it was also the date when my new novel, The Therapy House, was launched. This is more than just a coincidence.

I have been writing thrillers set in and around Dún Laoghaire for nearly 20 years. My first book, Mary, Mary, published in 1998, was a hit, critically and commercially. It changed my life. I became a full-time writer. Ten years later, just after my sixth novel, I Saw You, was published, my life changed again. My mother became ill. She needed me in a way she had never needed me before. Physically frail and mentally unstable, she could no longer live on her own. She had always been fiercely independent, strong and attractive, a bright light, still remembered vividly even now.

What had happened to all those members of the Church of Ireland who had given Dún Laoghaire its distinctive character? Where had they gone and why?

She grew up in Dún Laoghaire, or Kingstown as she called it, the daughter of the rector of the Mariners’ Church. When the second World War broke out she went to England to “join up”. Her first husband, a lieutenant in the Fleet Air Arm, died when his plane crashed into a lough in Scotland during a practice bombing run. She married my father, a doctor from Greystones, who was awarded the Military Cross for bravery in the battles of the Western Desert and was seriously wounded at the Anzio landings in Italy. They emigrated to New Zealand in 1947, where I was born. Ireland was a narrow-minded and hostile place for those who had seen the world at war. In a strange echo of my mother’s first loss, my father disappeared into the South Pacific when I was four. Another body never found. Another funeral never held.

And now she was old and ill, confused, frightened and angry. I found her a nursing home. That wasn’t enough. Her grief at the loss of her true self became my grief. I began to look at the world through her eyes and as she talked about her childhood in the rectory in Adelaide Street I wondered? What had happened to all those people who once worshipped in the Mariners’? All those members of the Church of Ireland who had given Dún Laoghaire its distinctive character? Where had they gone and why?

Unable to write, my time taken up with doctor’s appointments, hours spent in A& E after yet another fall, the panic-stricken phone calls summoning me to rescue her from some unnameable fear, I trawled through the church’s marriage and baptismal records. I looked for couples who had married in the Mariners’ between 1900 and 1939 and whose children had been christened there. I found 48. These I decided would be my Mariners’ families. I would seek them out and and discover why they no longer lived in Dún Laoghaire’s Victorian squares.

I found 30 of the 48. Some still lived in south county Dublin. Some had emigrated to Northern Ireland, England, Canada, Australia. All had stories of the way life had changed after independence. Clarendon Monsell, for example, from Mulgrave Terrace, a civil servant who had taken his family to London rather than work for the “rebels”. Ethel Crossley, unhappily married to a British soldier, who decided to go to England with her three young children to get the divorce denied to her in Catholic Ireland. Many felt threatened by the Ne Temere decree. Emigration to a secular country held out the prospect of a better life. And then there was Andrew Knight, an inspector on the Dalkey tram who lived in Dún Laoghaire with his wife and four children. On July 8th, 1921 he didn’t come home after work. His body was found the next day under a hedge a couple of miles away. He had been shot through the jaw, murdered by the local IRA unit, accused of informing.

It took years after my mother died to pick up the pieces of my life. Ideas began slowly to form. The 1916 centenary was on the horizon. I could imagine the shock and fear, the uncertainty about the future, that must have swirled around Kingstown in the aftermath of the Rising. But I didn’t want to write an historical novel. I write thrillers. Contemporary stories set in my world. And then I remembered. Michael McLoughlin, the Garda inspector who was a central character in Mary, Mary. His father, also a guard, had been shot by the IRA in a post office raid in the 1970s. No one was every convicted of the killing; no one brought to justice. Perhaps now was the time for McLoughlin to find the man who murdered his father. And how would that tie in with the murder of Andrew Knight in Kingstown in 1921? I pondered the legacy of violence. The arguments swirled around; is there a difference between the actions of the IRA in the 1920s and the IRA in the 70s and 80s? When is the armed struggle justified? What would trigger the plot?

And then I could see it. A body lies on the floor of an elegant Victorian house in Dún Laoghaire. An elderly man, shot through the back of his neck, his face mutilated beyond recognition. A retired supreme court judge from a family whose historical legacy is impeccable. His father was a hero of 1916, one of the founders of modern Ireland. So, who has killed the judge and why? And there the story begins.

I see it now as a gift from my mother. Another gift to add to the many others.