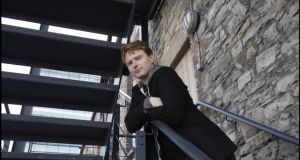 A Dublin filmmaker is aiming to bring a new dimension to Stephen Dedalus’s “ineluctable modality of the visible” with a virtual reality videogame of Ulysses.

Eoghan Kidney’s In Ulysses project wants to give modern readers another way of experiencing James Joyce’s masterpiece. Focusing on an early chapter of the book, the Proteus episode that sees the hero Stephen Dedalus walk along Sandymount Strand, the virtual reality game will give users the chance to inhabit the characters of Ulysses and explore the landscape of Dublin on June 16th 1904.

Kidney, an award winning animator and director, recently set up a FundIt campaign for the project and hopes to launch on Bloomsday 2015. “I’m very interested in adaptation and appropriation in the creative process, especially the adaptation of literary material,” he says. “I saw Ulysses as an opportunity to do something new.”

Part virtual game, part next generation ebook, part educational tool, In Ulysses will focus on the hidden meanings within the language of Joyce’s opus. “As a user walks along a virtual Sandymount Strand, the book will be read to them,” says Kidney. “They will hear Stephen’s thoughts as they are written and these thoughts will be illustrated around the user in real-time using textual annotations, images and links. A user can stop walking and explore these illustrations, gaining insight into the book.”

Asked about inspiration for the project, Kidney mentions such games as Dear Esther and Gone Home. “They bring this very literate and experiential aspect to gaming. There are also some conceptual ideas in Ready Player One which I liked. But really the major inspiration is Ulysses itself. It’s perfect for an experience like this.”

Kidney plans to make the game available as a download for iOS, Windows and Android, but he says the best way to experience it will be through virtual reality headsets. “I’ll be organising events so funders can get the full experience.”