Unfinished Business review: The financial crash and its terrible cost, 10 years on 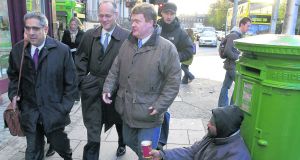 Bailout: Ajai Chopra of the IMF on his way to the Central Bank of Ireland in 2010. Photograph: Peter Morrison/AP

Book Title:
Unfinished Business – The Unexplored Causes of the Financial Crisis and the Lessons Yet to Be Learned

I do not believe in haunted houses, ghosts or ghouls from the afterworld. But if I did, and if I thought there were the slightest possibility that those who went before me would look to send me a message now, there is one room I would pause in: the meeting room of the Minister for Finance.

It is a sombre space. I do not need reminding of my solemn duties. But if ever I did, a moment in this room would be a stark reminder.

It is a deep privilege to be that Minister now, and to represent the taxpayer and the country in meetings with other government departments and international visitors.

The concept of the Irish economic sovereign is one we have become familiar with. It is nebulous, with few physical representations. But if you could feel it anywhere it would be here.

Portraits of nearly all of my predecessors line this room. All men, all deeply serious, all portrayed in tones of black and white. If these pictures could summon their presences, what tales might they tell?

My recent predecessors would speak of mistakes made at home, and then of how a global financial crisis almost overwhelmed a small open and sovereign State

They would speak of the history not just of our economy but of our country. Such spectres might tell tales of the struggle relating to the foundation of our State, of the crushing weight of low economic growth, of currency or balance-of-payments crises.

But we know what the most recent Ministers would speak of. Their experiences would be of mistakes made at home, and then of how a global financial crisis almost overwhelmed a small open and sovereign State and of searing choices to be made to restore solvency and jobs.

All of these recent Ministers were, and are, deeply thoughtful and capable politicians. They continually asked how it was that our country got to such a point of crisis and what we needed to do to begin a recovery.

Many books and academics have also grappled with these questions. The 10th anniversary of the beginning of the crisis has prompted a new set of publications. Unfinished Business, by Tamim Bayoumi, is one of them.

The author is a deputy director at the International Monetary Fund. As such he is well equipped to analyse what went wrong and the quality of both rescue and subsequent preventative measures. This book points to the explosive mix of poor banking regulation, huge credit growth, poor budgetary policies and a European monetary union whose foundations nearly crumbled.

The criticisms of banking policy are particularly strong. Bayoumi details how banks were allowed to hold low levels of capital and create their own risk models

The criticisms of banking policy are particularly strong. Bayoumi details how banks were allowed to hold low levels of capital and create their own risk models to monitor these reserves. Important sections of this book are quite technical for the everyday reader.

The section on how regulators allowed financial assets, backed by mortgage loans, to be classed in such a way as to allow their conversion into cash might require perseverance. But it is worth it, as it details the subtle but profoundly important interplay between regulation and banking behaviour. This spurred an alchemy that had deep consequences for the American housing market.

A distinctly US perspective on the creation of monetary union in Europe adds a freshness to these chapters. We are reminded that European currency crises had a long history before the arrival of the euro.

Attempts to co-ordinate major global currencies ended in 1970 with the collapse of the Bretton Woods agreement. Attempts to align European currencies culminated with the creation of the exchange-rate mechanism in 1979. Ironically, the seeds for the eventual creation of the euro were laid in the infamy of Black Wednesday, in September 1992, when the financial markets lost faith in the credibility of these initiatives.

Bayoumi, in a strong chapter entitled “Whither EMU”, analyses the then weaknesses of this currency union. Competing visions were at the centre of this project. Lack of agreement about how a currency union would promote a broader economic union, and sensitivities around the erosion of national sovereignty, led to significant weaknesses in the armoury of this union. These chinks became chasms in the teeth of the storm that was a global financial crisis.

The weaknesses of this volume are exposed in the claims of its subtitle, The Unexplored Causes of the Financial Crisis and the Lessons Yet to Be Learned.

The author offers a comprehensive assessment of the roots of the crisis but does not offer enough fresh insight to claim that unexplored causes are revealed. A cross-Atlantic perspective on the euro-zone crisis is fresh but not unprecedented.

More responsibility is allocated to European banks as instigators of unsustainable credit growth to the American housing market. This analysis argues that excessive demand for mortgage-based debt “came from the euro area as expanding northern banks created a cross-Atlantic drift into US markets”. This is an important perspective but hardly unprecedented.

Nor is the perspective that the lessons are yet to be learnt unexpected. The author acknowledges that “changes in design have made the euro area better at combating future crises”.

The creation of new funds, such as the European Stability Mechanism, significantly strengthens the foundations of this monetary union. The expansion of European Central Bank support to the euro zone, through its purchase of government debt for economies in receipt of support, was a game changer.

I am not complacent about our future challenges. But I also believe that critics underestimate the ability of the euro zone to become a hub of stability in a fast-changing world

But the author is sceptical of whether further progress can be made in strengthening the banking and budgetary architecture of our shared currency. European finance ministers will soon meet in Estonia to review our efforts and to seek further consensus on an agenda for the coming years.

I am not complacent about our future challenges. But I also believe that critics underestimate the ability of the euro zone to become a hub of stability in a fast-changing world.

This book makes a claim for originality that is unsubstantiated. That said, it is a worthwhile and occasionally bracing analysis of all that went wrong, of the terrible cost and of all that remains to be done.