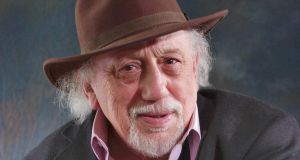 Solly was unshakeably loyal in his friendships, and ferocious in his criticism if one failed to live up to his high standards. He relished good food, vintage wine, malt whiskey, expensive cigars. Photograph: Stanley Matchett

One of the most magical rooms I have ever entered was a dusty cubbyhole at the end of a corridor off Belfast’s High Street: Atlantic Records, windowless, smelling of cigar smoke and freshly opened record sleeves, the den of Ulster’s Doctor Jazz, the legendary Solly Lipsitz. My twin brother, Peter, and I went there in the mid-1950s when we were 16 or so. Schoolmasterly, unimpressed by our musical tastes, Solly recommended Louis Armstrong and His All Stars Play WC Handy. We bought it, and I was partially hooked. The pennies didn’t fully drop until some years later when, newly married, I bought from Solly a double album, Fats on the Air, a scintillating compilation of Fats Waller’s radio broadcasts. Thus began my adoration of Waller and jazz piano, especially stride and boogie-woogie. More crucially, jazz set going my lifelong friendship with Solly Lipsitz.

A teacher disguised as a showman, Solly, with hidden method, introduced me to the jazz greats: Sidney Bechet, Bix Beiderbecke, Kid Ory, Jelly Roll Morton, King Oliver. I loved it when he removed an LP from its plastic sleeve, placed it on a state-of-the-art turntable and, under a cloud of tobacco smoke, steered the stylus to the track he already knew would win me over. Much of the music I now relish goes back to that deft little ceremony. I thank Solly for sharing with me the sublimities of Armstrong’s Hot Five and Hot Seven sessions; the unfathomable art of Billie Holiday, who drew around her the finest jazz musicians of her time. Solly ordered for me from America four LPs of Bessie Smith, the empress of the blues, as she was billed. “Not a luxury,” he assured me, “a necessity.” There were many more “necessities” – for example, 10 Library of Congress LPs of the then-forgotten Jelly Roll Morton singing and reminiscing and playing piano towards the end of his life, gloriously, for hours on end.

Solly and I drove to Dublin to hear Teddy Wilson, Billie Holiday’s favourite pianist. An artist of great refinement, he was performing in the upstairs function room of a pub. By the interval, dizzy with Guinness and exquisite pianism, I forced my way into the green room and found myself standing next to the legend. I had with me an advance copy of my first poetry collection, No Continuing City, which I shyly offered to Wilson. I opened it at the sequence Words for Jazz Perhaps and promised that I would write a poem about him one day. He held the book up to his musicians: “Look, fellas, a book of poems. Isn’t that nice!”

For the whole of the second set Billie Holiday’s favourite pianist played with my first slim volume protruding from his pocket. I was in heaven. Solly was pleased too. Words for Jazz Perhaps (a title adapted from Yeats) celebrates Fats Waller, Bud Freeman, Bessie Smith and Bix Beiderbecke, our soulmates; the sequence is dedicated to Solly Lipsitz.

For years Solly reviewed jazz for the Belfast Telegraph and the Belfast Newsletter. He advised the Belfast Festival at Queen’s on its jazz programmes, and he co-founded the jazz club on the Embankment. More than a critic and entrepreneur, Solly occasionally played guitar and ukulele with huge enthusiasm in small groups of local musicians (the Smith brothers, Malcolm Gooding, Rodney Foster). A strummer rather than a picker, he favoured the open-faced Chicago style of Eddie Condon – white jazz, “happy music”, he called it – among its stars the trumpeter Wild Bill Davidson (a barnstorming visitor to the festival one year) and the eccentric and risky clarinettist Pee Wee Russell, who intrigued us both. Solly gave me a rare biography of Pee Wee – a poetic challenge, I guess. Perhaps one day I’ll write in homage to a musician who keeps his listeners on tenterhooks right to the end of each number – a bit like Solly on guitar.

I treasure a rare CD, Solly Lipsitz All Stars: Queen’s Festival 1982 – relaxed, swinging jazz complete with a photo of our guitarist and band leader, 30 years younger, dapper and optimistic, a big gold ring on his right hand, glinting cufflinks and an uncompromising tie. The numbers include I Want to be Happy and If I Had a Talking Picture of You.

Solly was unshakably loyal in his friendships, and ferocious in his criticism if one failed to live up to his high standards. I loved his intensity, his urgent desire to share with others the things that mattered most to him: jazz, of course, but paintings as well (he was an honorary member of the Royal Ulster Academy). He relished good food, vintage wine, malt whiskey, expensive cigars. He loved really big dogs. Inspired by his partner, Anne, he bought bird seed in bulk for the wild birds that flocked to their garden and orchard. In their country retreat in Magheragall he and Anne created a kind of Eden for the creatures – foxes and badgers as well as birds.

My disputatious companion and gold-medal punster died aged 92 at the end of March this year. He was buried in the Jewish Cemetery at Carnmoney, north of Belfast, on the still snowy hillside. Pure and simple, the ceremony seemed entirely appropriate. We walked to Solly’s grave past his parents’ headstones with their Hebrew inscriptions. The rabbi swayed as he chanted the prayers, his long beard wagging in the wind. We might have been gathered in a corner of Warsaw or Lodz. At the graveside I stood next to Van Morrison, for whom Solly procured his first guitar. We were both acknowledging our friend’s profound and lasting influence. During Ulster’s most murderous times Solly made sure that we could hear the soul-music of jazz, what Philip Larkin, in his poem To Sidney Bechet, calls “The natural noise of good”. As I left the cemetery a robin started singing, and I thought of the dozens of goldfinches waiting for Solly in his garden. He was a bird of paradise in our midst.

The Simpsons: Hank Azaria quits as Apu after years of controversy
Real news has value SUBSCRIBE