UCD’s Ulysses Centre aims to be more than a museum 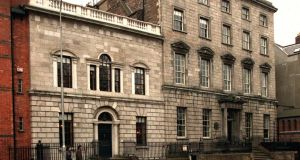 Newman House: has played host to Cardinal Newman, who founded the university; poet Gerard Manley Hopkins, who died in the building; and the most famous alumnus of all, James Joyce

People who studied in UCD when it was still on Earlsfort Terrace will remember the building in St Stephen’s Green known as “86”. Few called it by its proper title, Newman House, and far too few knew much about the ghosts of Cardinal Newman, who founded the university; poet Gerard Manley Hopkins, who died in the building; or the most famous alumnus of all, James Joyce. My memories of it have to do with rehearsals and performances in the Little Theatre, housed in a tiny room at the top of the house; of heartbreak in the restaurant in the basement; and of college society meetings in some of the grander rooms. To my shame I didn’t know enough to appreciate the building’s wonderful architecture or the depth of its literary history.

Newman House is now to be transformed into the Ulysses Centre, a venue for the celebration of Ireland’s literary tradition. The development was generated and is being steered by UCD with the participation of the National Library. A generous and substantial contribution from philanthropists Martin and Carmel Naughton, along with an injection of capital funding of €2.5 million from Fáilte Ireland means the €10 million project should see the light of day by the end of 2017. Fáilte Ireland said it chimes perfectly with its positioning of Dublin as “City of Words”.

The idea is to celebrate the Irish literary tradition in the centre of Dublin in a way that will attract visitors of all ages, from Ireland and abroad. While a centre such as this must be attractive to tourists – and it is good to see such solid support from Fáilte Ireland – it is also comforting to know the necessary academic rigour in relation to content will be overseen by the academic lead, Margaret Kelleher, chair of Anglo-Irish literature and drama at UCD. She is excited about the fact that the centre will not only celebrate some of our foremost writers (and one hopes, given her interests, that women writers will find their place in the sun here), but will also respond to contemporary Irish writing, complementing the core display with more specific rotating exhibitions. That’s the difference, she says, between a museum and a living centre.

It was here in this building in 1854 that UCD precursor the Catholic University of Ireland opened under the rectorship of John Henry Newman. Newman House has already benefited from some impressive restoration work by UCD and has been open for many years for guided tours, which include a visit to the top floor re-creation of a classroom of Joyce’s time there, and of Gerald Manley Hopkins’s study/bedroom. The Ulysses Centre, with its high- quality, sophisticated design, presenting a rich panorama of Irish literature, will bring all this and much more to the attention of a new public. The project manager, Eamonn Ceannt of UCD, hopes that, apart from bringing in Irish and foreign visitors and students, it will help create a new generation of younger readers too. He insists on the authenticity of the project, in terms of the building itself and of the material that will animate it.

This is what cultural tourism is really about: providing a resource first and foremost for our own people, but also attracting culturally curious visitors with whom we can share this extraordinary heritage. So, well done to UCD, to Fáilte Ireland and to the Naughtons for such an inspired piece of philanthropy. And good luck to them all in bringing this long planned vision to fruition.