TS Eliot's will contained a severe sentence: he did not wish to have a biography of himself published. With that in mind he had contrived the destruction of his early letters to his parents. 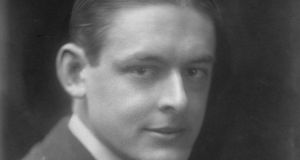 TS Eliot died on January 4th, 1965. His will contained a severe sentence: he did not wish to have a biography of himself published. With that in mind he had contrived the destruction of his early letters to his parents, although they cannot have contained anything disgraceful. Nearly all of his letters to his first wife, Vivienne, were also destroyed; some of these may have been painful. The letters he received from his first love, Emily Hale, were burned, but she retained his letters to her, and when it became clear that, even after Vivienne’s death, in 1947, he did not want to marry Emily, she donated the letters to Princeton University, with the proviso that they be sealed until 2020.

After Eliot’s death his widow, Valerie Eliot, respected his wish in the matter of a biography by discouraging would-be biographers and denying them permission to quote from copyrighted or unpublished material. She was especially strict with Peter Ackroyd, who had to write his T S Eliot: A Life (1984) without the benefit of quotations. Lyndall Gordon had to do a lot of paraphrasing for her TS Eliot: An Imperfect Life (1999).

Then there were the luridly intrusive books by James E Miller and others, which Valerie Eliot deplored but could not have prevented. In later years, when her health was failing and she knew she could not do the archival and editing work by herself, she saw to the publication of her husband’s letters in many large volumes – five by now, with more to come – and the preparation of a complete scholarly edition of his work in verse and prose, which will appear over the next several years.

She also evidently wondered whether Eliot’s prohibition of a biography might be obeyed in spirit but circumvented in the letter. Richard Ellmann told me that she invited him to visit her in London to discuss the possibility of his writing a partial biography, dealing with her husband’s American years. The discussion came to nothing, for no reason that he could report to me, except that she had pointed to a chair in her flat and called it “Tom’s favourite” and perhaps Ellmann sat in it by mistake.

But Ellmann gave Robert Crawford a different reason: that “though he had huge admiration for Eliot’s work, he was put off by an anti-Semitic streak he discerned there”. I think this story to me is more credible than the other one. Valerie Eliot died on November 13, 2012.

Crawford, who is professor of poetry at the University of St Andrews, in Scotland, says that his book “is not an official biography”, and he mentions his hope of writing another book, Eliot After The Waste Land. Presumably this means that the Eliot estate, although not designating him the authorised biographer, is content that he should write these books and avail himself of any documents he thinks he needs.

He has already established his good repute by writing The Savage and the City in the Work of TS Eliot (1987). But the existence of the first, revised and extended volume of the letters makes a problem for Crawford. He deals with every occasion as it arises, all the expected pieces in their proper places. Nothing is missing.

But if I wanted to know, say, what form Ezra Pound’s eleventh-hour efforts to improve The Waste Land took before it was published in Eliot’s magazine the Criterion I would find the evidence more fully on display in the first volume of the letters than in Crawford’s pages. Similarly for many other episodes, small and large.

Crawford does very well what he can. In the summer of 1918 the Eliots lived in Marlow, a small, elegant town on the River Thames, in Buckinghamshire. Crawford provides a warm description of the town, its environs, the river, the local shops, the other writers who had lived nearby – the Shelleys – the local Compleat Anglers Hotel, and what Jerome K Jerome said of the town in Three Men in a Boat. That is good measure. I knew that, late in 1921, Eliot went to Lausanne to submit his wretched health to Dr Roger Vittoz, a distinguished psychologist, and know now how Dr Vittoz treated him. But Crawford hasn’t cast much light on Eliot’s poems.

For instance, if I felt queasy, as I do, about the obscene King Bolo verses and thought them mere doggerel to allow Eliot to write down words he would never permit himself to speak in society, and to pass the miserable vulgarities along to Conrad Aiken, I would like to hear Crawford’s defence of the verses, if he has one. He merely quotes a few lines of them and passes along.

Again if I am puzzled, as I am, by Eliot’s poem The Hippopotamus, written in 1917, I learn from BC Southam that it is “a parody imitation of L’Hippopotame by Gautier”; that’s fine.

But what precisely had Eliot against the Roman Catholic Church, of which he was not, and never would be, a member? What, again, had he in mind in the last stanza, about the hippopotamus:

He shall be washed as white as snow,

By all the martyr’d virgins kist,

While the True Church remains below

Wrapt in the old miasmal mist.

Who is the hippopotamus, and what is the church’s miasmal mist? I recall that a great critic, RP Blackmur, took the speaker of The Hippopotamus to be “a devout and savage Christian”. Was that the Eliot of 1917, years before he knelt to receive communion in the Church of England? Eliot before Christianity has always seemed to me a free thinker, but I can’t with an easy mind contradict Blackmur.

I wish I could call on Crawford for help. But he has evidently decided that a biography is, first and unarguably foremost, a narrative of external events, things that demonstrably happened to Eliot, his wife and their associates. No wonder that Vivienne’s lover Bertrand Russell is always on the scene. Crawford reports what is no longer news: that Eliot and his wife were nearly always suffering from debilitating illnesses. It is still a problem, if not a mystery, how he got so much work done, and work of such quality. It is unfashionable to use the word genius but hard to avoid it in his case.

Denis Donoghue is the author of Words Alone: The Poet TS Eliot (2002)