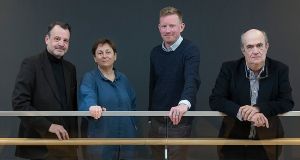 It is a bright November afternoon and Colm Tóibín, head lowered in thought, is remembering John McGahern. There is quietness in the remembering, a tuning-in perhaps. When Tóibín looks up, McGahern is, fleetingly, among us and we hear him, just, in Tóibín’s voice. There is mischief between them still, and seriousness too.

“When I was starting off, John McGahern would have been a generation before me. I saw a lot of him at the time he was writing Amongst Women and we started talking about books...’’

They spoke, for many hours, about books. Not so much about the book that one was writing, nor the book that the other – the novice – hoped to write. But about books and reading them. Uncommon books, difficult books, all books. It was a significant time.

“I found I learned a lot from him, [just…] being with him, in the way he was devoted to the life of the mind.”

In this, McGahern took the younger Tóibín into his writerly care. He did so in perhaps the only way McGahern could have done, in quiet thoughtfulness. Something important was gifted the younger Tóibín, perhaps when it was needed most.

“Being with him I learned that maybe this business is serious and requires dedication over a long time...”

The Rolex Mentor and Protégé Arts Initiative is an international programme that seeks out gifted early-stage artists and pairs them – in a number of disciplines – with recognised masters for creative collaboration and one-to-one mentorship. Importantly, the programme gives the partnering between protégé and mentor real time, funding it over two years.

The masters within the literary strand of the programme have been mentors of the calibre of Margaret Atwood, Michael Ondaatje, Toni Morrison and now, Tóibín.

Colin Barrett, award-winning Irish writer, has been paired with Tóibín. There is something a little magical in the pairing: an alchemy that might inform and further deepen the work.

Today, Barrett and Tóibín are spending the afternoon in round-table conversation with 10 writers on the University College Dublin MA and MFA creative writing programme.

With Barrett’s first novel now in process, he and Tóibín are mindful of their charge, their duty of care; not to over-talk the book, but more to circle it in the round.

Late into the afternoon, Barrett thinks about this time and what it has come to mean. “It is to see Colm and how he just lives. We don’t talk (so much) about the novel, but being around Colm, I get to see how you fold your life into art...”

The value in learning that the life you most seek to live as a writer is possible and, more than that, is truthful.

They do of course talk about the novel, but they want us to know that they are mindful not to talk the book away, that these are – by necessity – artificial structures: time and place and circumstance. But this book would seem already in safe hands.

Barrett talks with generosity about work as yet unimagined, unthought-of, unseen. Resonating, in part, with a younger Tóibín’s learning “that maybe this business is serious and requires dedication over a long time...”

A creative kinship such as this is formative in a person’s writing-life, not just because of all that is learnt, but the way in which it is learnt.

On the Abbey stage in October 2008, Seamus Heaney spoke to a hushed auditorium of his “Lithuanian godfather”, Czeslaw Milosz. Milosz, a fellow poet, took the younger Heaney into his writerly care at, it seems, a critical point in Heaney’s decision making. Heaney spoke with gratitude and a quietening love.

There are many instances of people taking on a writerly duty of care throughout our history (Joyce and Beckett in Paris, for instance), but perhaps what matters most is the unwritten place it holds in the emerging writer’s life. The Rolex mentorship programme seeks to nurture this most instinctive thing, but the difference with their programme is its sheer wingspan and depth.

It’s been a heady afternoon. There is laughing. It is Friday. There are lives to be lived and books to be written. Not least, by ourselves, the writers on the UCD writing programme.

Before we leave, Enright asks Tóibín if he has told us what McGahern said when asked once if it was not the writer’s job to write about the politics of their time.

“It is the writer’s job to look after their sentences,” Tóibín and Enright answer together, in unison, in McGahern’s absence.