The United Irishman who cheated both noose and guillotine

Fergus Whelan, author of God-Provoking Democrat: The Remarkable Life of Archibald Hamilton Rowan, on a Presbyterian radical who was a thinker as well as a man of action 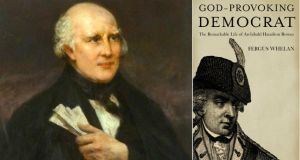 Unlike his dear friends Wolfe Tone, Edward FitzGerald, Thomas Russell and Oliver Bond, Archibald Hamilton Rowan did not perish in 1798 but continued the fight for democracy and human rights, albeit by other means, throughout his life

Little about Archibald Hamilton Rowan’s beginning in life suggested that he would become a leading political revolutionary.

Conceived in Killyleagh Castle in Co Down, he was born in 1751 and grew up in England surrounded by wealth and privilege. In early manhood Rowan lived a charmed and adventurous life, travelling in Europe and America, and lived for a time in France. Marie Antoinette was so taken by his looks that she sent him a ring. He could be reckless at times, lost a lot of money at the gaming table, became involved in duels, and ‘had scrapes with married women’.

His mother contrived to keep him away from Ireland, fearing that her son would develop passions there which might lead to his ruin. Destiny, however, has been known to find a person on the road they took to avoid it. While studying at Cambridge, Rowan duly came under the influence of the celebrated radical John Jebb, who held that no man should suffer persecution for his religious and political opinions and that the people have a right to resist tyrannical forms of government.

Rowan married Sarah Dawson in France in 1781, and thereby gained the lifelong love of a steadfast comrade. On his return to Ireland in 1784, he fought an unforgiving ruling class in the pursuit of justice for the poor. He championed the cause of Mary Neal, a child who was raped by the Earl of Carhampton, and denounced the military for the shooting dead of tradesmen in Dublin who were engaged in bull-baiting.

In 1794 Rowan landed on the French coast in the run-up to the naval slaughter that became known to history as the ‘Glorious First of June’. Such was the tense disposition of the French forces at this time that he was immediately imprisoned as a suspected English spy. From his cell window he watched many men with their hands pinioned carted to the guillotine. At the height of the Terror he was fortunate to escape the guillotine himself. Within days of his release his boots were stained with the blood of revolutionaries guillotined by their erstwhile comrades.

Rowan was a founder of the United Irish Society, and was imprisoned, this time in Newgate. When he was implicated in a plot initiated by the Committee of Public Safety in Paris to bring a French revolutionary army into Ireland, Rowan successfully escaped from the prison. Had he not escaped he would almost certainly have been hanged. He sailed to Roscoff in a small fishing craft, enduring 11 years of hardship as s political exile in France, America and Germany. Fortunately for Rowan, his wife, Sarah, successfully secured his pardon, and he returned to Ireland in 1806. Without Sarah’s tenacity, Rowan would almost certainly never have set foot in Ireland again.

His revolutionary activities, treasonable plots with spies, a prison escape, and the efforts of the authorities to entrap and hang him are such that the story of his life reads in many ways like an adventure. However, it is also much more. Although he was assuredly a man of action, these actions themselves stemmed from a particular Enlightenment form of political and philosophical ideology. Rowan’s world view was influenced by the liberal, religious and intellectual tradition of the New Light Presbyterians – Protestant Dissenters who held that every person should use their reason when forming their opinions, whether civil or religious. Rowan’s ideas were not hastily formed but were the product of a long tradition of civil and religious freedom that flourished within liberal Irish and English Protestant Dissent. Unlike his dear friends Wolfe Tone, Edward FitzGerald, Thomas Russell and Oliver Bond, he did not perish in 1798 but continued the fight for democracy and human rights, albeit by other means, throughout his life.

God-Provoking Democrat contains new information on the evolution of Presbyterian radicalism in the aftermath of the rebellion of 1798. Rowan led an active public and intellectual life almost until his death in1832. It also gives an account of the post-rebellion trauma within Presbyterianism, and Rowan’s dramatic and defiant stand in defence of New Light principles. The concluding chapters trace the evolution of liberal Presbyterian opinion as they pondered their defeat in 1798 and sought new ways of pursuing the goals of religious freedom and political democracy. In that sense I have tried to locate Rowan within this broader intellectual and political story. Indeed, Rowan was deeply enmeshed within intellectual and political life, and some of the greatest thinkers and writers of late-eighteenth-century England admired Rowan and regarded him as a friend. Joseph Priestley, William Goodwin, Mary Wollstonecraft and Thomas Paine were all proud to be associated with Archibald Hamilton Rowan.

I came to writing late in life. My first book, Dissent into Treason, was published in 2010. God-Provoking Democrat is a continuation of the same journey. A reviewer in the Irish Catholic newspaper declared that I rewrite Irish history with audacious ingenuity. That has certainly been my aim. I am attempting to inform readers of the unknown or forgotten role played by Irish Protestant Dissenters in the emergence of secular, enlightened democracy and human rights in Ireland, England and America. Examination of the remarkable life of Archibald Hamilton Rowan is the peg from which to hang a broader discussion of this interesting, and perhaps under-appreciated, strand of Irish intellectual history.