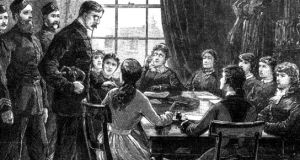 A meeting of the Ladies Land League is disrupted by the Royal Irish Constabulary.

Book Title:
The Tale of a Great Sham

The Tale of a Great Sham by Anna Parnell was written in 1907. That date might bring readers up short, and it is so amazing to note that even though it’s that long ago written, the words and their meaning have a clarity even now after all those years.

So, who was Anna Parnell? Anna Parnell was one of the Parnell family, three of whom were engaged in working for Ireland in one way or another. There was Charles Stewart Parnell, the famous MP, Fanny Parnell, Anna Parnell, and their mother Delia, who was a well-known advocate for Ireland and had an in-built animosity towards England.

Anna, Fanny and their mother set up 25 branches of the American Ladies’ Land League in 1878 and 1879. The objective was to raise money for Ireland’s tenant farmers and to alleviate the 1879 famine.

So far, so good. Anna and Fanny came back to Avondale in Co Wicklow, while the Land League was being set up by Parnell and the other MPs to try to settle the land issue in Ireland.

This book very helpfully sets out the background to all of this, leading up to the setting up of the Ladies’ Land League. In January 1881, Charles Stewart Parnell and Michael Davitt, separately and later together, invited Anna and her colleagues to set up a Ladies’ Land League. This they agreed to, though they were never given any real reason for it, and this is where the “great sham” comes in.

Anna Parnell contests that the Land League itself was bought off too cheaply by the British Government, by a series of Acts which sometimes gave relief, sometimes not, and yet there was never any overriding desire for Ireland to achieve its own freedom and to aspire to control its own destiny. This, for her, was the “great sham”.

However, the book describes in great detail how the Ladies’ Land League went about its business. We are talking about women in 1880s Ireland, who had never previously had much exposure to public life. Yet these women went around Ireland, setting up branches, encouraging the tenants to save their money to feed their children, Anna Parnell being hailed on one occasion as a Joan of Arc.

They witnessed evictions, they comforted the dispossessed, they made arrangements to build huts where the evicted tenants could live. Anna Parnell describes how back-breaking that work was, to get local builders who could be blocked by the landlord if they were engaged in building for the evicted tenants.

They undertook what was necessary in the country at that time. For instance, she describes going to remote areas, a group of women on their own, seeking out dispossessed tenants, giving them advice and practical help to set up their homes again, whilst, in her own words, the men engaged in “manifestos and exhortations” and left the back-breaking work to the women to do.

Anna Parnell writes so vividly: “Considerable physical strength and endurance were demanded by the nature of the work, and would have been under the most favourable circumstances imaginable on account of the long distances to be traversed, the inevitable exposure to weather and the very poor accommodation for travellers afforded in most parts of Ireland.”

Nevertheless, the Ladies’ Land League continued relentlessly with this work from January 1881 until they were finally dissolved in October 1882.

The ladies held their meetings, kept the books of their doings and acted in what would now be regarded as a highly professional and determined manner.

As the work went on, the animosity between the Land League and the Ladies’ Land League developed. Again, Anna writes with such clarity: “Besides our experience in housing, we were in possession of another distinct advantage in the knowledge we had that whatever we might do, we were equally certain to be blamed for it.” Such realism!

Throughout the book, Anna never addresses her brother by name or writes of him by name. Rather, she reserves her growing disenchantment and disdain for the lack of endeavour by the Land League to fight for much more than the objectives of the Land League itself. She is imbued with the idea that had they used their strength when they had it, they could have achieved much more for Ireland than a series of Land Acts, which Anna disproves of one by one.

Yes, Anna Parnell was a radical, never satisfied with what could be obtained now, but looking to what should be obtained in the future. In fact, she is remarkable in writing a forecast of what eventually became the Rising in 1916. She says: “Though it does not indicate any probability that the Irish will fight for the country when the chance comes, it does show a possibility of their doing so.”

Anna Parnell was clearly intelligent and hardworking, and saw through many of the parliamentary shams and decisions which were taken by the Land League. I could often see her point of view, and yet there were other occasions when I thought she was too harsh in not recognising the gradual, step-by-step approach of the various Land Acts which they had wrested from the British government.

It’s clear from her writing that the ambition was for Ireland to achieve its own independence, and she regrets that the Land League didn’t press for that. She says again, “The ridicule thrown on rebellion by the Fenian example was enough to put the subject out of court for a long time.” And yet, and yet, the Ladies’ Land League achieved so much in a realistic, practical sense for the tenants of Ireland. This was never recognised by the Land League itself, and in the end, both sides were glad of the imminent parting.

During my earlier life, I taught history in a secondary school in Athlone, and I was always puzzled by the lack of material about the Ladies’ Land League. You would read and hear the odd comment that they were extravagant, that they frittered away all the Land League money, that they took steps that they shouldn’t have taken, etc, etc.

To my mind, these were lame excuses because what the Ladies’ Land League was doing was what the Land League didn’t do. They were, in a practical sense, giving comfort to the dispossessed. I think her views, written in 1907, of all of that period were too radical. She was too well-educated and quickly her disillusionment grew when the ladies were not achieving what she felt the whole Land League should have set out to do.

It is clear to me on reading this book that the National Curriculum Board in Ireland should seek now to update the curriculum with regard to the whole period of the Land Wars in Ireland, which is such an important period in Irish history. In so doing, they should be quite clear in marking out the role of the Land League and the role of the Ladies’ Land League, so that young people studying history will have no doubt whatsoever of the important, decisive and far-reaching role played by Anna and Fanny Parnell and their colleagues in the Ladies’ Land League.

This is a book worth reading and demands intense reflection by all who peruse its pages.

Mary O’Rourke is an author and former government minister