The Story of a Brief Marriage review: Till death do us part 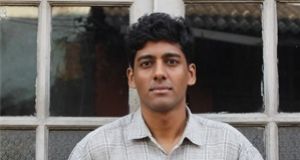 Anuk Arudpragasam: his unadorned and measured prose in The Story of a Brief Marriage serves his story well

Book Title:
The Story of a Brief Marriage

‘Didn’t dying in the end mean being separated from other humans, after all, from the sea of human gaits, gestures, noises and gazes in which for so many years one had floated?” What keeps people alive, even in times of atrocity, is a striving for connection. This is the deceptively simple premise of a deceptively simple debut novel set during the final days of the Sri Lankan civil war.

The Story of a Brief Marriage sets out to show how war fractures a nation and its people. Its startling opening scene sees its narrator, Dinesh, dispose of the dismembered limbs of a young boy injured in a bomb blast. Barely an adult himself, Dinesh works at a makeshift clinic in a refugee camp near the Sri Lankan coast. He doesn’t want to “feel the softness of freshly amputated flesh between his fingers” but carries out his grim duties regardless.

Life at the camp is reduced to essentials: eat, sleep, survive. Close to the front lines of the fighting between the Sri Lankan army and the Tamil Tiger guerillas, civilians are caught in the crossfire and die in their thousands. Food is scarce. One bowl of soggy rice is all Dinesh has managed to acquire in a few days.

With a fatalism that is easy to understand he escapes to the beach to empty the pittance in his bowels, “shifting and sliding, the whole of his thin, weak body struggling to send out one final offering into the world”.

A kind and thoughtful young man, Dinesh considers the benefits: “At the very least he would be able to sit beside her, to eat beside her, and think beside her.” Conditions at the camp have left him unpresumptuous. Sex is far down the list of priorities.

The Story of a Brief Marriage gives, as its title suggests, a glimpse into a fledgling relationship formed under extreme circumstances. A pensive and tender portrait of how human beings reach for each other in times of need, the novel explores what it means to be alive when dignity has been stripped away.

Arudpragasam’s unadorned and measured prose serves his story well. In a style that recalls Primo Levi’s If This Is a Man, there is a sense of thought unfolding as Dinesh describes the horrors of the camp.

The reflective tone jars somewhat with the setting. It is perhaps more suited to a framework that looks back on atrocity, as Levi does with his Auschwitz-survivor literature, in contrast to Dinesh, who seeks to tell his story from within.

It nevertheless offers a searing picture of war. Dinesh can no longer remember the faces of his family. They are “like black and white outlines in a children’s colouring book”.

He recalls his mother collapsing on the road from starvation: “The body was lying where he vaguely expected, a large dark featureless shape on the ground. He knew it was his mother without having to look.”

Death in such an environment becomes incidental and is cleverly written as an aside. As Somasundaram makes his marriage pitch, he tells Dinesh that “Ganga, his daughter, his only child after her brother had been killed two weeks before, was a good girl”.

In an image that evokes Auschwitz, Dinesh can’t remember having seen “a single owl, heron, cuckoo, parrot or sparrow in the last months”. Meanwhile, simple acts such as going to the toilet, washing with a bar of lime-scented soap or clipping nails take on a sanctity.

Arudpragasam is studying for a doctorate in philosophy at Columbia University. He writes in English and Tamil and has an exquisite eye for detail amid the brutality. As bodies fall and precious items get discarded on the refugee marches, women cling to their possessions, piling on their best saris, “green, gold, and magenta, as if returning from a wedding or celebration that had not gone according to plan”.

At times, however, the writing can be overly reliant on simile, not trusting the descriptions themselves to do the work.

The book, which is less about the titular marriage than it is about atrocity as a whole, is at its most effective when it trusts its own admirable powers of depiction: “The air was thick with smoke and sulphur, impossible almost to breathe, and the outlines of everything seemed strangely warped – the singed skin and hair of a body, the glistening plastic of melting tents.” In other words, a landscape as far from a honeymoon as one could imagine.

Johnny Logan: ‘Dickie Rock is a legend in his own head... He lives in a fantasy world’
3