The Shining Path that led us to darkness: a priest’s novel about terror in Peru

I had to contribute to turning the swords of the seemingly mindless violence into the ploughshares of a better understanding of Peru, so I wrote Tempest in the Andes 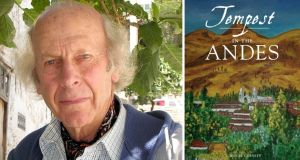 Miguel Garnett: as a priest and an artist, I felt that one had a moral duty to explore, and try to understand and explain, what was going on

In May 1980 the people of Peru went to the ballot box to engage in the democratic proccess of electing a civilian government after 11 years of military dictatorship, and in a small district of the central Andean deparment of Ayacucho an armed group burst into the polling station. They burned the ballot boxes. This marked the beginning of the Shining Path insurgency which was to last for more than a decade, cause 70,000 deaths and leave the country’s economy in ruins.

Initially we had no idea as to the nature of the Shining Path, but we were to discover that it was a radical Maoist movement dedicated to the creation of a socialist society almost along the radical lines of what Pol Pot attempted in Cambodia. For its part, the newly elected government at first dismissed the insurgency as a matter of civil disobedience to be dealt with by the police. However, the violence provoked by the insurgents soon made it clear that the armed forces would have to be called in, and the net result of this was that violence was used to tackle violence. Human rights were blithely ignored by both sides and the brunt of the civil war which was the outcome was borne by the indigenous population of the Andes. After the insurgency was crushed it was discovered that 70 per cent of the deaths had occurred among the indigenous Quechua and Aymara speaking populations of the Andes.

In many small towns the insurgents burst in and ordered the inhabitants to attend a rally in the main square. There would be a harangue about the aims of the Shining Path and then a “people’s trial” which could end with the summary execution of the mayor and any other government employees, plus those considered to be “enemies of the people”. When the military arrived there could be even worse violence involving rape and massacre.

Up in the north, where I live, we didn’t suffer anything like as much as the central and southern Andes, in part because there were vigilante groups in the countryside. However, we were affected by what was going on and for my own part I was the president of the local human rights committee. One popular misconception was that anyone who stood up for human rights must be a terrorist sympathiser. I recall that one morning a religious sister burst into my study and informed me that in the eyes of the local civil and military authorities I was the second most undesirable person in the city. “Who is the first most undesirable person?” I asked. “The bishop!” she replied. “Well,” I said, “I’m in good company.”

In the conflictive atmosphere I tried to explain to people that I was anti-terrorist, whether the terrorism came from the Shining Path or from the armed forces. On one occasion I gave a talk to the police and said: “You guys didn’t start the fire that is now destroying the country, but you were called in to put it out, and instead of your being given water you were given gasoline. Furthermore, as far as I can see, you and the insurgents have different maps of the country. Theirs does not require either roads or bridges, but yours does, so it is easy to ambush you.”

In the face of the insurgency draconian laws were introduced in order to prevent anyone writing in favor of the insurgents. To make any kind of apology for the insurgency was to run the risk of being arrested and tried as a terrorist. Needless to say, false accusations which had nothing to do with the aims of the Shining Path were not uncommon, like trying to grab a neighbour’s land or cattle. Nevertheless the anti-terrorist laws meant that virtually no poetry, no prose or theatre, emerged to examine what was going on. There was no open understanding that conflict is not necessarily 100 per cent bad. If we accept the “big bang” theory of the origin of the universe we can see that here conflict is creation, and, personally, I consider any act of writing a poem or a novel, painting or creating music, or any other artistic activity as a “little bang”. At the same time, as a priest and an artist, I felt that one had a moral duty to explore, and try to understand and explain, what was going on. I was entirely opposed to what the Shining Path was doing, but I could see that there were genuine reasons for protest in a society that was racist, unjust, corrupt, and provoked suffering. In this contest one can call to mind what Bishop Helder Cámara said in Brazil: “When I feed the poor I’m called a saint. When I ask why they are hungry I’m called a communist.”

Civil war, destruction, rape and death are all disastrous, but even out of conflicts something positive must come. Seamus Heaney didn’t shy away from the conflict in Northern Ireland. One friend in Ayacucho wrote a striking poem about the situation there and an excellent film called The Wolf’s Mouth was made. I felt that in some way I had to contribute to turning the swords of the seemingly mindless violence into the ploughshares of a better understanding of Peru. So I wrote Tempest in the Andes. I wrote in both Spanish and English, and the Spanish version seems to have done something to fulfil, at least in part, what I was attempting.

Until now, the English version has languished unread in an archive box. I now hope that thanks to the encouragement given to me by Fergus Mulligan this will change. I know that several good books have been written about the Shining Path insurgency since today one runs no risks by doing this. My only claim to justify the publication of this novel is that it was originally written when the fat was in the fire.

Tempest in the Andes is published by Fergus Mulligan Communications. It is available from fmcomms@indigo.ie for €15 inc. post and packing.

Taylor Swift: Why is it so difficult to support her?
5

Catherine Keener: ‘I did not know about Harvey Weinstein at all’
Real news has value SUBSCRIBE