The Rule of the Land review: A compelling take on the Border 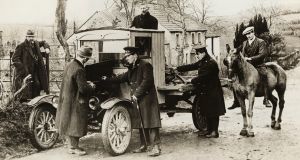 A Ford truck returning from the North is stopped at the Irish Free State border by customs officers and subjected to a thorough search. Photograph: George Rinhart/Corbis via Getty Images

Book Title:
The Rule of the Land: Walking Ireland’s Border

Since Garrett Carr began work on this engaging book, the Border between the South and the North of Ireland has acquired an extra significance. In the wake of Brexit it provides – or will provide – a frontier between the UK and the European Union. Carr notes this fact in his opening pages, but doesn’t make too much of it: his concern, he says, is to see what the Border “is doing on the ground, and in the water”. He sets out to travel its entire length, on foot and sometimes by boat, starting at the entrance to Carlingford Lough, heading north and then south again, round a curve and then steadily northwards until he reaches Donegal/Derry and the end of his journey.

All along the way, he holds Border images in his head, while at the same time letting his feet do the work on the ground, as he gets to grips with flora and fauna, bleak homesteads, stunted trees, abandoned customs posts, cows, steel gates, tractors and all.

Carr’s borderlands existed long before the present political border was thought of. From Carlingford, replete with Viking vestiges, to the great epic of the Táin – beginning, in Carr’s words, with a bit of regional bragging – and taking in the Iron Age earthworks known as as the Black Pig’s Dyke, the Border regions carry a distinctive historical and emotional charge.

There are continuities too. The Bloody Pass, named for an episode of slaughter during the Williamite wars, points forward to recent Troubles massacres like the Narrow Water bombing of 1979. Political violence, Carr says, is all about the Border – whether to accept it, or get rid of it.

The Border itself is especially accommodating of the kind of atrocity that requires clandestine manoeuvring, a deadly resolve, a knock in the night. Bogs and executions are a vivid memory in this Troubles-haunted place. Some of the Disappeared vanished into a bog by a fir plantation near Slieve Beagh, where three Border counties converge.

The Troubles changed the way the North/South dividing line was perceived. When it first came into being nearly a century ago, the Border became synonymous with a widespread smuggling enterprise that was fairly leniently regarded. What matter, people thought, if butter, cows or bicycles entered one or other of the newly-formed jurisdictions illicitly. Border smuggling was a way of protesting against the split imposed on the country, and of outwitting officialdom.

Later in the century, with guns and Semtex crossing into Northern Ireland, such instances of laissez-faire went by the board. A new form of terror cancelled out smuggling’s more enlivening aspects. Now, post-Troubles, derelict customs posts still dot the landscape, along with redundant army watchtowers and other reminders of recent military activity.

Before the ceasefires, the area as a battleground was particularly dire. The label “bandit country” for the whole of South Armagh was not unfittingly bestowed.

Carr is a mapmaker, and his title The Rule of the Land suggests a number of things about the Border: whom it is ruled by, the rules it abides by, the way its territories are marked out with a ruler. He is also an indefatigable scrutiniser of Border-related mores and events.

And, as he goes deeper into the implications of having a Border in the first place, he enters into a forceful engagement with history: social, economic, industrial, archaeological, agricultural, local warfare and even literary history (though the last is not predominant). Heaney is in with his bog poems, along with the Big House novel, William Carleton and the recent crime writer Brian McGilloway. The inspiration for William Trevor’s Ballroom of Romance is noted, still standing on a crossroads close to the Border, and distilling a powerful aura of 1950s homespun sociability and low aspiration.

However, when he reaches Belleek, Carr misses an opportunity to draw a parallel between a John Calder Bloomfield, who came to the village in 1849 and subsequently put it on the map as a centre of high-grade pottery, and William Allingham’s fictional “Laurence Bloomfield”, who inherits a rundown estate in Ireland and turns it into a model of cultivation and prosperity.

Carr tells the story of one, but the other, even with the coincidence of the names, escapes his attention. His interest is in real locations and the things that happened in them, and in the people he meets along the way, with their attitudes and grievances and countryman’s expertise. Border people.

Carr is sometimes subjected to the raillery of local know-alls, who delight in poking fun with an edge of derision. “If you find a cuckoo’s nest you should put it on your map,” sniggers one thick-set forester, pouncing on a slip of the author’s. An element of suspicion attends some encounters, suspicion bred of a long tradition of danger and ill-intent, from living on the edge. But mapmaker and intrepid walker Garrett Carr takes it all in his stride.

What marks him off from other Border commentators, and disarms incipient hostility, is his tolerant approach. If a critical note is sounded, it is only very faintly, or implicitly. He isn’t bothered by boy racers creating havoc in lanes better suited to donkeys and carts, crushed drinks cans in the undergrowth, or an unsightly enormity known as the Jesus Christ Hotel. (So called because people beholding it for the first time are apt to exclaim, “Jesus Christ!”)

He acknowledges a few of his predecessors along the same route, such as Richard Hayward with his Border Foray of 1957, but is very far from Hayward’s preoccupation with Border anomalies and absurdities. He doesn’t go in for jokes about the Border cutting houses and gardens in half. Like Seosamh Mac Grianna, like Robert Lloyd Praeger, Carr goes his own way, alert, dispassionate and idiosyncratic. He has written a great book about a compelling subject.

Patricia Craig is an author and critic. Her most recent book is Bookworm: a Memoir of Childhood Reading (2015).