The rise and rise of the ebook 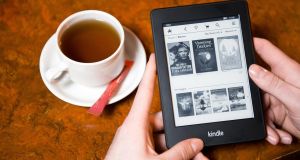 Reading now: a coffee and a Kindle. Photograph: Will Ireland/Future via Getty Images

When the first commercial ereaders were launched, in the late 1990s, the publishing industry expressed concern about the future of the paperback. Its apprehension was understandable. Ebooks offered a less expensive, more environmentally friendly alternative to the material book, as well as offering their purchasers the incomparable advantage of being able to store an entire library in a single device no bigger than a paperback and weighing considerably less.

Anxiety soon became an economic reality as authors began exploiting the digital novelty. Stephen King was the first big name to release a new book exclusively in eformat, and writers whose publishers were unwilling to take a risk on their work were able to launch it into the world with little outlay. Indeed, the publishing industry is now at a tipping point, with almost as many digital books being published as traditional paperbacks.

Elibraries now offer digital tomes to lenders (more than 1,000 titles are borrowed each month from Ireland’s public libraries), while etextbooks for teachers and students are readily available as blackboards give way to whiteboards and technology becomes an integral part of the way the curriculum is accessed.

If the books industry tends to see these advances as a threat, for the reader the changes have largely been positive. A reader’s chief concern remains the best way to get to a good story, historical or fictional; the value is not in the format but in the imagination fuelling it.

The ebook has opened up a range of new experiences to readers seeking something more than just escapism. For the reader, the relationship between digital and material modes of reading is not oppositional. The book as physical object may have the capacity to hold memories as well as stories within its thin paper sheets – dog-eared pages that mark our love of imagined worlds – but digital books offer the potential for a more interactive experience. Ebooks might actually be the saviours of the industry, engaging those for whom technology shapes the way they read the world.

It is a myth, however, that ebooks are cheap: there is, of course, the 20p book promoted by Amazon (current offers include Yann Martel’s Life of Pi , to coincide with Ang Lee’s film version, and John Lanchester’s Capital ), and many classic texts are available for free from sites such as gutenberg.org. But for new titles by big names you can expect to pay an average of ¤12.

For those who have yet to buy into the ebook phenomenon, the main financial concern is the initial investment required to access material. So if you are thinking of making the leap, the following are some considerations worth noting.

The basic ereader is book-sized, book-shaped and weighs about 170g. Screen sizes vary, although larger ones are better for perusing magazines and newspapers. The latest ereaders can hold up to 2,000 books, and many have options to add external memory.

Ebooks come in a variety of formats, some of which (Amazon’s Kindle and Apple’s iPad, for example) are ereader specific. The most widespread format for ebooks is epub, so if you are thinking of sharing books between devices, it is best to check what formats are supported by the reader.


Crisp text
Inert, the one-dimensional blank screen of an ereader offers little to entice the reader. In fact, research suggests that readers of all persuasions, digital and otherwise, still prefer to use bookshops for browsing titles. Once the ereader is switched on, the crisp digital text produced by the latest e-ink technology offers its own attraction. In most cases the books have been repaginated so that a single page is shrunk to fit the screen, and pages are turned easily by sliding a finger across them. The use of backlighting means that there is no screen glare, and you can read in sunshine as well as in the dark.

The standard ereader allows you to highlight text and make notes as you go. It is a minor inconvenience, particularly for those used to paperbacks, that most of them do not number pages in a traditional format. Instead, an indication near the bottom left-hand corner tells you your progress as a percentage of pages read.

An ereading device costs anything between ¤70 and ¤200, but you can download the free Kindle app to any computer, so you can try the ebook experience before you invest in a portable device.

If you have a smartphone, you already have a portable reading device, albeit one that is less ergonomic. Indeed, it has been predicted that ereaders will soon be offered free by companies such as Amazon, with readers paying for content only, through contracts with the publishers.

The market for ereaders is shrinking in the face of newer technologies. Anyone interested in experiencing ereading for the first time might be wiser to buy a tablet computer, which offers ereader functions alongside a host of other tools, such as video and camera, many of which have been harnessed by apps to enhance the reading experience.

Imagine a version of Dr Seuss where you can compose and illustrate your own wordplay, or TS Eliot’s The Waste Land in its original manuscript version, with passages read by the author himself. Although traditional ereaders have lately begun to expand their functionality (the Kindle Fire offers the potential for internet browsing), apps available on tablet-style readers bring exciting new possibilities to traditional engagement with books.

Over the next few monthly columns I plan to bring you suggestions, reviews and news from the evolving ereading world.

Melania Trump: ‘A sphinx with a rubber eraser in place of a tail’
3