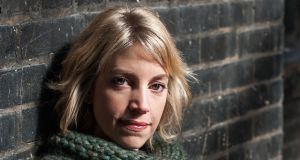 “If all this blood is your blood you’ll be dead soon.” It’s a line that stands out in the opening chapter of Sarah Henstra’s debut novel The Red Word, as narrator Karen Huls is prompted to remember her college days in the mid-1990s by a phone call informing her about the death of an old classmate. In a lesser novel, the line could be a cheap hook left dangling for the reader. In The Red Word the hook is almost incidental, our interest already piqued in a few short pages by Henstra’s incisive writing and her timely, provocative subject matter.

Novels that fail at suspense are those that heavily signpost momentous happenings without first giving the reader a chance to care about the world or characters. But there is a special kind of pleasure in books that combine a good hook with fine prose and intelligent ideas. From Thomas Hardy’s A Pair of Blue Eyes – which coined the term cliff-hanger after a character tries to retrieve his hat on a windy day – to contemporary classics like Donna Tartt’s The Secret History, good suspense narratives hold our interest by raising questions: whodunnit; what will happen; and perhaps most important of all, why did it come to pass?

Tartt’s debut is an obvious comparison for Henstra’s novel. Both books are set at elite, Wasp-ish American colleges and focus on a set of high-achieving, articulate (and sometimes obnoxious) students. Like Tartt, Henstra has an acerbic, intelligent style that works well for her takedown of campus frat culture in The Red Word. There are also echoes of Margaret Atwood’s Cat’s Eye and Curtis Sittenfeld’s Prep.

Henstra’s story sees Karen, a smart and upwardly mobile freshman from Canada, blag her way into a house share with radical feminists. Already living in the archly titled Raghurst are three lesbian students – the uncompromising activist Dyann, deep thinker Steph, French student Marie-Jeanne – and a bohemian bisexual, Charla. Karen is very much the outsider: a heterosexual party girl who dates a frat boy from Gamma Beta Chi, or Gang Bang Culture as it’s known on campus.

As the Raghurst women set out to expose rape culture at the college, a gripping plot emerges that for the most part bears the book’s intellectual ideas lightly on its shoulders. Recalling Tartt once again, Henstra uses an enigmatic, revered teacher figure, Dr Esterhazy, as a way to expound on gender and myth throughout the novel, but her take on student-teacher adoration is unique and memorable. The girls’ obsession with Esterhazy results in frequent discussions about myth, gender, sex, the subjugation of women throughout history and the misguided assumption that they will “use the master’s tools to dismantle the master’s house”. It is a plan that involves human sacrifice, date rape drugs and gang bangs, a plan that is morally complex, flawed and hugely engrossing as the reader anticipates the fallout.

Henstra gets carried away with the mythologising in the book’s final quarter, where Karen is given to frequent dramatic outbursts on the downfall of various characters, particularly the group’s de facto leader Dyann: “O farseeing Dyann, swinging her axe, cutting the world down to its roots; Look how they are ennobled by loss, valourvaunted by grief. O warmaking Dyann, thou stark of courage, where are you now when I need you?” Some random allusions to Ireland – an inquiry about Samhain, a line on the festival of Imbolc, “in Ireland it was the Feast of St Brigid” – feel forced in a book set on an American campus and one wonders at their inclusion. The dramatic scenes as the novel reaches its climax could do with more space between them for readers to reflect on their significance.

But these are minor issues in a major novel whose author writes sensitively and fluently on sex, desire, rape and power. It is easy to see why The Red Word won the prestigious 2018 Governor-General’s Literary Award in Henstra’s home country, Canada. Her novel is an almost seamless mix of high and low cultures that offers a timely treatise on rape culture in elite universities. Karen parties hard at GBC: “I kept drinking until I couldn’t feel my own skin, until I was wearing my own face strapped around my head.” But she is also a vital witness to life within the frat: “There was no past and no future in the frat house except the recent and local past and future: that time Blackie puked on that girl, that party with the State cheerleaders coming up in January. There was no abstract thought. There were no consequences to anything … Frat boys were like marines in their derision of weakness, their dogged pleasure in disgracing the fallen.”

Karen is in a seemingly privileged position, the girlfriend of a “brother”, but in Henstra’s whipsmart narrative the dangerous double standards soon emerge: “Remember that whole discussion you guys were having a while back, about ‘rapeability’?” Karen asks her boyfriend Mike. “Remember how you were all saying some girls are just more ‘rapeable’ than others?” His answer chillingly sums up the culture and one of the central tenets of this thoroughly engaging novel: “They didn’t mean you.”