The Politics of Judicial Selection in Ireland review: thorough and fair

This book by an author of unusual but apt pedigree packs in a lot of new, useful information in a field crying out for it. It is also timely and so is likely to be influential 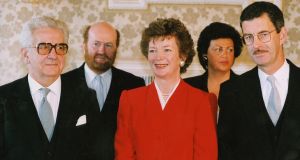 Book Title:
The Politics of Judicial Selection in Ireland

It is reasonable to date this subject from the appointment of Harry Whelehan, as President of the High Court. This appointment was made on the basis of Albert Reynolds’ belief that an Attorney General has first claim on any judicial vacancy arising during his time in office. The consequences of this episode included: the almost immediate resignation of Whelehan, the fall of the Fianna Fáil-Labour coalition and eventually the establishment, in 1995, of the Judicial Appointments Advisory Board (JAAB).

In any country, the selection of judges is plainly a delicate and significant task because a respected and reliable judiciary is the key to a functioning legal system. Which is why, to me, the major object of scandal and concern emanating from the US, these days, is not Donald Trump, but the Senate’s failure to co-operate in the appointment of the crucial ninth member of the Supreme Court.

Going back to the JAAB, its membership consists of: the Chief Justice and Presidents of the High, Circuit and District Courts, Attorney General, a nominee each of the Bar Council and Law Society and three lay-people chosen by the Minister for Justice.

Its brief includes appointments to all the four courts. But there are two exceptions where the JAAB is not involved: the Presidents of each court or where any vacancy is filled by way of promotion of a judge from the court below.

The board is advisory, which means that its role is to screen applicants so as to present to the Government at least seven qualified candidates. But, in about 2001, after taking counsel’s opinion on the legislation setting it up, the board shifted its procedure to recommend “all those who were not unsuitable”. This interpretation, which the writer calls “overly narrow”, was based on the view that the previous practice trespassed on the Government’s prerogative to recommend judicial appointees to the President.

The important practical point here is that the discretion left to the Government, already significant when the figure was at seven, was substantially increased by this development. As can perhaps be imagined, the Government’s decision is not taken at a Government meeting, but by the Taoiseach, Attorney General, Minister for Justice and leader of any minority party in the Government.

Until this book, the main empirical survey of the Irish judges’ political affiliations, education, careers, etc was that carried out by a visiting American scholar, Philip Bartholomew, in 1969 (yes, I know). Accordingly, one turns hungrily to the long chapter, in this book, which reports a thorough survey of the inner workings of the JAAB and the Government, in relation to judicial appointments, during 1982-2007. This is 12 years before and 12 years after the establishment of JAAB. (One should note that the period 2011-16, when concern was voiced at certain appointments to the High Court, is not included).

For this survey, interviews were conducted with: two taoisigh, nine attorneys general, six ministers for justice and 19 members of the board.

Several features emerge. One is that it is difficult for the lay members of JAAB or where non-Dublin candidates are involved, even legal members, to have any impression of a candidate’s quality. This obstacle arises partly because of the board’s refusal to hold interviews. As the reader can imagine, this omission is explained (hardly justified) by: the time it would take; deference to the candidates; or, in the case of the legal members, that often they have worked beside the candidates for 30 years.

Again, paradoxically, there is more controversy around appointments to the District Court (sometimes involving solicitors who have got into difficulties with their practice) than the higher courts.

Thus former minister for justice John O’Donoghue is quoted as telling the Dáil: “Since I took office, I have received over 40 representations from members of the Oireachtas. Eight persons, on whose behalf representations were made, were subsequently appointed.”

Another strong chapter collects the currents of change which are building up in favour of reform. Among these are: Alan Shatter’s consultation in 2013-14, which elicited 27 responses, among them a substantial memo in favour of change, from the judges; private members’ Bills; and the Oireachtas Committee on Justice Report 2014.

The wider political science point here is that, to judge by developments in other states which have gone further and faster than the JAAB, if a reform is preceded by wide public discussion, it is more likely to be respected and extended. But, in Ireland, as mentioned, the JAAB came as a briefly discussed reaction to a broader crisis.

This book, then, is a thorough and fair treatment, packing in a lot of new and useful information in a field which was crying out for it. It is also timely and so is likely to influence the necessary changes, which seem to be on the way. Not, I hasten to add, that any very radical change is necessary: in terms of judicial independence, Ireland ranks third in Europe and fourth in the Wold (World Economic Forum Global Competitiveness Report, 2014-15)

The pedigree of the author is unusual and, I think, unusually apt, for this work. Too often, those of us who comment have not been in the heat of the battle. But Dr Carroll MacNeill has been a political scientist, practicing lawyer, legal advisor in the Fine Gael’s leader’s office and special adviser in the Department of Justice.

Perhaps a little because of this, the choicest fish of the legal-political world swam contentedly, at the book- launch, held at the Royal Irish Academy. The press photographers were saying anxiously ‘ which of these is a judge?’, just as visitors to a game reserve might say ‘where are the Lions’.

With the Ministers of Justice and Social Protection in attendance, the Taoiseach gave the encomium, promising - and here is the big news - to reduce, to three, the number of nominees which JAAB must proffer to the Government. He explained that it was the fault of the Constitution that the Government had to be involved at all. Such was the air of bibulous bonhomie that no one was loutish enough to ask why that Article of the Constitution could not have been changed at the same time as the judicial pensions amendment was made, in 2011.

David Gwynn Morgan is an Emeritus Professor of Law, at University College, Cork