The Pigeon Tunnel review: The spy who kept his life story on hold 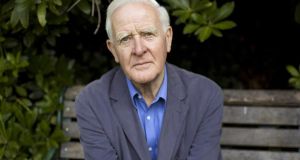 John le Carré: ‘As a maker of fictions, I invent versions of myself.’ Photograph: David Azia/The New York Times

Book Title:
The Pigeon Tunnel: Stories from My Life

When novelist John le Carré first considered the possibility of writing an autobiography, he found himself delivering to a pair of private detectives the following assessment of his character: “I’m a liar . . . Born to lying, bred to it, trained to it by an industry that lies for a living, practised in it as a novelist. As a maker of fictions, I invent versions of myself.”

Le Carré was addressing the detectives in this way because he wanted them to help establish a factual record of his life. Once that record was in place, he would publish it alongside his own version, forged only from the material that resided in his mind: “That way my readers will see to what extent an old writer’s memory is the whore of his imagination.”

This anecdote appears towards the end of The Pigeon Tunnel: Stories from My Life, a work of memoir that thankfully does not conform to the description of the book envisaged above. Instead, over the course of 38 short chapters, le Carré offers us a series of “true stories told from memory”. Though they do not proceed chronologically, his hope is that they will achieve a certain thematic coherence.

Our kind of spy

Most of the coherence is provided by le Carré’s relationship with the world of espionage. He was inducted into MI5 as a junior officer in 1956, at the age of 25. He moved to MI6 in 1961 and left the Service at the age of 33.

There are also the memorable or amusing encounters (many of which take place somewhere dangerous) and the friendships he has experienced with poets, politicians, journalists, spies, actors, directors and assorted goons and crooks from around the world.

There is an account of an intimate lunch with Joseph Brodsky, during which Brodsky discovers he has been awarded the Nobel Prize in Literature; of an evening dancing with Yasser Arafat; of a conversation with the journalist Michael Elkins, in which Elkins emerges as a possible killer of surviving Nazis; of an interview with the former British spy Nicholas Elliot; of his friendship with sometime colleague – and extreme traitor – Kim Philby; and of a nightclub meeting with a Russian Mafia boss that concludes with le Carré being advised, by the boss, to “f**k off”.

Somewhere within most of these episodes lurk the shadows of le Carré’s unhappy childhood and troubled relationship with his parents. His mother he describes as a woman who never hugged him and whom he never understood. His unbelievable father – the subject of a long, funny and affecting chapter towards the end of the book – was a charmer, con man, chancer, philanderer, shit.

Le Carré relates this material with pace, energy and elegance. He has a talent for identifying and describing the animating and resonant moments of his tales, and he covers his own part in them with self-deprecation (sometimes) and attempted disinterest (often). He is good company: a decent, generous, empathetic man who can also, on occasion, be funny – especially when chronicling moments of thwartedness and exasperation.

There are shortcomings. The book as a whole tends to eddy rather than build, and there is a near-pathological carelessness to le Carré’s prose. If there is a cliche available for a situation he wants to describe, you can be sure you are about to meet it: over the course of the book (this list is not exhaustive) we get “boned up”, “trot them out”, “giving as good as he got”, “won’t ring many bells”, “crack of dawn”, “cheek by jowl”, “gritted teeth”, “ticked a lot of boxes”, “axe to grind”, “the penny drops”, “scared stiff”, “never going to be an easy ride at the best of times” and, sublimely, “As every schoolchild knows, anyone with a murky past is a sitting duck for blackmail”.

This inattentiveness diminishes the force and resonance of le Carré’s vignettes, and divests the book as a whole of emotional and aesthetic weight. You read The Pigeon Tunnel with great speed and pleasure. But, in the end, it feels as fugitive and insubstantial as an invented version of the self.

Matthew Adams has written for a number of publications, including the ‘TLS’, ‘The Literary Review’ and ‘The Spectator’