Julie Parsons: In a new series, every week this year the author will write about one of her favourite books 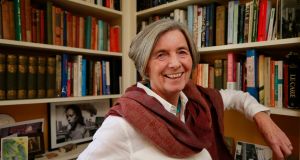 Julie Parsons surrounded by her books: “They are my favourite books. I’ve read most of them more than once. They are the books to which I turn in the middle of the night, when the cares of the world press down and sleep is longed for but elusive.” Photograph: Nick Bradshaw

I stand in front of my book shelves. There are books here which I’ve had since I was a child. Packed up and shipped in an old tin trunk all the way from New Zealand 54 years ago. Their covers are tattered, worn and faded. There is a row of tall green hard backs, their spines decorated with gold leaf which spells out The Novels of the Sisters Brontë, passed down from my grandmother Elsie Purefoy to my mother, Elizabeth Chamberlain, and thence to me.

The shelves are crammed with a collection of hardbacks and paperbacks. A haphazard collection it must be said. Fiction and non-fiction jumbled up together. Not a hint of order or category. They could be the shelves of any old secondhand shop. But one thing unites them. They are my favourite books. I’ve read most of them more than once. They are the books to which I turn in the middle of the night, when the cares of the world press down and sleep is longed for but elusive.

Like The Long View by Elizabeth Jane Howard (1956), the story of a marriage, told backwards from despair to hope; Ruth Rendell’s A Fatal Inversion (1987) which showed me how to write a thriller and The Vanishing (1993) by Tim Krabbe, whose 108 devastating pages demonstrated how to break all the rules. Guest of Honour (1970), Nadine Gordimer’s analysis of the transition of an African colony to independence and the corruption which accompanies it.

Books I read as a child. The wonderful Thunderhead (1943) by Mary O’Hara and Mary Treadgold’s We Couldn’t Leave Dinah (1941), which managed to combine two of my childhood preoccupations, horses and the horrors of the second World War. Books I sneaked from my mother’s bedside table. Alberto Moravia’s The Woman of Rome (1947), the city in the aftermath of Nazi occupation, its women at the mercy of the American soldiers who now hold power, and A Diary of Love (1953) written by the American writer, Maude Hutchins. A writer who’s forgotten now but who weaves the story of Noel, a wealthy young woman, orphaned, struck down by TB, and her interior life, her fantasies, suffused with eroticism.

Margaret Drabble’s The Millstone (1965), the story of Rosamund, a defiantly unmarried mother in 1960s’ London; Life and Fate (1960) where Vasily Grossman dumps the reader in the gas chambers of Auschwitz then takes them into the brooding presence of Stalin as he plots in Moscow. Truman Capote’s In Cold Blood (1966) which revolutionised non-fiction. And even my favourite cookery books, Elizabeth David’s classic Italian Cooking (1942) and Claudia Roden’s Book Of Jewish Food (1997) which I continue to use all the time.

So I’ve made a list. It’s a personal choice. Perhaps it’s the history of my life, or perhaps it’s just a collection of good books. Either way read them, enjoy them and next time you pass a secondhand shop drop in. You never know what wonders you’ll find.

Julie Parsons’ latest novel, The Therapy House, won Crime Novel of the Year at the 2017 Irish Book Awards. Every week this year, she will write about one of her favourite books

I had never read anything by Elizabeth Jane Howard until I came across a copy of The Long View in a secondhand shop in the 1970s. I bought it because it was a lovely little hardback with a paper cover, more or less intact. I had no expectations of it as a novel. I can remember sitting in a sagging armchair in a student flat on Pembroke Road and not lifting my head until I was finished. Then I went back and started again.

The Long View begins in 1950. Mrs Fleming, Antonia, is organising a dinner party to celebrate her son Julian’s engagement. The Flemings are comfortable, London middle class. Money is not an issue; happiness most certainly is. Antonia’s marriage to Conrad Fleming is distintegrating. The book tracks backwards to 1926, following them through their life together, their engagement and courtship.

Structurally it is a triumph. Emotionally, despite the niceties of polite English society, it is raw and powerful. The characters are vividly described. Conrad “has a heart when he chose to use it. But on the whole he did not care in the least about other people.” Antonia has been moulded into the perfect wife. But she has had enough. She says: “The very early morning was the worst time: the frightful half-conscious moments when catching up with the present.” Twenty-first century readers might find the language mannered and stylised, but the story of loss, betrayal, disappointment and pain is as savage now as it was when first published.

Elizabeth Jane Howard married three times. Each ended badly. Her Cazalet Chronicles, huge best sellers and TV series, made her a star. It is hard not to see her own life filtered through her fiction. I hope that eventually the happiness which had eluded her as a young woman transformed her life in her older years.

9. Doris Lessing: The Summer Before the Dark (Jonathan Cape 1973)

26. Alexander Solzhenitsyn: A Day In The Life of Ivan Denisovitch (Novy Mir 1962)

Douglas Stuart on writing Shuggie Bain: 'It was a difficult process'
2