Czarist crown jewels, a red scare and UN veto: Ireland and the USSR 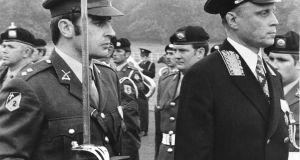 Anatoli Kaplin, right, the first ambassador of the USSR, inspects a guard of honour at Áras an Uachtaráin in 1974. Photograph: Eddie Kelly

This year marks the centenary of the Russian Revolution which brought into existence the first communist state and the transformation of the imperial czarist court into the USSR, the Union of Soviet Socialist Republics. Readers will be more than familiar with the subsequent collapse of the Soviet Union in 1991 and with it, the disintegration of communism throughout central and eastern Europe. But it will come as a surprise to most Irish readers that diplomatic relations between the emerging independent Irish State and Soviet Russia began very soon after 1917.

When Éamon de Valera was in the United States in 1919, along with other prominent Irishmen, such as Harry Boland and Big Jim Larkin, contact was made with two representatives of the newly established Soviet Union. Ludwig Karl Martens and Santeri Nuorteva, who were based in the United States. They had already met the Irish politician Dr Patrick McCartan and subsequently were introduced to Boland. The Soviet representatives, short of money, developed such a strong relationship with the Irish that de Valera, now with significant funds, authorised two loans of $20,000, one of which was secured with a cardboard box containing an array of diamonds, sapphires, and ruby brooches. They were, the Irishmen were told, the Czarist crown jewels. But now they were deemed to be the property of the Soviet Union. What happened to them and how they were ultimately accounted for is but one of many interesting and intriguing stories and events which are contained in this work of history.

The book is divided into two parts. The first deals with Irish-Soviet diplomatic affairs starting from the earliest contacts, even before the Irish Free State was established in 1922. The second part is devoted to Irish political and cultural relations, both North and South, with different parts of the Soviet system and the Communist Party. There is an extensive description of Irish-Soviet contacts and exchanges at both the League of Nations and the United Nations, covering in particular the periods from 1934 to 1939, which saw the effective collapse of the League of Nations.

Ireland was not a founding member of the United Nations in 1946. The Soviet Union vetoed our admission on the grounds that Ireland had been neutral during the second World War. We were not alone. It was not until 1955 that the impasse was resolved and 15 new member states were admitted, including Ireland. Frederick Boland was the first Irish Permanent Representative in the UN. He had a very impressive diplomatic career and was ultimately elected as President of the General Assembly. This was considered a particular honour for himself but also for Ireland.

Liam Cosgrave, as minister for foreign affairs, was Ireland’s first politician to address the United Nations General Assembly. He was followed by Frank Aiken, who succeeded him in 1957 when de Valera was re-elected taoiseach. The book describes, in considerable detail, how Aiken became a serious player in the United Nations. He was aided by Boland and his officials, including Conor Cruise O’Brien. This was the time of serious Cold War rivalry, particularly between the US and the USSR.

The Chinese permanent seat on the Security Council was at that time held by Formosa, now known as Taiwan, despite having lost the civil war to the communists. The People’s Republic of China claimed to be the rightful occupants but were blocked by the US and her allies. Irish government policy, up to then, supported the American position. So when Aiken voted against the US there was uproar at home in the Dáil but also in America, particularly with the Catholic Church.

The author describes this whole saga well and particularly how the Irish and Soviet diplomats interacted on this and other issues. Frank Aiken spent a lot of time at the UN. With that time, he ultimately persuaded the Soviets and the Americans, along with their respective allies, to bring into international law the Nuclear Non-Proliferation Treaty. His efforts were publicly recognised. This is all well described in the book.

Diplomatic Relations between Ireland and the Soviet Union were agreed in the early 1970s with embassies being opened, first in Dublin and then in Moscow. Garret FitzGerald was at the ceremonies in Russia and strengthened relations with the Soviet Union now that Ireland was a member of the EEC. Edward Brennan was Ireland’s first ambassador in Moscow. As such, he was involved in the regular political co-ordination meetings of the EEC ambassadors. This was a new political experience for Ireland. Brennan’s political reports were an important source of information to the Irish Government now that Ireland was developing and deepening its relationship with the rest of the member states of the EEC.

The second part of the book is very different from the first, but just as interesting. It deals directly with Irish people and Irish organisations who had contacts with the Soviet Union. This relationship had various formats, starting with formal organisation, The Irish Friends of the Soviet Union, 1928 to 1937, the Irish-USSR Society 1945 to 1966, The Soviet Friendship Societies of Northern Ireland, 1945 to 1966. The final organisation was known as the Irish-USSR Society, 1966-1992. This whole history, for younger readers in particular, will be a revaluation.

During the period before the second World War and the Cold War, anti-communism in Ireland, fuelled by the Catholic Church, was extremely strong and powerful. One example, which is well covered in the book, described the experience of seven independent Irishmen who made a three-week tour of the USSR in 1955, assisted by the Soviet Friendship Society in Ireland. Their visit, which was made public at the time, caused uproar across the country. The description of the visitors’ experience in the USSR and subsequent controversy, are, in today’s context most interesting, if not even comical. One member of the group, Jim Plunkett, the author of Strumpet City, the novel about the 1913 Dublin Lock-Out, was asked by one journalist how much had he learned from his visit to the USSR he replied: “Not much, but I learned a hell of a lot about Ireland!”

Communism in Ireland, in its various forms, both in the Republic and in Northern Ireland, was never really a strong political force, as the book reveals. But its story, as set out and told in this book, remains fascinating. An aspect of all of this will be for many readers the range and level of contact, over many years, between Ireland and the USSR up to its disintegration.

This very readable book by Michael Quinn (no relation) contains interesting revelations which are unique and so of real interest to the curious. It started out life as a PhD thesis in NUI Maynooth and is full of detailed research, complete with references to multiple sources and with appendices and a bibliography. Not many PhD theses convert into a good historical read. This one most certainly has done so.

Ruairí Quinn is a former leader of the Labour Party