The mystery of love: The job is to build in hope 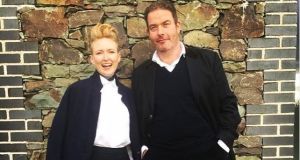 The author and his partner Áine

There is a picture of my partner Áine taken two years ago in a garden in Lisbon. She’s wearing a white linen shirt that hasn’t been ironed – it looks better that way – and her pyjama bottoms are bright with green and white pineapples. The table she’s sitting at is set for breakfast. Pushed aside for the breakfast things is an iPad, upon which is a partial manuscript for a book called The Mystery of Love.

The phrase belongs to Oscar Wilde, who in Salomé deems it greater than the mystery of death. There is no arguing with that. But it was Wilde I was holding to account for the fact that I was up too early on holiday – the breakfast in that photograph was still hours away.

The Mystery of Love begins near the end. If you know how a story ends, and you know that everything and everyone in it is supposed to be doomed from the start, how foolish is it to think of optimism? Or at least uncertainty.

Constance Wilde is in Europe making a new life with her children when some unexpected news forces her to recall the first time she met her husband. At first there is a public Oscar and a private one and she is the only one who gets to glimpse the latter. The Mystery of Love is her story, and the husband, when he appears, does so in footnotes. A life that starts off as an adventure ends in a domestic arrangement as complicated as the lies they tell themselves and each other. Only as they explore the secret territory of parenting, does she become aware that any happiness she has attained is different from the happiness of which she’s dreamed.

ONE OF THESE DAYS, when I’m more in need of it, I will start believing in magic. For the time being, I prefer to believe in the superpower of beautiful, explainable happenings. But I can recall the times when I felt the ire of Constance’s ghost. I was certain of her appraisal. And that morning in Lisbon, I was sure that she had made the voyage – from a dim world to a sunny one – in order to say so.

I plagued her with questions (which is no way to treat a guest). Was there good faith as well as bad? Of course, came the answer. And denial? There had to be the shapes of denial. The helpless feeling of being estranged from the one with whom you feel you truly belong.

I had that morning reached the point in the manuscript where, after the birth of their second child, Constance’s life becomes a place of siege. And nothing I could say to the ghost was going to give her the means of escape. It felt inappropriate to even try. You see, I wanted to help but I couldn’t: I couldn’t help because I knew how it ended.

I could sense the ghost’s disapproval. She was saying: Constance knew fine well all that was going on. You don’t have to inflict more of it on her. And, on this advice, I decided to take a break from work.

Then I decided to take a break from taking a break. Very soon I was not working, and I was not on holiday. And when we experience angst about things we haven’t done, often we make plans for other things that we mightn’t do. But a plan is a plan, and the plan for the day evolved into a decision to abandon the manuscript altogether.

I WENT TO LOOK IN ON ÁINE. My side of the bed was in disarray – I’m a fidget – but she wakes up in the position in which she has fallen asleep. She sleeps with a smile on her face. That’s the truth. I wouldn’t dream of waking her, but when she came around she pottered out to the garden where she began to set the table for breakfast. This is a person who will set the table to eat an apple. She’s big on the nuts and seeds – her midweek dinners often resemble the stuff you’d feed to a pony – so there was a fine big tray of nice things for having in the morning sun. The sourest yoghurt and honey, cherries and fresh goat’s cheese whiter than lab-coats. I love the way Áine unwraps cheese. I love it more than any book I’ll ever write.

We began talking about our plans for the day. From the centre of Lisbon, the beach at Costa da Caparica is a couple of buses, a boat and a train away. We’ve been there many times. We dread the schlep but we enjoy making it. The Atlantic is bracing and exuberant, and it’s very big. And when we’re on the way home from the beach – altered by percussive waves and all that salt – we always say that, despite the journey, we should go there every day.

Áine is a research scientist. She knows a thing or two about asking questions. But she did not say anything about my predicament. She did not do anything to suggest that she knew that I had been electrified by uselessness.

For how on earth do you justify the act of upsetting a ghost? How can anyone bear to rummage around in another person’s sadness, in their denial? How do you express their confusion with any clarity?

If you’ll allow me a brick wall of abstract adjectives, the story of Constance’s love for Oscar – and his for her – is at any one moment characterised by: fear, ambition, abjection, duty, disgust, joy, puzzlement, patience, impatience, lust, duty, tension, boredom and tender care.

The only way to see through that wall is with the aid of another abstraction. I was starting to think that The Mystery of Love had everything to do with mercy, and that Constance – who was most need of it – had to be the one to show it. Forget ghosts, it was Áine’s presence at the breakfast table, and her presence in the world, that was enough to allow a new telling of The Mystery of Love to emerge.

(It will be enough to keep me going for the rest of my life.)

So, if you know how a story ends, how foolish is it to think of hope? But isn’t what we should set out to do, isn’t that our job, to build in hope? And by the time we were washing up and heading down the hill to the ferry terminal – bus, boat, bus, small train, in that order – I had resolved to push on. We’ll push on to the end.

The Mystery of Love by Andrew Meehan is published by Apollo, at £18.99. It is reviewed in The Irish Times this Saturday.

‘I was shattered’ – Paul Weller, Booker T and more on the day The Beatles split
Real news has value SUBSCRIBE