The Ministry of Utmost Happiness by Arundhati Roy review: all too obvious 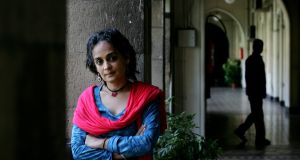 Arundhati Roy: Her new novel is at least less ponderous than her overrated debut, ‘The God of Small Things’, which won the Booker Prize in 1997. Photograph: Getty Images

How to begin? Well, the action, such as it is, of Arundhati Roy’s chaotic second novel largely takes place in a graveyard. It is a busy base camp and home to Anjum, one of the central characters. Towering drama queen Anjum moved there after years of living in the Khwabgah with the other Hijras, exotic transgender creatures born to give sexual pleasure to others, while receiving none in return. At the age of 46, she goes to live in the graveyard “like a tree”. She had begun life as Aftab, a much wanted son; her loving mother understood her dilemma. Her scholarly father merely lamented fate’s cruelty, seeking comfort from poetry.

Within pages of this messy and superficial but good-natured narrative, a sensation of deja vu takes over. It becomes apparent that Roy is gamely striving for a Rushdie-like concoction while failing to replicate his trademark bombastic flourish.

True to her campaigning instincts, Roy the activist is soon referring to the tragic history of her country. “Then came Partition. God’s carotid burst open on the new border between India and Pakistan and a million people died of hatred.” The graveyard, as is obvious, is a metaphor for India. But then everything is obvious in The Ministry of Utmost Happiness.

Despite the violence and the brutality, religious tensions and emphasis on varying darkness of skin colour, the underlying tone is hopeful, which should be acknowledged as the narrative is so ramshackle and randomly conceived, a reader could easily lose interest – and probably will.

About the most interesting aspect is Roy’s determined cheerfulness. That is not to suggest the book is funny or even amusing; it is not. Roy is not witty although the prose is slangy and often achieves a situation comedy-like banter. Yet it is far less ponderous than her overrated debut, The God of Small Things, which unexpectedly won her the Booker Prize in 1997 ahead of Jim Crace’s outstanding biblical epic Quarantine, not to mention Tim Parks’s Europa and Bernard MacLaverty’s limpid Grace Notes.

For fear this review reads as a grudge match, it seems only fair to mention that months before its Booker success, which duly made it an international bestseller, The God of Small Things struck me as a sentimental popular romance, suspended between the grotesque and crypto-magic realism. It centres on the accidental death by drowning of a half-English little girl and how it affects the subsequent lives of her cousins, fraternal twins who are reunited in their 30s. Added to this is their extended family, a clan of caricatured Anglophiles straight out of central casting. It did have a plot, sort of.

At best, The God of Small Things, with its rhetoric and strained lyricism, arrives at a level of designer exotic. Characterisation is limited to physical description such as “she had absurdly beautiful collarbones”. This time bodies are more grotesque, and hair also features. Roy’s major difficulty as an artist is that her polemical instinct is far more developed than her art.

By contrast, many leading, if far less famous, Indian writers working in English are superb stylists blessed with comic flair. Only the year before her Booker triumph, Roy’s countryman Rohinton Mistry was Booker shortlisted for A Fine Balance, a compelling, baggy monster which lost out to Graham Swift’s Last Orders. Anyone considering reading The Ministry of Utmost Happiness might prefer instead to look towards Mistry, a superior writer.

Get away with it

Roy’s new book resonates with the confidence of a writer aware she can now get away with anything, and has, so the narrative slides between the two-dimensional characters and stark factual anecdotes such as “ . . . the news from Gujarat was horrible. A railway coach had been set on fire by what the newspapers first called ‘miscreants’. Sixty Hindu pilgrims were burned alive. They were on their way home from a trip to Ayodhya where they had carried ceremonial bricks to lay in the foundations of a grand temple they wanted to construct at the site where an old mosque once stood . . . the police arrested hundreds of Muslims – all auxiliary Pakistanis from their point of view – from the area around the railway station under the new terrorism law and threw them into prison.”

Elsewhere, there are beatings and inhuman rape attacks; so much death and abandoned babies. It is a world of poverty confronted with jaunty survival and fellowship.

The third person yields to a first person voiced by one of three men besotted by the beautiful, unworldly activist Tilottama, or Tilo, who lives on air and “had always reminded” one of the trio, Naga, whom she married, of singer Billie Holiday. “Not the woman so much as her voice. If it were possible for a human being to evoke a voice, a sound, than for Naga, Tilo evoked Billie Holiday’s voice – she had that same quality of limbering, heart-stopping, fucked-up unexpectedness to her.”

Tilo may be the prevailing consciousness of the narrative as Anjum, who enjoys peeing in the street, proves insufficiently capable of carrying a directionless novel desperately in need of even a few token set pieces. Highly political and heroic, Tilo puts pen to paper: “Dear Doctor, I am witness to a curious scientific phenomenon. Two bulls live in the service lane outside my flat. In the daytime they appear quite normal, but at night they grow tall – I think the word might be ‘elevate’ – and stare at me through my second-floor window.”

Elsewhere Tilo questions the ethics of breeding giant trout, and wonders who will feed them. Her mind races: “These days one is never really sure” if “an ear of corn is actually a leg of pork or a beef steak”.

There is relatively little dialogue, as Roy prefers to overdescribe and overexplain. The graveyard is a neighbourhood as well as a school and a zoo. Kashmir, the environment, national security, domestic violence, feminism and the outrages committed against chickens in the name of increased productivity all feature. “To tell a shattered story,” claims Tilo in one of her poems, one should slowly become everything.

“Everything” is not quite the same as “anything” – and “anything” certainly sums up Roy’s storytelling. The kindest comment to make about this formless, overhyped and conventional performance is that reading it is comparable to spending years knitting a giant sweater only to discover that it actually has three sleeves.