The microscopic magic of Mary Lavin

The first book-length critical study of the writer’s work in 33 years is timely, vibrant and necessary 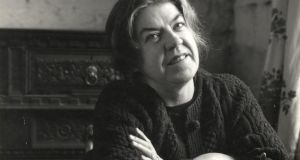 Mary Lavin: this collection of essays may signal the first stage of her full-scale re-emergence

Mary Lavin often compared writing a short story, her chosen form for five decades, to examining a slide under a microscope. She was careful to distinguish the microscopic from “the miniature”, the doll’s-house world of containable nostalgia. “A microscope magnifies,” she elaborated in a 1979 interview. “A snowstorm can be an immensely impressive sight, but a single snowflake under a magnifying glass shows a complexity of design that has its own immensity.”

Lavin is perhaps parrying with the culminating snowfall of Joyce’s The Dead here – a common enough pastime for her generation of short-story writers working in the afterglow of modernism. Yet she did not find the stuff of fiction in the plush melancholia of that lonely romantic man at the window, as did her peers Frank O’Connor and Seán O’Faoláin. Lavin, like her protagonists, experimented with how to make much out of little. Her stories press elegance and austerity, happiness and loss against one another in tales of widows surviving through love’s aftermath, daughters made diamond-hard by the pressure of parochial expectations, and men enfeebled by the cruel optimism of postrevolutionary Ireland’s promise. Moving from the sublime to the crystalline requires a deceptive emotional temperature: her descriptions will feel warm, because the characters are so closely held, until you realise with a shiver that the room must be kept below freezing for that snowflake to stay solid.

Elke D’hoker’s edited volume Mary Lavin presents a dozen new examinations of Lavin’s intricate designs, offering a prismatic reconsideration of her entire body of work: two novels and 12 collections of short stories, from 1942’s Tales from Bective Bridge to 1985’s A Family Likeness and Other Stories. With the exception of Leah Levenson’s 1998 biography, this is the first book-length critical study of Lavin’s work in 33 years. Taken with the celebrations and republications surrounding last year’s centenary of Lavin’s birth, D’hoker’s timely, vibrant and necessary collection may signal that the first stage of Lavin’s full-scale re-emergence has at last arrived, much as Elizabeth Bowen was transformed over the past decade from an under-read Bloomsbury satellite into a central figure of midcentury modernism.

Like Bowen, Lavin practiced a studious but slightly warped naturalism that, in her case, can appear provincial in content and conservative in style before the stories yield up what Seamus Deane has called their “nefarious sweetness”. Her tales fly smoothly and then penetrate hard, giving us “the noise of delicacy and then a fierce or piercing after-effect”, as Colm Tóibín puts it in his foreword to this volume.

Virginia Woolf
Lavin wrote her first short story in longhand on the back of her dissertation on Virginia Woolf; the fantasy pioneer Lord Dunsany was an early advocate of her work. The critics assembled here show how she is, by turns, an inheritor of Woolf’s diaphanous form and of Dunsany’s later Gothic mysteries.

From her first book, writes Anne Fogarty, Lavin “announces herself as an Irish feminist intermodernist whose multifaceted work is distinctive, exacting and driven by an unrelenting ferocity”. Though she has been accused of swerving away from Irish history, her “ferocity” is, in truth, a microhistorical, densely interiorised vision of how both aesthetics and conduct may be shaped by fear as much as by love. In a letter quoted in Theresa Wray’s essay, Lavin writes that, “in Ireland, there is a constant effort to resist the advances of beauty in any form, whether it is a new pattern on a tea-cup . . . or a minute difference of shading in a coat of yellow paint . . . I believe that it dates back to a time when people in Ireland actually were afraid to show any sign of prosperity, even by a new tea-cup, or a new coat of paint, in case their taxes would have been raised by absentee landlords.”

Lavin builds a community on the page and then shows us “glimpses of sentiment that if given full vent might destroy the fabric of social interaction”, according to Derek Hand.

She did, however, relent for her editors sometimes. Gráinne Hurley’s fascinating essay chronicles Lavin’s relationship with the New Yorker through a novel investigation of the magazine’s archives. In a 1957 letter of introduction that Hurley has uncovered, JD Salinger advertises the New Yorker to Lavin as “the only sane magazine to deal with in this country” and implores her to submit her work: “Frank O’Connor and Maive [sic] Brennan do good things for the magazine,” but “Nobody Irish has done any intimate, reflective pieces for them. Some things out of England, but nothing really Irish.”

She agreed, and the first story after the long silence following her husband’s premature death appeared in its pages. For the next 18 years Lavin’s “first-read” contract with the New Yorker provided her with the motivating assurance of attentive editors and, not least, a semi-regular paycheck for the young widow and her three daughters.

Hurley’s record of minor compromises across a transatlantic gulf gives us new ways of gauging Lavin’s sense of her times, seasonal as much as political. In a Café, due to appear in December, had one detail pruned to suit the magazine’s insistence that all fiction be season-specific: “about the birds in their secret nests making faint avowals of the last of the day,” wrote her editor, “That would not be appropriate here for winter weather.” Lavin regretted the loss of her allusion to Yeats’s Lake Isle of Innisfree, with its “evening full of the linnet’s wings,” but she acquiesced for the sake of her readers.

On the path to recuperating Lavin’s critical esteem, some critics here overstate the progressivism of her politics or her formal innovation in the short-story sequence. Heather Ingman, in a sharp reading of Lavin’s play with forms of Irish masculinity, suggests that Lavin’s work “leaps over the feminist protests of the 1970s and 1980s to a postmodernist recognition of the fluidity of gender roles”. True, though Lavin likely read Orlando before she intuited her way to Judith Butler, and Ingman’s formula elides Lavin’s conservatism in these later decades of her career. Hurley cites another letter in which Lavin suggests advancing her 1969 story The Lost Child, a drama about a miscarriage, because it had become “topical now – with the birth control issues” (the pill having only just been legalised in the United States). It is difficult to gauge Lavin’s tone when she speaks of the “topical”.

“Lavin once told me that she read criticism as though it were detective fiction,” Julia Anne Stevens reports, in a twisty paper that turns an exegesis of one of Lavin’s more overlooked stories into a tale of murder and intrigue. The best essays here pick up Lavin’s magnifying glass and continue her investigations.