The Irish Garden by Jane Powers review: a feast for the eyes

This remarkable volume, full of stories and atmospheric photographs, shows that Ireland has hidden its horticultural light under a bushel for far too long 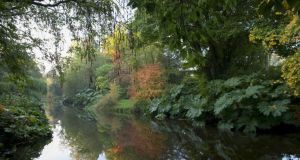 Author:
By Jane Powers with photographs by Jonathan Hession

Follies, fancies, fields of dreams, rambles through the rare and spectacular, visits to the gardens of passionate plantspeople as well as those “carefully re-awoken from the slumbers of dereliction” – The Irish Garden, by Jane Powers, with wonderfully atmospheric photography by her husband, Jonathan Hession, takes a loving, thoughtful and penetrative look at almost 60 of Ireland’s greatest gardens open to the public.

I’ve heard it said that this remarkable book was several years in the making, but I’d argue that it was several decades in the making, its craftsmanship the result of Powers’s long and distinguished career as a garden writer, including, for many years, for The Irish Times. She is known for her abiding love of nature, her incisive, forensic attention to detail, and her joy in the beauty of the written word,

Writers sometimes talk of their books as a labour of love, and so it is with The Irish Garden. Tipping the scales at almost half a stone, it is a weighty book, literally and figuratively, and one that provides valuable illumination on the question of what exactly it is that makes a garden recognisably Irish.

Some, such as Bantry House in Co Cork, Mount Stewart in Co Down and Powerscourt and Kilruddery in Co Wicklow, are, as Powers puts it, “the grandest of the grand”, their creation the result of the wealthy, ruling Anglo-Irish class of yesteryear. Others, such as Caher Bridge in Co Clare, Hunting Brook in Co Wicklow, Dunmore Country School in Co Laois, the Bay Garden in Co Wexford, Helen Dillon’s Dublin town garden and June Blake’s Wicklow garden, are much younger, the seeds of their creation rooted firmly in the Ireland of the late 20th and early 21st centuries.

Between them, the stories of these and the many other Irish gardens covered span more than 300 years. That’s more than three long centuries of brilliant, innovative, idiosyncratic, eccentric garden-making by a host of horticulturists, plant-hunters, landscape architects, botanists and garden lovers, some Irish, some not.

Not only is The Irish Garden a delightful, informative, illuminating read and a feast for the eyes, but it proves that for far too long this country has hidden its horticultural light under a metaphorical bushel by undervaluing, sometimes even shunning, its own rich gardening traditions. And so The Irish Garden also marks a nation’s coming of age, showing exactly why it is that we should take such an immense, enduring and protective pride in the remarkable gardens that are a unique but fragile part of our heritage.

Fionnuala Fallon writes about gardening each Saturday in the Magazine