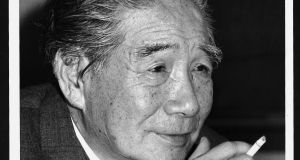 The Honjin Murders, the classic Japanese detective novel by Seishi Yokomizo, is the perfect read for this time of year. Short and compelling, it will appeal to fans of Agatha Christie looking for a new case to break – and perhaps offer an alternative, or act as an appetiser, to the TV adaptations of detective stories that are fast becoming a modern Christmas tradition in their own right.

Heralded as Japan’s greatest murder mystery, the book was published in 1948 and now appears in English for the first time in a deft translation by Louise Heal Kawai that ably renders the tongue-in-cheek tone of Yokomizo’s mystery. With two gory murders at its centre, the book has a number of police detectives and also a Columbo-like PI (the real brains behind the operation) investigating the case. The narrative is clever and self-knowing, often referencing other classic murder novels from the likes of Christie and Arthur Conan Doyle.

The techniques employed by these writers is a central focus. In The Honjin Murders, the double murder of newly married couple Kenzo and Katsuko is of the “locked room” variety, a concept that is given new life by the narrator’s interest in the form. We learn – without Yokomizo giving anything away – of the many novels who use this type of mystery and why only some succeed.

With the breezy, wry voice of the narrator to guide us, we are invited into the tragedy from the outset – “If you are the kind of reader who enjoys reading between the lines of a story, and recall the particulars of the crime, you may already be able to guess what I am about to write next” – and, like any good murder mystery, are given the requisite amount of information to solve the crime ourselves.

And so to the plot. In the winter of 1937, the village of Okamura in rural Japan prepares for the forthcoming wedding of Kenzo, the eldest son of the grand Ichiyanagi family. Dampening festivities somewhat is the arrival in town of a sinister masked man with an even more sinister three-fingered hand. On the night of the wedding, the groom and his bride retire to a locked annexe on the Ichiyanagi demesne. Later the family is woken by a scream to find that the newlyweds have been stabbed to death. Clues abound: the eerie music of the koto, a bloody samurai sword left in the snow outside the annexe, the lack of footprints in said snow (fans of Sherlock Holmes will already be on alert.)

As befitting someone who writes detective stories, Yokomizo is clear and meticulous in his writing: a detailed description of the annexe and the surrounding landscape is given, right down to the pine trees, “neatly pruned, their heavy lower branches supported here and there by crutches made of pieces of young bamboo”.

What follows is the dismantling, by amateur sleuth Kosuke Kindaichi, of a rich family dynasty whose chequered history is in part responsible for the deaths. The backdrop of pre and post war Japan elevates this book from being just another murder mystery. Particularly of interest are the hierarchies within society and within the family unit. In the Edo period of Japanese history, their residence was a honjin, or an inn for the nobility. When the structures began to change in the 19th century, the Ichiyanagi family were quick to capitalise by buying up land in the vicinity to give themselves elevated status. Though they see themselves as being above their contemporaries – including Kenzo’s bride Katsuko – many within the village consider them “a bunch of upstart kappa, mythical water goblins”.

Elsewhere, Yokomizo deviates from the story to discuss the ranking system so integral to Japan’s culture and how this has been affected by the war: “Gentle reader, the word “lineage”, which has all but fallen out of usage in the city, is even today alive and well in rural villages like this one. You might even say it rules every aspect of people’s lives. We are now in a period of upheaval following the Second World War, and farmers and peasants are increasingly no longer obliged to kowtow to the upper classes, or to show the same level of respect for those with high social standing, fortune or property. Those values have come crashing down in the wake of Japan’s defeat.” Like all the best murder mysteries, we learn about the wider society and how the individual’s role in that society can cause untold and lasting damage.

If the red herrings and clues pile up in later sections of the book to lead to a kind of frenzied end, we can forgive this for the knowledge imparted to us along the way: “The true horror of this case isn’t in the way it was done, but why it was done, and in order to understand that, it’s necessary first to understand the man.”