The Hidden Life of Trees by Peter Wohlleben review: Alive to their roots 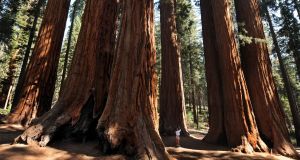 Is there a distinction to be made between living and being alive? Certainly the language suggests there is. To be “merely” living is to be passive, and gradual to the point of inanition – as TS Eliot has it in The Four Quartets, “that which is only living / Can only die” – whereas to be alive is to be swiftly kinetic, primed with awareness, as when we say we “are alive to” this or that situation or phenomenon. Human beings are alive, so are animals, and so even, at one time, were the gods. We believe that our state, our “being alive”, is in contradistinction to that of so-called inanimate objects, such as rocks, rivers – and trees.

Peter Wohlleben, in his disarmingly candid and unemphatic fashion, begs to differ. He is a forester and environmentalist, who has the care of a forest of venerable beeches in the Rhineland municipality of Hümmel in central Germany, so he knows whereof he speaks. While he does not say so in so many words, he lets us know, in this marvellous book – literally, it is a book of marvels – that in his opinion, and in the opinion of an increasing number of specialists, trees are sentient: they are communal, they care for their young and for their neighbours; they remember, they can learn and they can count; they may even have emotions and feel pain.

Some might dismiss Wohlleben as a sentimentalist and a “tree-hugger”, but this would be a grave misapprehension; part of the pleasure of his book is his – literally, again – down-to-earth tone, and drily humorous prose style. Yet in his quiet way he is startlingly radical. He quotes with approval the constitution of Switzerland, which stipulates that citizens must take account “of the dignity of creation when handling animals, plants and other organisms”, and declares that, while others may disapprove of this blurring of the distinction between creatures that are alive and objects that are merely living, “I, for one, welcome breaking down the moral barriers between animals and plants”.

Among the reasons for our failure to comprehend what remarkable things trees are, aside from our deplorable anthropocentrism – “God made the world for man’s use and benefit”, the Catechism breezily assures us – is the fact that on average they live their lives about 10 times more slowly than we do, and that they survive for so long. Wohlleben tells of examining a “young” beech in the forest he manages, which had a trunk about a third of an inch in diameter, but which he discovered to be at least 80 years old. Then there is the single small spruce in the Dalarna province of Sweden which researchers found to have been living for what Wohlleben describes as an “absolutely unbelievable” 9,550 years.

The author in his Introduction confesses that when he began his career as a forester he “knew about as much about the hidden life of trees as a butcher knows about the emotional life of animals”. Like so many others of his kind in those days, he considered it was necessary to protect the wellbeing of the forest purely for industrial and financial reasons. However, as he grew to know the forest more intimately, he began to understand the complexity of tree life and to follow its immensely subtle ramifications. He also tells us, with a refreshing absence of snobbism, how much he learned from the tourists who came to his forest. “Visitors were enchanted by crooked, gnarled trees I would previously have dismissed because of their low commercial value. Walking with my visitors, I learned to pay attention to more than just the quality of the trees’ trunks.”

He also benefited from the increase in tree research, especially when Aachen University set up investigative programmes in the forest he manages: “When you know that trees experience pain and have memories and that tree parents live together with their children, then you can no longer just chop them down and disrupt their lives with large machines.” He also came to know of the “wood wide web”, news of the discovery of which was published in the scientific journal Nature in 1997.

In a “Note from a Forest Scientist” appended to Wohlleben’s book, Dr Suzanne Simard, a professor of forest ecology, describes how in the 1990s she and her colleagues at the University of British Columbia in Vancouver unearthed the fact that there is a vast, secret connection between trees by way of fungi that link up individual root systems. Puzzled as to why, in the patch of forest where she was working, the clearing of birches resulted in the decline of nearby Douglas firs, she found that the birches, “like carers in human social networks”, were encouraging the growth of the firs by supplying them with some of their own photosynthetic carbon-tree food. It appears, says Wohlleben, that such “nutrient exchange” to help neighbours in need is the forest rule.

Fungi are probably the tree’s best friend. For example, when a pine is suffering from a lack of nitrogen, its partner, the splendidly named fungus Laccaria bicolor, or bicoloured deceiver, will release a poison into the soil around the tree’s roots to kill off tiny organisms which, in dying, release the nitrogen contained in their bodies. Fungi, says Wohlleben, are “amazing”. Amazing they are, and prolific: a fungus in Oregon is estimated to be 2,400 years old, extends over 2,000 acres and weighs 660 tons.

Over the course of his deceptively simple-sounding narrative – translated, it seems, although the publisher chooses not to acknowledge the fact, by Jane Billinghurst – Wohlleben subtly leads us to follow him to his conclusions about the intelligence, resourcefulness and generosity of trees. Again and again he returns to the question of how it is that they can learn, and store what they have learned, since supposedly they do not have what could be called a brain. His guess is that the root system acts as a cognitive organ, and surely he is right. So next time you walk into a forest, keep in mind that you are not alone. And while you’re at it, as Wohlleben recommends, “take a closer look at what you might have taken for granted. Slow down, breathe deep, and look around”. In other words, be alive to the living things that stand about you on all sides.