The Gene: An Intimate History review – journeys in a misunderstood world 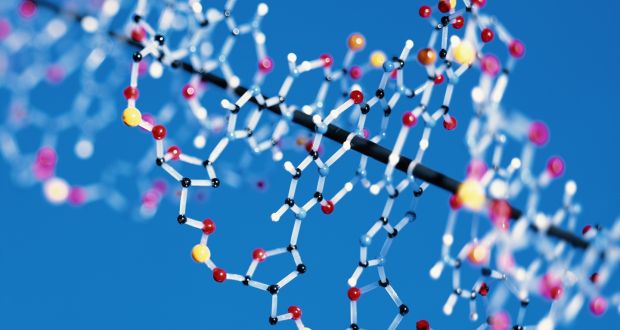 When The Irish Times says, as it did last month, that “innovation is in our DNA”, as a geneticist I might be pleased. The problem, of course, is that most readers do not know what the term means. Well, DNA is the chemical genes are made of. If something is in your DNA, this means it’s in your genes. But what does that mean?

Siddhartha Mukherjee, a molecular biologist at Columbia University who received a Pulitzer Prize in 2011 and whose family has been affected by heritable illness, is well-placed to explain this complex topic. He writes well, often pithily, in his mostly excellent, though occasionally protracted, history of the gene.

The first century of genetics was of little interest to the general public, as I found out at dinner parties in the 1960s. The past 50 years have seen genetics emerge, in the words of Bryan Appleyard, as “the most restless, turbulent and demanding form of knowledge that our species has yet produced”.

Mukherjee sees the gene as “one of the most powerful and dangerous ideas in the history of science”, and he ranks it with the atom as an idea that has transformed our understanding of the natural world. The gene is the beautiful and powerful idea that explains biology. Friends are more interested now but still find it difficult to accept the implications of genes, which affect everything we are and do, but often in a small way that cannot be understood or altered.

Moreover, ethical dilemmas prevent people from paying attention to areas where genetics can be of great service. Mukherjee has the optimism – or is it bad judgment coming from relative inexperience? – to believe that genetics can do much more, although he warns us that the field has been abused.

By 1966 we knew how DNA carried out all the functions of genes: information storage and transmission, replication, mutation and evolution. Ronald Fisher, in The Genetical Theory of Natural Selection (1930), and others had explained Darwin’s theory of evolution. All of this was wonderful science, and Mukherjee tells this part of the story with zest. He does, however, make the kind of mistakes the general reader will not notice. Most do not matter, but it must be clarified that Darwin was not a clergyman, much less a “landed cleric”.

Darwin, a natural sceptic, had no time for religion. He knew that evolution must entail the inheritance of useful attributes, but his theory of heredity was quickly shown to be misplaced.

He had received Gregor Mendel’s paper on heredity, but there is no evidence he had read it. Though most of the great discoveries of genetics in the early period are described, Mukherjee ignores the wonderful contribution of genetics, from 1920 onwards, to plant breeding, which increased food and feed productivity by 1 per cent a year, and underpinned the green revolution for which the geneticist Norman Borlaug received the Nobel Peace Prize in 1970.

Simplifying complex ideas is not easy; there is, however, no excuse for not drawing a simple model of a basic gene or showing us the crucial connection between genes and proteins.

A model would show a piece of DNA looking like a ladder of about 1,000 steps, made of four different kinds (called AT, TA, CG and GC). The sequence of these units is the genetic information, whose job it is to specify the structure of a protein (such as insulin). There is one gene for each protein made in your body.

Genes must replicate. DNA has two strands and replicates by a mechanism that is easy to illustrate. This was suggested by James Watson and Francis Crick in 1953. Watson, by the way, was not “trained as an ornithologist at the University of Chicago”. Mukherjee says he does not like diagrams – his editor should have insisted otherwise.

Mukherjee summarises Nazi and Soviet genetics nicely: “The Nazis were as obsessed with the fixity of identity as the Soviets were with its complete pliability.” Neither regime contributed anything to genetics, merely showing that totalitarian regimes are horrible and “produce junk science”, the extreme case of the dictum that governments should not tell the best scientists what to work on.

This section will not help the reader to understand genetics and could have been replaced with a considered treatment of plant genetics. Or he might have told the great story of human evolution. Or indeed a more thorough treatment of genetic diagnosis and genetic counselling, which are woefully underdeveloped in Ireland.

Since 1973 US citizens have had the legal right to prenatal diagnosis for foetal genetic disorders. That and carrier diagnosis have reduced the frequency of cystic fibrosis by 30-40 per cent. Michael Conneally, the geneticist from Ballygar, Co Roscommon, receives an honourable mention for his brilliant work in Indiana on the identification of the gene that causes Huntington’s Chorea, a condition that can be avoided through genetics.

Genetics burst on to the world stage from 1970 with the development of genetic engineering, a set of methods for purifying chemical quantities of individual genes, chemically synthesising genes, and moving genes from one organism to another.

In the late 1970s human insulin genes were transferred to yeast so that the yeast could produce limitless amounts of human insulin. By 1982 this genetically modified insulin replaced pig insulin in the treatment of diabetes.

In the 1990s GM plants began to dominate the production of soya, cotton, rapeseed and corn. The key discovery by Hamilton Smith, in 1970, of a kind of enzyme that cuts DNA into gene-sized pieces coincided with my return to Trinity. Within 18 months Peter Humphries had begun to use these enzymes to analyse DNA in my laboratory. So I was irritated to learn from Mukherjee that these enzymes are found in viruses – news to me. Mukherjee otherwise describes the birth of the new technology quite well, although it is a pity he does not credit Smith with the key discovery.

In general the regulation of GM technology has been an expensive and pointless exercise in anti-science. I am happy to say I have been right so far: GM technology (biotechnology) has revolutionised medicine, agriculture and forensic science, without causing any harm in four decades. We can’t say that for the internal combustion engine or electricity. I should say that Science Foundation Ireland today would not fund the kind of research that led to the biotechnology revolution.

All in all the book is a fine read, with many fine stories. It describes some bad science and some horrible behaviour, such as eugenics, but the field has more than compensated for its abuses by the achievements that have earned more than 40 Nobel prizes. Mendel had a great idea in 1866 that gave us a new way to think about ourselves and our world, a symphony (or a cacophony) of genes, culture and environment.