The Flatshare review: A bright, feel-good and quirky debut

Beth O’Leary tells the story of Tiffy and Leon – who share a bed, but have never met 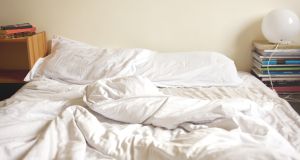 Tiffy and Leon share the same one-bedroom London flat. They even share the same bed – but they have never met. She works as an editorial assistant in a small publishing house and needs to escape an abusive relationship; he’s a night nurse at a hospice and is trying to raise funds for an appeal to get his little brother out of prison.

Leon puts an advert on the internet and Tiffy answers it. Their friends are wary about the arrangement, but to Tiffy and Leon it’s the perfect solution: he will occupy the flat while she is at work during the day, and she will have the flat to herself while he works night shifts. Their lives and routines are as disparate as their personalities: Tiffy is a chaotic, impulsive, talkative girl who “panic bakes” when things get tough. Leon is shy, twitchy, awkward, introverted. It’s the perfect pairing for a romantic comedy.

The inspiration for Beth O’Leary’s quirky and clever debut novel came from living with her doctor boyfriend while he worked nights. They never saw each other during this phase of their relationship, yet Beth could tell how her boyfriend was feeling from little clues he left around their apartment, and it made her wonder what it would be like to live with someone you have never met.

Tiffy and Leon begin to communicate by leaving Post-it notes around the flat for each other – hers chatty and lengthy, signed off with kisses; his initially short and stilted. Through these notes, they begin to get to know each other and learn to decipher the other’s moods. Tiffy bakes flapjacks; Leon leaves a Post-it note of gratitude and some leftover mushroom stroganoff for her in the fridge. Gradually they become not just flatmates but pen pals and an emotional support to one another. Each chapter is told from the perspective of one or other of them and the reader is immediately invested in Tiffy and Leon as characters – they are both likeable and their correspondence is touching, charming and genuinely romantic at times.

Inevitably, the pair do meet. In one of the funniest scenes in the novel, they encounter each other while both in compromising situations. Though initially embarrassed and panicky, they soon realise that the friendship that began on paper has the potential to develop into something more.

O’Leary has created a strong and original scenario for the coming together of these two characters, as well as interesting supporting characters and subplots: an author who writes books about knitting and crochet and is “just on the acceptable side of eccentric”; a dying man who wants to be reunited with his lover from the second World War; a brutally honest barrister best friend; a precocious child with cancer; and a creepy and controlling ex-boyfriend all too have histories that are skilfully woven around the main characters’ lives.

The structure and tone of this novel and the burgeoning relationship of Tiffy and Leon has echoes of Emma and Dexter in David Nicholl’s One Day. Its office descriptions are sometimes reminiscent of Helen Fielding’s Bridget Jones’s Diary, but while The Flatshare is moving at times, it lacks the poignancy of the former and, though it is full of Fielding-type quirky humour, it never made me laugh aloud.

Tiffy and Leon’s voices, indeed their personalities, seem to become more similar as the story progresses; initially this felt like a flaw, but perhaps this is also true of real-life relationships – the more time you spend with someone else the more alike the two of you become.

There are several slightly clunky plot developments – in particular, an entirely unrealistic letter from Leon’s imprisoned brother explaining to Tiffy (a woman he has never met) why he was wrongfully convicted. The use of Americanisms grated on me – awesome, super-awkward, reaching out – and the ending is a little bit too happy and Hollywoodish for this somewhat-jaded reader, but this is a story that zips along and never loses momentum. It’s bright, feel-good and charming, full of happy coincidences that rarely occur in real life but are all the more satisfying for this reason. Like a packet of Hunky Dorys for a hangover or a hot bubble bath after a walk in the rain, reading The Flatshare is a pleasurable, if fleeting, experience.