Columbanus was the first to express an Irish sense of identity in writing and to introduce us to the concept of a united Europe, inspiring Robert Schuman, architect of the EU 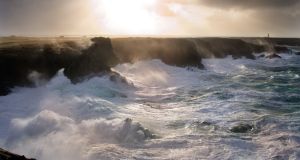 In evocative verse, the poet describes the sun setting off the west coast of Ireland as waves break and crash against cliffs

In 2009 I sent Seamus Heaney a poem for his 70th birthday. I got his address from a friend of my father’s in Co Antrim who knew Heaney well. The poem was my translation of the earliest poem about Ireland, written by an Irish émigré monk in Hiberno-Latin in the seventh century, and little known but to a few scholars.

In evocative verse, the poet describes the sun setting off the west coast of Ireland as waves break and crash against cliffs preventing a currach from venturing out in the swell. Although couched in the natural wonder of direct experience, the poem is really about decline and renewal, light and darkness, transcendent reality: it is a poem of hope. As a historian, I wanted to honour a great poet who made “hope and history rhyme”.

The poem is embedded in a greater narrative: an adventure story and odyssey that recounts the travels of the Leinster monk Columbanus who weaved his way 2,000 miles through Western Europe at the turn of the seventh century founding monasteries, berating bishops and kings, and corresponding with popes. An Italian monk named Jonas of Bobbio wrote a biography of the Irish saint some 20 years after Columbanus’ death in northern Italy – one of the major sources for this period in European history.

As the bad boy of early medieval monasticism, Columbanus is appropriately now the patron saint of motorbikers (although I doubt many bikers either know or care about this fact). He was also the first Irish person to express an Irish sense of identity in writing (S Patrick was Romano-British) and the first to introduce us to the concept of a united Europe. He was a forceful advocate for unity and tolerance in the divisive and violent world of his day. As an immigrant in the heart of Europe, he pleaded for toleration and accommodation. His example had a surprising influence on Robert Schuman, the postwar French foreign minister and architect of the modern European Union.

Schuman was responsible for organising an academic congress five years after the end of the second World War in Luxeuil-les-Bains in eastern France to commemorate the 14th centenary of Columbanus’s birth. Leading European statesmen and diplomats that included Minister for Foreign Affairs Seán MacBride and Taoiseach John A Costello together with high-ranking Church officials (among them Monsignor Roncalli, future Pope Saint John XXIII who would convene the Second Vatican Council) converged on Luxeuil in response to Schuman’s invitation.

Only two months prior to the Luxeuil conference on May 9th, 1950, Schuman had made the historic declaration in Paris that would mark the foundation of the European Community: the Schuman Doctrine. The previous summer in Strasbourg he had declared: “We are carrying out a great experiment, the fulfillment of the same recurrent dream that for ten centuries has revisited the peoples of Europe: creating between them an organisation putting an end to war and guaranteeing an eternal peace … Our century, that has witnessed the catastrophes resulting in the unending clash of nationalities and nationalisms, must attempt and succeed in reconciling nations in a supranational association. This would safeguard the diversities and aspirations of each nation while coordinating them in the same manner as the regions are coordinated within the unity of the nation.”

Behind the antiquarian academic discussions at Luxeuil, Schuman had a very pragmatic reason for bringing together leading European statesmen – he wanted to sound out the idea of a European coal and steel community based on the premise that by pooling coal and steel production (the most important materials for the arms industry) and by merging economic interests future war in Europe could be prevented. In his vision for a united Europe, Schuman drew inspiration from the unlikely figure of Columbanus who he praised as “the patron saint of all those who seek to construct a united Europe”. While it would not be until April 1951 that the European Coal and Steel Community (ECSC), the forerunner of the modern European Union, was launched, the conference in Luxeuil gave a new lease of life to a long-dead Irish saint.

Sixty-five years later, when Schuman’s grand vision for a united Europe looks more and more unstable and threatened, the story of Columbanus’s travels through Western Europe and his clarion call to unity in diversity continues to inspire new expressions of solidarity in a time of crisis. Inspired by the success of the Camino de Santiago in northern Spain, local communities in Ireland, England, France, Austria, Switzerland and Italy are now planning a new cultural pilgrimage route from northern Ireland to northern Italy following Columbanus’s footsteps into the heart of the new Europe (The Columban Way). Based on the itinerary and adventures detailed in Jonas of Bobbio’s account 1,400 years ago, this trail will be a symbolic vein and artery of memory that reminds us of our deep ties and common heritage with our European neighbours.

Like the lyric beauty and truth expressed in Heaney’s poetry, which often drew on the ancient past for inspiration, those who walk the trail can find hope in the earliest poem about Ireland which ends on a positive note: with the sun setting off the west coast and its rising again in the East “rendering the world, wet with dew, pleasant again”.

With his customary grace and courtesy, Heaney replied to my letter, thanking me for the “wonderful defamiliarizing, refamiliarizing work”, praising the translation “because the remoteness of the idiom and the elsewhereness of the island come through – without any sense of archaizing”, and wishing me well with the bigger task of translating Jonas’s Life of Columbanus.

Heaney’s sudden death only four years later came as a shock: he poignantly chose the medium of Latin as his final words – Noli timere (“Do not be afraid”). I had been looking forward to sending him the completed work, but was glad at least that he had liked the poem.

The island of Ireland [is] situated at the far end of Ocean,
And there awaits the setting of Titan [the Sun], while the world is turning,
And light descends into the sea in the western shadows.
There the huge mountains of waves, wild in colour,
With profuse snaking locks, beat everywhere on the caves,
And there, in a cloak that its blue backs suddenly reveal,
They strike the white foamy seashore, the final curve of the land,
And do not allow the coast that we know well
To release a small questing boat to the salt-swell.
Above these, yellow-haired Titan descends
And, with dimmed light wheeling, heads for the regions of Arcturus.
Following the North Wind, he seeks his rising-place in the East,
So that, revived, he may give back a pleasant light to the world,
And, with fire, show himself far and wide to the shivering world.
Thus, having passed through all the turning-points of day and night
With completed course,
He illuminates the lands filled with his brilliance,
With his heat rendering the world, wet with dew, pleasant again.

This is a literal translation from Hiberno-Latin of the poem found in Jonas of Bobbio’s Vita Columbani I.2. From Jonas of Bobbio: Life of Columbanus, Life of John of Réomé, and Life of Vedast, translated with introduction and commentary by Alexander O’Hara and Ian Wood, Liverpool University Press, 2017. Reproduced with permission from the editors and publisher.
Dr Alexander O’Hara is an Honorary Fellow of the School of History, University of St Andrews and the editor of Columbanus and the Peoples of Post-Roman Europe, forthcoming from Oxford University Press. There will be a book launch for the volume at Charlie Byrne’s Bookshop in Galway on Thursday, April 20th at 6.30pm.