The Evenings review: A masterwork of comic pathos 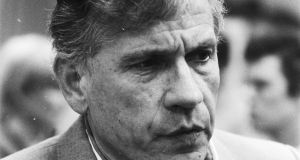 Gerard Reve: His book, which was published in 1947, is considered by the Society of Dutch Literature to be the best Dutch novel of all time

Baldness has begun preoccupying young Frits van Egters, not his though, only the impending hair loss of others. He cultivates the role of prophet of doom, assessing bare patches on the heads of those around him and often expresses his views in a formal rhetoric and delights in including some science. The torpid days between Christmas and New Year crawl by as he counts the relentless minutes between eating, sleeping, visiting his friends and executing outings to the cinema and elsewhere.

Frits is restless; given to complex and disturbing dreams as well as ongoing melancholia. Then there is the matter of observing his aging parents. His father is becoming deafer by the day and his cheerfully fussy mother refuses to serve black coffee, does the cooking, monitors the coal and does her best in generating small talk, usually about food. Joop, the older son, is married. He too, in common with many of the men in this poised, brilliantly well sustained masterwork of comic pathos, appears to be losing his hair.

It is not surprising that Reve’s debut, which was published in 1947, is considered by the Society of Dutch Literature to be the best Dutch novel of all time. It should also be acknowledged as one of the finest studies of youthful malaise ever written. Frits is an Everyman, or more accurately, every person, caught up in an ongoing personal drama of wondering what exactly his life is about.

It comes as a small shock to discover that this is the first English translation. The distinguished American translator Sam Garrett, who has lived in Amsterdam for more than 30 years, has conveyed each sigh and sly aside with majestic tonal panache and the outcome should cause many readers to revise their opinions of The Catcher in the Rye (1951). In all fairness to Salinger, The Evenings is so much better and while it is immensely more sophisticated, it also expresses that bewildering sense of being very young, if already decidedly weary of grown ups who appear so stupidly unaware of life’s true menace. If Holden Caulfield is a bit of a pain, Frits van Egters, with his vile if hilarious jokes, astute observations and offbeat humour, is slightly terrifying but more real and far better company.

Unlike Meursault in The Outsider, which established Albert Camus as a seer, Frits is not an isolated figure. He lives with his parents and although 23 and working as a clerk in a lowly job which he describes as a tedious ritual involving moving files around, remains very much a boy. As he counts his father’s sighs and other annoying habits, a running commentary plays in his mind – it concerns the tension between what Frits says and how he really feels. There is also a soundtrack provided by the radio with its endless variety of music programmes which emerges as a clever narrative device, as does a borrowed toy rabbit.

Meals are prepared and eaten, the washing up helps to deal with some of the time if not enough. His mother sits down, “knitting something in white wool” and the sound makes him think of “needles ticking like a fast clock”. Frits must take action; he dons his coat and heads out into the cold streets with only one mission on his mind – to get through the hours between his next, big nocturnal adventure which arrives fast and furious in the form of vivid nightmares.

In Frits, Reve, who was born in 1923 and enjoyed a colourful, if provocative literary career, has with this random if very deliberate narrative expressed the dilemma of a post-war generation, too young to have served, yet sufficiently old to be aware of what has happened. There are passing allusions throughout of a society dealing with rationing and beginning to relax. Austerity remains part of daily life, only no one discusses the past. Frits is caustic; aware he is expected to shock his buddies and makes nasty jokes about parents killing their children, albeit by accident.

Yet he puts some effort into buying a present for a friend’s child. He also has deep thoughts. The sound of a train in the distance causes him to reflect: “And so our hours pass.” Elsewhere when pondering his desire for sleep during the day, “I should get up. . . and fetch a blanket from the cupboard. But I cannot force myself to sit up straight. . .” He hears children playing and it makes him recall: “When I was seven, I cut grass on the lawn with a normal pair of scissors and saved it in a paper cornet. I’m laying here like a sick man.” He falls asleep. Cue for another dream in which he weeps. On waking his pillow is wet.

For a narrative so funny, it is also profoundly moving. Frits is obviously suffering and exists in a state of muted panic. On the morning following a cinematically detailed binge drinking session with his friends – his parents having subsequently helped him get to bed – Frits wakes and on peering into the shaving mirror, mumbles, “The body is gravely damaged.” After another evening spent visiting a friend, he returns home and collapses on his mattress, but remembers he hasn’t cleaned his teeth. “He tried to sit up a few times, but was unable to rise. “I’ll count to 20,” he thought. At 24 he hopped to his feet and went into the kitchen. After brushing his teeth, he dropped his underpants and, holding the shaving mirror between his legs, examined his crotch. . . ”Very distasteful,” he mumbled. “If you saw a photograph of it, taken from below, you would hardly believe it was human.”

Little happens, yet a great deal does. It is a people-watching novel, rich in character and bantering dialogue. For Frits the end of the year is also about the end of life, or rather some lives, of those close to him. “Everything is finished,” he whispered, “it is passed. The year is no more. Rabbit, I am alive. . . Whatever ordeals are yet to come, I am alive.” Although it has taken close on 70 years to reach an English-speaking readership, The Evenings, as a novel possessing a wide appeal, deserves to begin making up for lost time very quickly - and will.

Eileen Battersby is Literary Correspondent. Her debut novel, Teethmarks on my Tongue (Dalkey Archive), is out now