The End of Eddy review: Life in a northern homophobic town 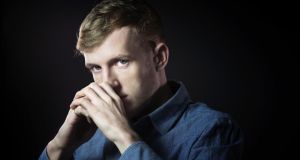 Édouard Louis: The End of Eddy is his story, a “deeply political account of the poverty and violence as well as the homophobic and racial tensions that exist in contemporary France”. Photograph: Joel Saget/AFP/Getty Images

Book Title:
The End of Eddy

Eddy is different. For him there is no peace, no real safety. His father mocks his weakness. At school he is constantly under attack. “From my childhood I have no happy memories. I don’t mean to say that I never, in all those years, felt any happiness or joy. But suffering is all-consuming.”

The opening scene of The End of Eddy sets the mood for much of what is to follow. He recalls the moment two boys appeared in the hallway. First he describes them, then he reports their actions. One of them spits in his face, and both laugh at him as the gob of mucus slides down his face, “from my eye towards my lips, ready to enter my mouth”. Eddy knows that it would be too dangerous to wipe it off – if might provoke his attackers.

The scene recalls similar ones in Jean Genet’s The Miracle of the Rose (1946) and Romanian Mikhail Sebastian’s 1934 classic For Two Thousand Years, in which protagonists are viciously humiliated for being different: gay or Jewish. The End of Eddy is graphic and unsparing, at times almost impossible to believe, except that its brutality is all too real.

The narrator is repeatedly insulted for his effeminate ways. For his father, the boy is an affront to his aggressive cave-man masculinity, while his schoolmates regard him as a joke, a human football to kick. Most terrifying of all is that Eddy not only accepts his torment, he is complicit, almost dependent on it as a form of personal affirmation.

Initially, the humourless narrative is difficult to read; the author, Édouard Louis, spares no detail.

“As far back as I can remember I can see my drunk father fighting with other drunk men leaving the café, breaking noses and teeth,” and challenging any man who dared look at his wife, Eddy’s mother. Then there is the graphic description of his father regularly placing newborn kittens “into a plastic supermarket bag” and swinging it against some cement edge “until the bag was filled with blood and the meowing had ceased”.

His father would also drink “the still-warm blood” of the pigs he had just butchered, bragging “it’s the best, the blood you get from an animal right when it dies”.

Poverty, rage and ritual humiliation dominate the opening pages and much of the narrative. Ordinary life as endured in the northern French village of Hallencourt evoked by Louis may as well come from the gritty social realism of Zola. Except that this is not a historical work, but about the France of today. Louis writes about his own experiences in an intensely autobiographical novel that spares no one – neither himself nor his family, and certainly not the reader.

Born in 1992, Louis published his explosive, candidly autobiographical debut in 2014, when he was 21. It is his story, but it is also a deeply political account of the poverty and violence as well as the homophobic and racial tensions that exist in contemporary France. The casual, almost reflex abuse the narrator’s father directs towards the Arab community is shocking and apparently widespread.

Even more disturbing is the perverse cult of masculinity, which depends on targeting the weak, even if the weak happens to be a defenceless animal of a boy with a high-pitched voice and the habit of girlishly waving his hands.

Any time the narrator’s father and his drinking mates converge and address the boy, “almost without exception they ended up expressing their hatred of gay people”. The dislike, indeed fear, of homosexuality runs through the novel as a foil to the deranged masculinity.

While the events are at times stomach-churning – and reading The End of Eddy does incite equal measures of rage and pity, in addition to sympathy – the work best to compare it with is Edmund White’s beguiling classic A Boy’s Own Story, his autobiographical novel about growing up gay in 1950s America. Yet White was in his early 40s at the time he was summoning his boyhood self as a 16-year-old; for Édouard Louis, events are in the far more recent past.

In common with White, this young French writer has captured a candid, unaffected voice that resonates. It questions, yet never complains. Immense praise is due to his translator, Michael Lucey, who faithfully conveys Eddy’s intention, that of attempting to explain without quite condoning all of it, any of it.

Beyond the narrator’s personal agonies, his joy at dressing up in his sister’s clothes, which is followed by his disgust, his vain efforts at conducting a heterosexual relationship, there is the reality of living in a village in which an old man’s body is left to rot in squalor.

Eddy has none of the literary sophistication of White’s young narrator, but glimpses of his evolving furtive sensibility consolidate the novel and prove its strength. While he awaits the daily attacks dispensed by the two schoolmates, always in the same quiet hallway, he reasons: “Every day I came back, as if we had an appointment, an unspoken contact . . . There was just one idea I held to: here, no one would see us, no one would know. I had to avoid being hit elsewhere, in the playground, in front of the others.”

At home he has to contend with the ever-screaming television, a constant soundtrack to what passes as home life. The father drinks and swears; the mother smokes, lamenting the opportunities she missed by becoming pregnant at 17.

It testifies to the deceptive skill of this random yet intriguingly deliberate work that for all the stereotyping and cliched antisocial behaviour, the characters emerge as convincing and even sympathetic. Eddy’s father is a mindless thug, yet he also displays fleeting moments of paternal tenderness. Enraged by the boy’s clumsy attempt at running away, he then assures his son that he loves him.

Sexuality is a dangerous experiment, which includes Eddy being regularly sodomised at the age of 10 by his cousin. His homophobic mother happens upon one such session by chance. The boy becomes aware of her and gauges her reaction: “[S]he was already standing frozen, unable to make the slightest sound or the smallest gesture . . . Her gaze never left mine; I don’t remember what that gaze held. Disgust perhaps, or anguish – I can no longer say.” The episode ends with the narrator being beaten by his father and warned: “Don’t you ever do that again . . . ”

It is as if the novel is one long act of rape, in which the narrator, as victim, is continually being abused while the perpetrators go free of censure. Yet Eddy finds possible salvation in a love of acting. One of the most remarkable passages recalls the morning the boy is grudgingly driven by his father to the train station for an audition to drama school. “Wasting petrol for this theatre shit of yours, really why should I?” Yet he does drive him.

Our hero, the narrator Eddy, because by this stage he is a hero, does his best with heartbreaking desperation. His name causes the more privileged students to snigger, because it is only a nickname. The “end” for Eddy is really the conclusion of a vile existence, which has the chance of becoming a new life, a real one, with a new name.

Publisher’s hype all too often fails to deliver, but not this time.

Eileen Battersby is Literary Correspondent. Her debut novel is Teethmarks on My Tongue.

When I think it won’t hurt too much, I imagine the children I will not have
3