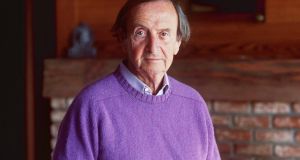 The Emperor of Ice-Cream is the most autobiographical of Brian Moore’s many fine novels. Photograph: Paul Harris/Getty Images

This is the most autobiographical of Brian Moore’s many fine novels. The protagonist, Gavin Burke, has joined the First Aid Party of the Air Raid Precautions in his native Belfast during the second World War, against his family’s wishes that he finish school – as Catholics and nationalists, they also don’t want him to have anything to do with any arm of the Northern Irish state. But Gavin is rebelling against their rhetorical nationalism; for him, “war was freedom, freedom from futures”.

In this bildungsroman, we identify with Gavin as he struggles to make sense of his life, maintaining running conversations with the White Angel sitting on his right shoulder, who advises him to do “the decent thing”, and the Black Angel on his left shoulder, who “pleaded the devil’s case”. He also struggles with his family’s strictures, his girlfriend’s rigid Catholicism – indeed, all the limitations of his surrounding society.

The ARP group he joins are a motley crew, but Moore endows each of them with distinct personalities, such as the megalomaniac leader Mr Craig and the boor Bobby. Through Freddy Hargreaves, Gavin crosses paths with many people, mostly Protestants, he wouldn’t otherwise meet. He and Freddy reject the sectarianism and traditional mores of their conservative society.

In volunteering to go into the morgue and place the bodies mutilated in the air raid into coffins, Gavin muses that “he had done the first really grown-up thing is his life”. His actions in the morgue tie in with the second stanza of the Wallace Stevens poem that gives the novel its title. The penultimate lines of each stanza (“Let be be finale of seem” and “Let the lamp affix its beam”) have to do with distinguishing between appearance and reality and seeing things more clearly. These are part of the process of maturing, which is what the novel is all about.

By the book’s end, the ubiquitous White and Black Angels have been superseded by a “new, grown-up voice”. Gavin has matured through his experiences and is ready to strike out for pastures new.