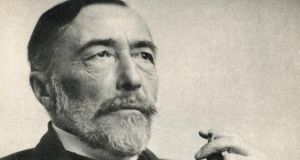 Joseph Conrad: pondering the Eurocentric, sometimes openly racist focus of his narration, Jasanoff gives Conrad the conditional pardon due to one who was both part of and ahead of his time. Photograph: Bettmann/Getty

The years have not been kind to Joseph Conrad, feted in his lifetime as the greatest writer of English-language fiction. Although he is still a historical literary titan, these days his most widely read novel, Heart of Darkness, is, tellingly, also his shortest, better known to many through its Vietnam War retread, the movie Apocalypse Now. Hailed in the West as an early shot against white colonialism, the novel found much less favour among its African subjects. The celebrated Nigerian writer Chinua Achebe denounced Conrad as a “thoroughgoing racist” who portrayed Africans only as rudimentary savages. The title of Conrad’s 1897 novella, The Nigger of the ‘Narcissus’, speaks for itself – although seldom now aloud, or in public.

Conrad’s leading characters are almost all white males, his women often little more than plot points (although Emilia Gould, in Nostromo, and Winnie Verloc, in The Secret Agent, are notable exceptions). The casual anti-Semitism that was a feature of so many great works of contemporary English fiction is present, too, in some of Conrad’s work.

And then, of course, we come to all that Boy’s Own stuff about courage and cowardice and honour and the sea, so far removed in sensibility and time from the proper material of modern grown-up fiction – middle-class sex, haunted childhoods, first World War romances, writers writing, and all of the rest of it. Today who would be bothered with such stodgy old thrillers?

Step forward Maya Jasanoff, the distinguished Harvard historian who, despite being herself female, part-Asian and Jewish, has now published a highly readable and persuasive defence of the artist born 160 years ago as Józef Teodor Konrad Korzeniowski.

Turned inward on Conrad himself, these lenses become microscopes, revealing the secret biographical sources for his characters and plots. Turned outward, they are telescopes scanning the horizons of Conrad’s widely travelled world, demonstrating a critical political awareness that, Jasanoff argues, anticipated many of the challenges of our modern world, including terrorism, migration, globalisation, American imperialism, brute Russian autocracy and runaway technological change.

Born into the minor Polish gentry of Russian-ruled Ukraine, the young Conrad had seen his parents’ health destroyed by imprisonment and exile after they joined a nationalist rising against the tsars.

Orphaned as a teenager, he travelled west with the help of a wealthy uncle, indulging a romantic urge to go to sea. Eventually settling in England, he rose through the ranks of the merchant marine to become a captain. Long passages on clippers to Australia, a stint on a tramp steamer sailing out of Singapore, and a single, hellish cruise up and down the Congo river furnished the raw experiences for much of his writing career.

In the imagination of this uprooted “Dutchman” – as all non-British European sailors were known in the merchant marine, Jasanoff informs us – the age of sail, already passing, became a pastoral ideal. The honest, quietly courageous but thoughtful British seaman was his fictional model of virtue, typified by Charles Marlow, his recurring narrator.

The fate of Conrad’s family, ground up in the remorseless gears of great events, had left him pessimistic, fatalistic and sceptical

But the fate of Conrad’s family, ground up in the remorseless gears of great events, had also left him pessimistic, fatalistic and sceptical, willing to confront the brutal realities of the “civilising mission” that most of his English contemporaries found it more comfortable to ignore.

Pondering the Eurocentric, sometimes openly racist focus of Conrad’s narration, Jasanoff gives him the conditional pardon due to one who was both part of and ahead of his time: “Conrad promoted the values (as he imagined them) of the szlachta [Polish landed gentry] and the sailing ship; the dreams of the depressive who at once depended on and doubted them; and the self-critical awareness of the white man who traveled overseas and saw the limits of his own society, even if he didn’t enter into the possibilities of others.”

For those who haven’t read all of Conrad’s four masterworks, or who read them a long time ago and need some refreshing, Jasanoff’s insightful and deft sketches of their contents will fill in any gaps. Above all, this book is a timely reminder of the artistic greatness of Conrad, an untutored outsider whose innovative use of questing, uncertain narrators, of fractured timelines and grim yet exotic plots, influenced generations of admirers, including Ford Madox Ford, TS Eliot, Graham Greene, Joan Didion, John le Carré and even – although she characteristically sniffed at Conrad himself – Virginia Woolf. A remarkable achievement for a man who wrote exclusively in English, a language that, famously, he didn’t start to learn until already in his 20s.

Auschwitz 75 years on: The Holocaust’s toll for one Dublin family
Browser reviews: Kraftwerk but no scoop, a Bombay trip, and Protestant nationalism