The clown who died on Christmas Eve

Eleanor Lybeck and Rosie Lavan have created a one-woman show, Wild Laughter, to tell tell the story of their great grandfather, a stage clown 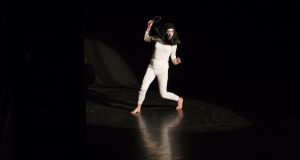 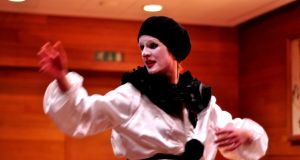 We think of Wild Laughter very much as a winter’s tale. Our paternal great grandfather Albert James was, after all, the clown who died on Christmas Eve. For us, it’s that fact more than any other that touches his biography with a kind of magic.

Albert is a relatively recent discovery. Our father left in 1993, when we were nine and five. We knew that there was something unusual and exciting about the life of his grandfather, and we knew this from things that our mother had held back, carefully preserved in the attic of our childhood home in Devon: from the trunk in which he had shipped his possessions around the world while touring as a principal actor and stage manager of the D’Oyly Carte Opera Company; from the clasp of an opera cloak he once sported; from a black leather Aspreys wallet stamped in gold with the initials AJ.

Later, we found that Albert had another guardian, Melvyn Tarran. An avid collector of Gilbert & Sullivan memorabilia, Tarran made our great grandfather’s world even more real for us in the things he owns: in articles which claim Albert was better than George Grossmith in the role of The Mikado’s KoKo; in 10ft high publicity posters displaying Albert in pastel as the star of the show; in letters dated December 1911 to our infant grandfather Noel Albert Charles James days before his third birthday on Christmas Eve – letters whose affections on reflection are so poignant, since we read them in the knowledge that Noel and his mother Annie would lose Albert two years later on that very same day.

We continue to recover Albert’s extraordinary biography in public records and published reviews. We know he shared London’s theatre land with the likes of Oscar Wilde and Ellen Terry. We know that once, in the autumn of 1891, he performed before US President Benjamin Harrison at Albaugh’s Opera House, Washington DC. We know that when the D’Oyly Carte played the Gaiety, they proved so successful that people could be heard singing Sullivan’s tunes in the streets of Dublin for weeks afterwards.

By reading his personal papers, we know the oddest things about Albert’s life off-stage – that he enjoyed gluten and almond bread, for instance. We know that, in later years, he lived diagonally across London’s Clapham Common from where our mother was born half a century later. We know that when he died at Christmas 1913 at the age of 56, his death was reported as far away as San Francisco. And we know that he is buried with Annie somewhere in Streatham Cemetery, beneath a holly bush. We treasure these odd fragments of an exceptional life as they are gifted to us, reassembling them in Wild Laughter.

The philosopher Ortega y Gasset once said that making a biography difficult makes it resemble life a little more. When you set out to tell the story of a life of which little is known, it’s even more difficult. When that little-known life was lived on stage, it’s simply ironic.

We have revelled in the challenge and the contradiction in producing Wild Laughter. Stitching together the few remnants that we have of Albert’s public triumphs and personal legacy, we tell the story of the last night of his life. Ellie plays a 56-year-old Albert: something which presents its own challenges and contradictions, but which seems entirely appropriate to the upside-down world of the clown. It is by necessity a story of moods, rather than events, told through movement, music, poetry, and prose. As a clown, Albert is in special company and we have turned to a motley crew of clowns for his words and his songs and his styles – clowns taken from Shakespeare and Angela Carter, from the cinema and the Commedia dell’Arte, from the Kinks and from Albert’s own D’Oyly Carte days.

We’ve performed Wild Laughter at locations in Oxford and Cambridge, where we have both studied and worked as academics of literature and cultural history. It’s a work that responds to the conditions of performance, and is very much a living thing. We’ve coloured black box studios and adapted blank board rooms with Albert’s animations. And for just one night later this month, Albert will be up to his unusual japes in the Boys School of Dublin’s Smock Alley Theatre – perhaps you might join him, and his company of fools.

Sidelong Glance is committed to delivering innovative, research-driven performance projects across media, in different educational and cultural settings, and to diverse audiences. The production company Sidelong Glance was founded in London by Eleanor Lybeck in 2008. She co-directs the company with Rosie Lavan. They are both university lecturers in literature: Eleanor at the University of Oxford, and Rosie at Trinity College Dublin.

Wild Laughter: a one-woman show about the lives of a clown runs at the Boys’ School, Smock Alley Theatre, Dublin, November 18th. This one-woman show fuses poetry, prose, movement, and song, and will be followed by a Q&A. Tickets at smockalley.com/wild-laughter