The Book of Joan, by Lidia Yuknavitch review – an uncanny prescience

Lidia Yuknavitch riffs on love and loss, gender and sexuality with fierce intelligence and a gritty, sometimes violent, empathy 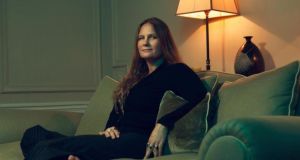 Lidia Yuknavitch: the narrative form could be at odds with her style. Photograph: Andrew Kovalev

The Book of Joan is Lidia Yuknavitch’s first book to be published on this side of the Atlantic despite being an award-winning and bestselling author in the US. A dystopian, feminist tale, released in the US last year around the same time as the hugely successful TV adaptation of Margaret Atwood’s The Handmaid’s Tale, The Book of Joan was often mentioned in the same breath and it’s no surprise the film rights have already been snapped up.

Two previous novels, Dora: A Headcase and The Small Backs of Children, followed Yuknavitch’s critically acclaimed debut, The Chronology of Water, a memoir. The author is perhaps as well known for her extraordinary life as she is for her fiction; detailed in her memoir and TED talk which had millions of views and spawned her second book published in the US last year, The Misfits Manifesto.