‘The book has become a devalued symbol of human imagination’

In an apocalyptic essay, academic and writer Fiona O’Connor asks how can the great novel, short story or poetry collection be nurtured by market-driven publishers? 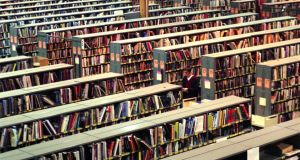 An early Amazon distribution centre in Seattle: Dennis Johnson, an independent publisher, says that “Amazon has successfully fostered the idea that a book is a thing of minimal value– it’s a widget”

A recent article in the Financial Times (Tim Harford, July 29th, 2015) considers the cost of ‘free time’ in contemporary work-life. It got me thinking about the position of writing within mass or commodity logics – ie, where we’re at now. Ernest Hemingway’s ‘Writing is re-writing’ quote doesn’t point explicitly to economics, but dollar-sign implications are lurking there.

A ‘time is money’ ethos underlies the FT piece, which tests John Maynard Keynes’ infamous prediction in a 1930s essay (Economic Possibilities for our Grandchildren) that through ‘science and compound interest’ the end of economics was nigh. Keynes predicted that by 2030 we would be eight times better off than our 1930s foremothers. And our workload would take up no more than 15 hours a week.

Partially borne out for some, the increase in income has not been mirrored by decreasing working hours – it seems that most of us work longer and harder than ever now to cover our costs – chief among them housing. This fact, coupled with the low rates of pay for writers – a median income expectation of £11,000, with an average income of £4,000 for UK and Irish published writers – has important consequences for literature. Good writing takes time.

Hemingway’s work tends to read fast, unlike Joyce’s or Stein’s, for example, but the ease of his syntax belies the slow hours of its production. Unlike many other art forms, writing involves a prolonged process, sometimes painfully so. Gustave Flaubert often managed no more than 500 words a week while working 12 hours a day on Madame Bovary for five years. Further back, in 1779 Samuel Johnson noted the pleasure of seeing ‘great works in their seminal state, pregnant with latent possibilities of excellence; nor could there be any more delightful entertainment than to trace their gradual growth and expansion, and to observe how they are sometimes suddenly advanced by accidental hints, and sometimes slowly improved by steady meditation’.

In the contemporary market economy, invisibly-handed, brand-allied and celebrity-underpinned, how is the great novel, short story or poetry collection to be nurtured? What is the compound interest on genius for the literary canon when sales are the only justification of value?

As a facet of global market-trading platforms, the publishing industry is in the control of private equity groups. These are venture capital outfits whose main attractiveness is avoidance of public scrutiny and ‘intrusive’ regulation. Their securities’ trading mechanisms are debt-leveraged – it’s about capital transfers – ultimately profit-making on debt-transfer strategies. It can be viewed as a form of Ponzi scheming – a pass-the-parcel manoeuvre lucrative as long as you aren’t the last one holding the package.

The writer, in creating her own ‘package’ or codex, invents from the imaginary realm, but the graft is real enough. Ironically this product – fruit of long and painstaking labour – once published, forms the fairly lowly basis for further imaginary leaps, no soarings – those of futures trading where the capital gains for an elite of traders leaves behind any connection to the real value of a product, or to the Real, in a manner so far-fetched, so baroque, you’d be hard put to make it up.

In Dark Pool (2012) Scott Patterson gives insight to the world of block trading facilitated away from central exchanges, a place where transparency is deliberately avoided – hence the name – where ‘a worldwide matrix of dazzlingly complex algorithms, interlinked computer hubs the size of football fields and high-octane trading robots guided by the latest advances in artificial intelligence’ seek to make a buck or two out of, among other things, books.

The key instrument to success in the dark pool realm is the acceleration of time. High Frequency Trading is about as far away from Flaubert as you can imagine getting (although commodification is a driving theme in Madame Bovary, and the perpetual non-gratification of insatiable desire, also predicted by Keynes in his essay, predicates the feverish activities on every trading floor).

In Flash Boys (2014) Michael Lewis focuses on the transformations of technology on equity trading. Signals travelling at 125,000 miles per second – the speed of light in a vacuum – are the meaning transfers that really get to the heart of the publishing industry’s concern: in the logic of bottom-line motivation: profit.

In manoeuvres that sometimes seem to violate the laws of physics, differences in time of about two milliseconds (two thousandths of a second, way beyond human perception at about a tenth of a second) can have huge effects on profits. The market as it appears on the traders’ screens is as illusory as a Harry Potter plot and through high frequency trading may vanish before your eyes like a swirl of an invisibility-cloak. A flow of binary digits from raw data feeds sweeps through computer systems and back into network connections, finds its order gateways and consummates (called ‘bit fucking’) in dollar pings faster than neurons can fire.

How does all this relate to the longueurs of the writing task, the subconscious moves and manoeuvres at play deep in the author’s mind, the accidents of recognition and fortuitous circumstances that arise and affect the outcome? The logic is simple: publishers want/need to accentuate profit; they need to shift product so they search for bestsellers. Discount deals abound. Distributors trim value as do the big bookshops – just like supermarkets squeeze suppliers – it’s a corporate thing. As Lester Freamon in The Wire would say: ‘It’s how they do!’ (Hear Slavoj Zizek on the parallels between The Wire and market capitalism.)

Writers feed a pipeline. The ideal is found in children’s literature where a winning formula is established and successive books follow – Harry Potter bankrolled an ailing Bloomsbury Publishing. Marketing values get promulgated all down the line. Qualitative concerns are downgraded. A scene in the movie version of Mohsin Hamid’s novel, The Reluctant Fundamentalist, captures the moment a Turkish publisher of quality literature is axed by two Wall Street suits. Quantitative values, in this case an ROI figure of zero, replace any interest in originality, intellectual demand or risk. The more bestsellers, the more profit. The UK book output this year was 186,000 new titles – the highest ever. In the era of the Kindle, a book costs less than a sandwich. In Cheap Words, (George Packer, The New Yorker, February 2014) Dennis Johnson, an independent publisher, says that “Amazon has successfully fostered the idea that a book is a thing of minimal value– it’s a widget.”

Much like the billions of digits coursing through fibre-optic cables, lasered skywards, mercurially ghosting computer terminals on corporate floors, pooling darkly, releasing asset-backed securities and credit default swaps that rise into the future on googolplex-wings of dollar bills (that can never be paid by the future generations who will hold the debt,) the book is a devalued symbol of human imagination.

Fiona O’Connor is a former Hennessy Short Story Prize winner. She lectures at the University of Westminster and is artistic director of St John’s Mill Theatre Company, Beaufort, Co Kerry