The best romances in YA novels 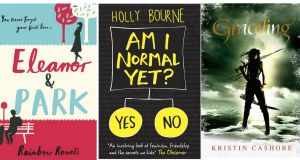 Three of the best contemporary YA novels with a love theme

Those with only a passing acquaintance with young adult fiction might presume it’s all about the romance. For a period, discussion about popular series seemed to boil down to whether one was Team Edward or Team Jacob (Stephenie Meyers’s Twilight books), Team Peeta or Team Gale (Suzanne Collins’s The Hunger Games trilogy).

Passionate readers of YA are now much more likely to criticise over-used romance tropes – the phenomenon of “insta-love”, in which two characters immediately connect and fall in love before they even know each other, has been particularly condemned. “I’m all for initial attraction,” says bookseller and writer Helen Corcoran, “but there has to be a deeper element of why this person rather than just ‘damn, you’re hot’. It’s why I like books where, even with acknowledged attraction, they become friends and it helps the romance along.”

Readers still want romance in their YA fiction – they just want it done right. A romantic element is almost always present in YA novels, whether as a main plot or subplot (though it should be noted that the need to represent asexual or aromantic characters in fiction as well is something many YA writers are conscious of). In this way, of course, it reflects many adult fiction genres – where on earth would the current domestic suspense boom be without a husband or wife or lover whose secrets threaten to destroy everything?

YA and romance writer Ruth Frances Long notes that romances work best when there’s “a certain vulnerability on both sides, where both have something to lose. Respect and enthusiasm are vital as well . . . I need to really care about both people involved to make a romance work.” Book blogger and bookseller Jenny Duffy agrees: “you need two ‘real’ characters who are complex and flawed, who see each other’s vulnerabilities and struggles, and love each other anyway. I detest happily-ever-afters. I like a sense that the characters still have things to work on themselves, and together.”

Duffy cites Evie and Oli in Holly Bourne’s Spinster Club series as a perfect example of this. “I love that Holly Bourne had them realise they weren’t well enough for a relationship, and that when they got together it wasn’t a magic cure. They support each other, and it’s a very sensitive exploration of dating and mental illness.” Fellow book blogger Aoife Bennett concurs: “Both struggled with mental health issues and both wanted and tried their best to help the other through it. I also loved how Evie’s world didn’t completely shift when she and Oli started dating – she was still as true to herself as always.”

The alpha hero is less appealing than one might imagine; Cath and Levi from Rainbow Rowell’s Fangirl are another favourite couple. Maera Black, a teacher with a MA in children’s literature, notes Levi as “such a well-portrayed male character – respectful, supportive, vulnerable. He’s not perfect. He’s flawed and sexy.” The title characters in Rowell’s Eleanor and Park similarly work well for readers. Children’s bookseller Lisa Redmond describes them as “a wonderful couple: awkward and embarrassed at first but you really root for them. Their shared interest in music gives them a connection and a way of communicating without words.”

Mutual respect is key for these relationships. Children’s bookseller Lorraine Levis praises the relationship between Steffi and Rhys in Sara Barnard’s A Quiet Kind of Thunder for presenting this respect “and consideration, while also acknowledging their own need for independence and growth”. Maera Black also gives the example of Po and Katsa from Kristin Cashore’s fantasy novel Graceling, in which the warrior Katsa wants to avoid having children. “Po is obviously respectful of that – because he’s a decent human being. Katsa eventually finds a way around the risk of conceiving and the emphasis is on female sexual enjoyment” – a focus that is still often lacking in YA fiction that portrays sex. (Judy Blume’s Forever, first published in 1975, is by no means her best-crafted work but remains popular precisely because it has a heroine who has and enjoys sex – and doesn’t end up dead or pregnant by the end of the novel.)

Essayist and blogger Ellen Brickley notes the “sex-positive” nature of the relationship between Jeane and Michael in Sarra Manning’s Adorkable, depicting these “two very different people who fall for each other in spite of being from different worlds – without either having to leave their world”. She is conscious of the need for some realism within romance, pointing to the works of Stephanie Perkins. Brickley describes Perkins’s Anna and the French Kiss as “delightfully swoony but showing realistically that 18-year-olds often meet and like many people”, while citing the romance within Isla and the Happily Ever After as “a rare example of a romance between privileged kids who are aware of their privilege and try to grow beyond it.”

In addition to being conscious of romance that avoids cliche, YA readers also appreciate love stories beyond the boy-meets-girl variety. Gráinne Clear, editor at Little Island, praises the romance between two teen girls in an upcoming title of theirs, Meg Grehan’s verse novel The Space Between. Blogger Courtney Smyth praises Ethan and Simon from Becky Albertalli’s Simon Vs The Homosapiens Agenda – “it was the kind of pure, happy, complex first love that melted my heart.”

There’s more to life than romance, certainly, although it’s worth noting women are more likely to be chastised for both reading and writing about it (when men write romance, it is often said, it’s “a love story”). But the level of critical engagement readers in a particular field have shouldn’t be underestimated – even in self-declared “romance” genre novels, as Janice Radway’s seminal text Reading the Romance demonstrated in the 1980s. YA readers don’t simply want a love triangle or swoony silliness or (as one Twitter account parodies) a “brooding YA hero”; they demand much more from the romantic relationships in their fiction.

Claire Hennessy is a writer, editor and creative writing facilitator