Jon Bilbao’s original, caustic revenge tragedy shows that everyone has their limits 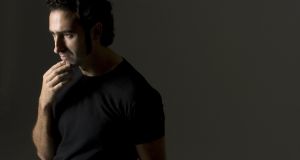 Jon Bilbao: the author “doesn’t waste a word in a fluent, exciting narrative with as many twists as a mountain pass”

A tense trip to Mexico is about to culminate in a hurricane. For poor, stressed-out Joanes it is all he needs. Back home in Spain his air conditioning business is in crisis. Obliged to participate in his obnoxious father-in-law’s second wedding celebrations adds to his ongoing humiliation. His wife’s father has paid for everything, just as his own father had bailed him over the years. Still there is a tiny chance that salvation is on the way in the form of a possible contract, if Joanes can drop his price.

Jon Bilbao’s taut three-act drama lives up to its inspired choice of an apt quote taken from Graham Greene’s The Third Man: “A man doesn’t alter because you find out more about him. He’s still the same man.”

Joanes may well be unchanged but the initially depressed father of a sulky teenage girl writing a top-secret marathon vampire novel, moves through a series of personality transformations that are shocking yet plausible. A reader may end up feeling slightly wary of Joanes under pressure, even though Bilbao, who sustains his intense narrative through several ever increasing shifts in mood, has created a revenge tragedy of caustic originality.

If there is a moral, there are in fact several, it could be that every man has his limits. Joanes, likeable and world weary, has reached his many times. He appears to have spent his life seething. He loves his wife and she still likes him. Their mutual affection and shared sense of humour is clear if understated.

This terrific yarn, yet another example of outstanding contemporary fiction from Spain – much of it being published in excellent English-language translations by the pioneering Hispabooks in Madrid – has more than its share of intensifying extremes which also reflect the mounting hurricane.

Joanes is about as Everyman as one could wish for. He is simply doing his best, only life never seems to go right. His lack of rapport with his domineering, successful artist father-in-law is very funny. Joanes does not like modern art but selling the older man’s paintings, tossed off at speed – “Do you need me to throw you a bone till then? I can whip you up a couple of paintings. It won’t take long. At this stage of the game, I can do them with my eyes closed” – has often helped.

The resort is being evacuated and the holiday makers are ready to leave. Only the painter insists that Joanes has a sauna with him. The physical claustrophobia is nothing to the psychological straightjacket. Our helpless anti-hero needs to be able to think in order to prepare for a phone conversation that could either save his business or finish it completely. Most pressing is the fact that his phone battery is about to expire and electrical supplies have been cut off for safety reasons.

Still the Same Man has a stylish, conversational ease countered with the pace of a thriller. It is also hilarious; much of the dialogue is heated and resounds with exasperation. The enemy is severe weather, not an invading army. Bilbao is exploring a state of mind. As the narrative progresses it is as if the storm is keeping pace with the thoughts which are bombarding Joanes. As he drives he is distracted, if sufficiently alert to notice that he may have hit something. He has. On investigating, he expends a good deal of time and effort attempting to do the right thing. This is a defining touch; Bilbao has created a character whose biggest problems in life are his determination to do the right thing and the difficulties such endeavours invariably encounter.

As he resumes driving, his mind in turmoil, he sees two figures on the roadside. They aren’t hitchhikers. One of them is in a wheelchair. On stopping he recognises a maths professor he once studied under half a lifetime ago. The couple may have been asked to vacate the bus on which they were travelling. The older man only acknowledges Joanes as a fellow Spaniard, not as one of his former students.

Details of a fraught history begin to filter out: Joanes had been an engineer with a future and an early chance of a good job. It all began well only to fall apart. His professor may have played some part in the failure, or so Joanes likes to think. Either way, the old mathematician was never nice. “The professor belonged to a family of dentists. His grandfather, father, and two of his uncles all practised dentistry . . . The professor’s students liked to point out the appropriateness of him being part of a family who’d made their money inflicting pain on others.”

No one is completely all bad and at least the professor, now retired if still active on the conference circuit, can muster up compassion for his wife. Their son appears to have been involved in an accident. But the old man has lost his phone, possibly when being ejected from the bus. Joanes needs to preserve his fading battery for that very important phone call he is unlikely to receive. The tension mounts as they discover they are driving in the wrong direction, back towards the hurricane,

This is a very good novel, sharp and engaging, which simply gets better and better to arrive at brilliant. The Coen brothers should secure the rights. When Joanes and his passengers arrive at a broken down hotel, the narrative really takes off and Sophie Hughes, whose recent translation of Iván Repila’s wonderful fable The Boy Who Stole Attila’s Horse (2013) established her gifts, does masterful work here in conveying the laconic tone as well as the power shifts.

The professor’s arrogance knows no bounds in normal circumstances, but having found himself in a desperate situation, he sets out as if by divine right to acquire the only phone within reach. But Joanes is not quite a pushover. There’s a skirmish and the men are asked to leave the hotel. Back out into the storm they go, a parody of the holy family.

In a filthy old shelter, Joanes establishes a shaky command. Out of the stormy night arrives a black man from Alabama accompanied by an elderly chimpanzee named “Gagarin. Like the astronaut.” The humour becomes far darker and the violence intensifies. Bilbao doesn’t waste a word in a fluent, exciting narrative with as many twists as a mountain pass. You never can imagine what exactly a person under pressure might do, as good old Joanes confirms with manic daring.