Consumed by grief after my mother died, I felt terribly isolated and poetry offered comfort. The fact others had experienced this pain and survived also gave me hope 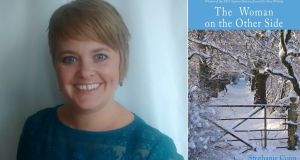 Stephanie Conn: The reader is taken on a geographical journey but it is the emotional landscape I am most concerned with. The notion of who we are “on the other side” of our experiences and our relationships

When I was 19, my mother lost her 10-year battle with cancer. She was 46. I was at university, in my first year of teacher training, surrounded by young adults enjoying newfound freedoms. Consumed by grief, I felt terribly isolated and poetry offered comfort. The fact that others had experienced this pain and survived also gave me hope.

I studied English throughout my schooling but found poetry quite difficult at times and struggled to relate to a lot of what we read. Suddenly poetry became relevant and vital. As well as reading more, I started jotting down lines and phrases but it was another few years before those fragments developed into poems.

Teaching full-time and becoming a mum of two didn’t leave a lot of time to write but my desire to do so was growing. When I was made redundant, I welcomed the opportunity to develop the literacy programme, Passport to Poetry, and began delivering creative writing workshops in local schools.

I now had more time to write and eventually worked up the courage to join a writing group. Encouraged by the group’s positive feedback, I began submitting work to journals and magazines. In 2009, I secured a bursary to attend the John Hewitt Summer School in Armagh and this proved a turning point. To hear others read their work and discuss literature with such passion was inspiring. Witnessing others taking their writing seriously encouraged me to do the same.

I immediately applied to the masters programme at the Seamus Heaney Centre at Queen’s University, Belfast. Between 2010 and 2013, I completed a part-time MA in creative writing under the tuition of Ciaran Carson, Medbh McGuckian and Sinead Morrissey.

During this period, my poems were being published more regularly and I submitted sequences to poetry competitions. In 2012, I was shortlisted for the Patrick Kavanagh Award and highly commended in the Doire Press Poetry Chapbook and Mslexia Poetry Pamphlet competitions. It was extremely encouraging to learn that the work was connecting with others.

The following year I was selected for Poetry Ireland’s Introductions Series. For the most part writers work in isolation so it was great to meet other poets on a similar path. I was delighted to have the opportunity to read at the Irish Writers Centre.

I was well and truly hooked but by the time I completed my MA, I was back teaching four days a week and had just been offered a full-time position. My writing was going to have to take a back seat for a while – or so I thought.

I was exhausted all the time but given the demands of study, work and family this was not surprising. However, when my walking and speech became affected I knew there was more to it. My symptoms worsened – I was now in constant pain, was extremely weak and spent a lot of time in bed. A year of investigations followed and I was eventually diagnosed with the debilitating condition fibromyalgia.

Medication helped but the life I had known was gone and I felt stripped of my identity. There were so many things I could no longer do but I could still write and now I had the opportunity to commit fully to it. This sense of purpose was a welcome positive in the face of so many negatives. Fibromyalgia is an unpredictable thief and I have to be flexible with my writing routines and expectations but I make the most of my better days and write as much as I can.

I started working on a new sequence of poems inspired by a visit to Tasmania a few years earlier. I added these to the poems I’d written over the previous three years and began to arrange my manuscript, The Woman on the Other Side.

When I saw Doire Press had an open reading period I sent off some poems. I’d been aware of the press since entering their chapbook competition in 2012 and had watched them go from strength to strength. I had read their poetry books and been to a few Doire Press readings – it was not just the poetry that impressed me but also the relationship Lisa [Frank] and John [Walsh] had with their poets. I had no hesitation in submitting my work and was delighted when they accepted the collection.

Poet Moyra Donaldson thinks the collection is “wonderfully wide ranging yet still retaining a sense of cohesion”. There are poems set in the Netherlands, Russia, Canada and Australia. The reader is taken on a geographical journey but it is the emotional landscape I am most concerned with. The notion of who we are “on the other side” of our experiences and our relationships. According to Medbh McGuckian, I “lay bare tensions between the domestic and the sexual, the natural and supernatural from a fiercely feminine perspective”.

By the time Doire Press had decided to publish The Woman on the Other Side, I was already busy with new work. I received an artist’s career enhancement award from the Arts Council of Northern Ireland to research and begin writing my second collection but also to raise my public profile. I am an introvert but I had to put that to one side. I engaged more fully with the poetry community and am so glad that I did as I have experienced great warmth, encouragement and friendship.

I continued submitting new work for publication but also entered more poetry competitions. In 2015, as well as being highly commended in the Gregory O’Donoghue Poetry Competition and coming third in the Dromineer Poetry Competition, I won the Yeovil Poetry Prize, the Funeral Services NI Poetry Prize and the inaugural Seamus Heaney Award for New Writing.

Having successfully launched The Woman on the Other Side, I am currently giving readings and facilitating workshops around the country. This autumn, I will literally take the collection to the “other side”, as I return to Australia to read at the Tasmania Poetry Festival.

The Woman on the Other Side is published by Doire Press