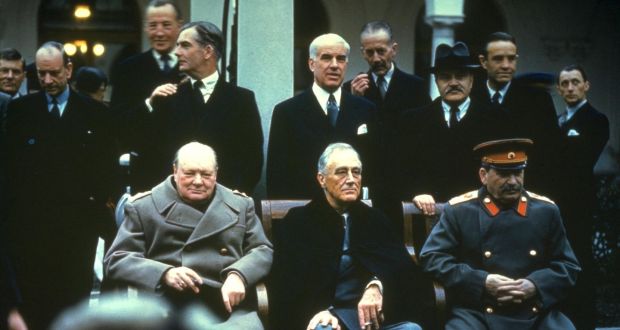 Sean McMeekin’s contention that the second World War was more Stalin’s war than Hitler’s has a long and dubious pedigree reaching back to the war-revolution conspiracy theory of the interwar years. According to this myth, Stalin plotted to precipitate a new world war in order to foment global revolution.

In truth, there was nothing Stalin feared more than a major war. While the first World War had enabled the Russian Revolution, that was followed by foreign military interventions which came close to strangling Bolshevism at birth. Stalin’s nightmare scenario was the revival of that anti-communist coalition. War did offer opportunities – and Stalin certainly took advantage of them – but war also posed an existential danger to the Soviet state.

So sparse is the evidence for the war-revolution hypothesis that McMeekin resorts to citing a blatant forgery: a document purporting to report on a speech Stalin supposedly made in August 1939 in which he spoke about the Sovietisation of Europe as a result of the war he intended to provoke. The document in question initially appeared in the French press shortly after the outbreak of war and was plainly propaganda designed to discredit Stalin at a time when he was collaborating with Hitler.

A legitimate piece of evidence cited by McMeekin are the private remarks made by Stalin in September 1939: “A war is on between two groups of capitalist countries. We see nothing wrong in their having a good fight and weakening each other. We can manoeuvre, pit one side against the other to set them fighting each other as fiercely as possible.”

But McMeekin lets his readers down by not quoting what Stalin also said: “We preferred agreements with the so-called democratic countries and therefore conducted negotiations. But the English and French wanted us for farmhands and at no cost.”

What these remarks actually show is that having failed to form an anti-Hitler coalition with Britain and France, Stalin instead opted for neutrality and the Nazi-Soviet pact, intended to further protect Russia from the consequences of war.

According to McMeekin, it was Stalin who goaded the Japanese to invade Manchuria in 1931 and China in 1937. He says the Soviet campaign for collective security against fascist aggression was a sham, as was Moscow’s support for Republican Spain during its civil war. Then, in 1939, Stalin engineered an Anglo-French-German war over Poland. Allied to Hitler, Stalin overplayed his hand by refusing to deepen his pact with the Nazi dictator. That disastrous miscalculation almost led to the Soviet Union’s defeat in 1941, says McMeekin, but Stalin’s bacon was saved by western military aid, the crucial source of all subsequent Soviet victories over Hitler’s armies.

His most bizarre claim is that in spring 1943 Stalin approached Hitler to offer an armistice. During the war there were numerous fake news stories about peace feelers being extended, many of them generated by intelligence agencies. The Soviets played this game, too, but there is no hard evidence of any serious intent to negotiate a separate peace with Hitler. Why would Stalin do such a thing after the resounding Soviet victory at Stalingrad in January 1943? And why risk alienating his British and American allies when they were supplying him with massive material aid, which McMeekin insists the Soviets were dependent on?

To his credit, McMeekin steers clear of the wilder claims of right-wing historical revisionism. He doesn’t excuse Hitler’s attack on the Soviet Union as a preventative war or claim that Stalin was preparing to attack Germany. Nor does he blame the Holocaust on Stalin.

Shorn of its polemics there is some good history in this book. McMeekin writes well and has the language skills to comb through a huge amount of archival material, though in the Russian case not always accurately. There is much interesting detail about allied supplies to Russia, the Warsaw Uprising of August 1944, the Soviet plunder of Germany in 1945, and the war with Japan.

McMeekin’s relentless anti-communism keeps him focused on the dark side of the Soviets’ war – the Katyn massacre of Polish POWs, the deportation of ethnic groups accused of collective disloyalty, and Stalin’s maltreatment of the families of Soviet POWs, including that of his son, Yakov, who died in German captivity in 1943. This is fair enough. Arguably, Stalin and the Red Army did save the world from Hitler and the Nazis, but the cost was brutal.

In conclusion McMeekin argues the West should have confronted Stalin during the war and formed “a broad international coalition against totalitarian aggression”, an alliance that could have included “pro-Axis Hungary and Fascist Italy”. As to Hitler, he could have been dealt with by a peace deal that would have saved Western Europe from Nazi occupation and may even have extracted conquered Poland from his clutches.

This book will certainly enhance Prof McMeekin’s reputation as an ideologically-driven conservative historian. His fantastical speculation that standing up to Stalin would have produced a better outcome than standing up to Hitler may appeal to those who share his fervent anti-communism. More impartial readers will recoil from the book’s distortion of the complex and multi-faceted history of the second World War.

Geoffrey Roberts is Emeritus Professor of History at UCC and a Member of the Royal Irish Academy. His Stalin’s Personal Library: An Intimate History of a Dictator and His Books will be published by Yale