Review: Douglass, an escaped slave forced to flee the US in 1845, was so moved by the poverty he saw in Famine-era Ireland that he felt he must speak out against the causes of human suffering generally 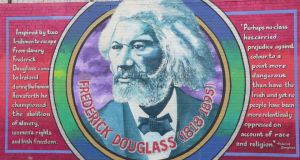 Frederick Douglass was an escaped slave forced to flee the US in 1845, aboard the paddlesteamer Cambria out of Boston, when his autobiography, Narrative of the Life of an American Slave, was published. He went on to become the most prominent African-American of the 19th century, being called “the most impressive man I ever met” by Abraham Lincoln.

He landed in Ireland in August 1845, campaigning for action against the slavery laws of the United States on behalf of the American abolitionist movement. “I have spent some of the happiest days of my life since landing in this country,” he wrote to William Garrison, one of the founders of the American Anti-Slavery Society.

The first signs of potato blight became evident soon after he arrived. It was a catastrophe that over the next two years would kill a million and send millions more into penniless exile.

By the time Douglass reached Limerick, in November 1845, the Limerick Reporter was writing: “The rot of the potato continues to so engross the public mind that scarcely any other topic is discussed.”

Douglass was appalled by the numbers of beggars on the streets of Dublin; he likened the situation of the Irish poor to that of the American slave. “I am not only an American slave, but a man, and am bound to use my powers for the welfare of the whole human brotherhood,” he wrote to Garrison as he struggled to stick to his single-issue mission. “I am not going through this land with my eyes shut, ears stopped, or heart steeled”.

Douglass was invited to speak on a platform with Daniel O’Connell in Conciliation Hall, the Repeal Association’s headquarters on Burgh Quay in Dublin. It now houses the Garda National Immigration Bureau, where asylum seekers are processed and deportees assembled. Douglass, who arrived in Ireland on false papers, was invited to dine with the lord mayor. It’s a lot better than the reception asylum seekers receive nowadays at the hands of Ireland’s refugee laws and direct-provision system, which leaves families in limbo for years, to live in one room, on €19 a week.

Born on a plantation
Laurence Fenton gives us Douglass’s background – born and reared on a slave plantation in Maryland – synopsised neatly from Douglass’s celebrated narrative. Douglass once met two Irishmen on the wharf in Baltimore. They encouraged him to escape to Pennsylvania. Douglass, knowing that white men sometimes lured slaves to try to escape, so they could claim the recapture bounty, feigned ignorance, but he remembered the two Irishmen, and credited them with triggering his ambition to break for freedom, which he accomplished in 1838.

Fenton gives us a fascinating insight into the strains of emphasis within the abolitionist movement, in Ireland and in the US. Douglass was somewhat at odds with Garrison. They held each other in the highest regard, but Douglass was so moved by the poverty he saw on the streets of Dublin, and in Ireland generally, that he felt he must speak out against the causes of human suffering generally, even if it was not directly pertinent to US slavery.

The Quakers of Ireland were the mainstay of the anti-slavery movement in Ireland, with support from the footsoldiers of O’Connell’s Repeal Association. Richard Webb, Richard Allen and James Haughton were inveterate campaigners and helpful hosts, and Webb published Douglass’s memoir. But there were strains, too. Douglass’s travelling companion, James Buffum, left for Britain after a dispute. Douglass also fell out with Webb, who wrote disparagingly of him to other abolitionists.

Douglass was recognised as one of the great orators of his day. He had taught himself to read, and always carried a well-thumbed copy of The Columbian Orator, a popular collection of speeches. Newspaper reports of his speeches in Dublin, Wexford, Waterford, Cork, Limerick, Belfast and elsewhere are littered with phrases such as “prolonged applause” and “approving interruptions”. Women played an active role in organising his speaking engagements, the Quakers Susanna Fisher and Isabel Jennings developing close relationships with him during his stay in Ireland.

Strains of campaigning
Anyone who has campaigned on social justice or human-rights issues will recognise in this book the strains inherent in any broad-based movement such as that against slavery. Douglass had to pick his way through a thicket. He was under direction not to associate too openly with O’Connell and his movement to repeal the Act of Union, as this would alienate unionist support of abolition. He had to be careful not to exacerbate strain between Protestant and Catholic abolitionists in Ireland. He criticised US Methodists, many prominent members of the church being influential slaveholders, as a result of which he was sometimes barred from Irish Methodist halls.

While in Cork, Douglass took the total abstinence pledge from the campaigning priest Fr Theobald Mathew. Douglass was a teetotaller anyway, having hated the occasional drink-sodden holidays allowed to plantation slaves – a strategy slaveholders used to quell discontent. Fr Mathew, however, later incurred the disdain of the entire anti-slavery movement by ingratiating himself with southern slaveholders on his tour of the US, not only refusing to condemn the slave system but also saying that nothing in the Bible prohibited it.

President Obama
Douglass’s friendship with Daniel O’Connell has become relatively well known in the past few years, mainly because of President Obama’s speech on College Green during his visit to Ireland in 2011. What is less well known, and is treated in detail here, is O’Connell’s steadfast opposition to the system of US slavery. He was consistent in spite of virulent opposition from his main funding source, the cash-laden repeal movement in the US, and he rejected overtures of support for repeal in the House of Commons if he would desist from his opposition to slavery. This is in stark contrast to some of his supposedly more radical opponents in the Young Irelanders. John Mitchel, for example, wanted to own a slave plantation in Alabama “well stocked with healthy Negroes”.

Fenton’s style is informative and refreshingly unfussy. He charts the nuances of the anti-slavery movement clearly, and the added complication of spreading the message in Famine-hit Ireland. Douglass’s transformative sojourn in Ireland has been dealt with in two novels, Richard Bradbury’s Riversmeet, from 2005, and Colum McCann’s TransAtlantic, from last year. In this important addition to the mounting store of study on Douglass and Ireland, Fenton’s factual account is both rigorously researched and fluidly written, deftly juggling chronological sequence and narrative threads. It’s a fascinating read, with sharp lessons for anyone campaigning on issues of social justice and human rights today.