Set the Boy Free, by Johnny Marr: memories of a charming man 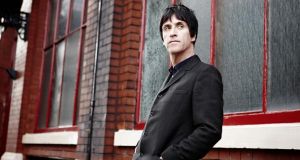 Johnny Marr: grew up surrounded by music, Irish relatives and a loving family. 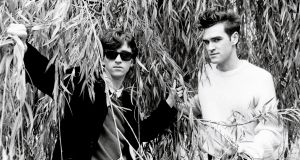 Marr with Morrissey in London in 1983. “At its worst, his polite evasion creates a Pollyanna version of the Smiths’ story.” Photograph: Clare Muller/Redferns/Getty

Destiny. A story that begins with the purchase of a toy guitar for a wide-eyed five year-old ends with the building of his own signature instrument. If the guitar is one unifying theme in this book, then another, as Johnny Marr acknowledges, is luck or fate.

None of this joyful saga would have occurred if the Grim Reaper had been more diligent. As a child, Marr fell through a skylight, plummeting 30ft, but was saved by a fortuitously placed workman, who cradled his fall. “I’d landed in a five-feet gap between huge sheets of glass and a forklift truck . . . a couple of feet either side it would have been all over.” In 1986, he was involved in a car crash, miraculously surviving without serious injury. Two years later, an explosion in Paris was scarily close, with oblivion only seconds away (“the area where I’d been sleeping had been blown up by a bomb”).

These near-death experiences resonate with the reader, along with the constant reminder of alternate realities. Although the Morrissey/Marr partnership is the perfect union, it is salutary to consider how easily the guitarist might have collaborated with another vocalist before forming the Smiths: Matt Johnson, Ian McCulloch and Ian Brown were all possibilities. Consider too, what might have occurred had Marr stuck with singer-songwriter Rob Allman (“a great musician”) in White Dice. Then again, Marr always had the knack of determining his own fate, famously tracking Morrissey to his lair and establishing the Smiths as the ultimate indie group of the ’80s.

Set The Boy Free begins promisingly with memories of growing up in Ardwick Green, Manchester. He is surrounded by music, Irish relatives and a loving family. His parents are even younger than Morrissey’s – his beautiful, photogenic mother was only 18 when Johnny was born. There is a sense of childlike wonder in these early pages, particularly when Marr describes his experiences of sound and colour, transcendent moments that he considers “supernatural”. His immersion in fashion and pop culture is evident from an early age. As an eight year-old, he is asking his father for a Crombie coat. School experiences, Manchester City, records, gigs, T. Rex, glam rock all follow rapidly. In Wythenshawe, he befriends a homosexual Bowie fan without feeling any kind of prejudice and dates a 14-year-old non-Catholic, Angela Brown, whom he will later marry. It is a vibrant scene with a formidable company of young musicians and scenesters. He forms bands, dreams of glory and seems invested with endless optimism.

The book flows freely, buoyed by Marr’s plain prose. Chapters fly by, often rather too rapidly. This has less to do with Marr’s breezy approach than his publisher’s production team. At 454 pages, the book appears hefty, but it is actually rather short: there are only 29 lines per page, with an overgenerous type/leading of 13.25/16.75. Marr rushes through a series of set pieces, missing subtle nuances, ignoring rival perspectives, and preferring superficial description to clever analysis. With few exceptions, his characterisation is weak. A cast list of potentially fascinating people wander into the narrative, then disappear without further explanation. The reader is constantly left crying for more.

More than a third of the book is devoted to the Smiths. This ratio appears about right given their importance, but this section is arguably the least impressive or revealing. Marr rightly reminds us that he was the catalyst in the creation of the Smiths. Over-sensitive Morrissey fans may bridle slightly at the occasional proprietary pronoun (“I thought my band were the best”, rather than “the” or “our” band), but this seems justified in the main.

The chirpy tone is engaging, but there is a detectable reticence in Marr’s retelling and an absence of revelations. There are plentiful anecdotes thrown in, but most of them we’ve heard or read before in books, retrospectives, documentaries and guitar magazines. It is as if Marr has exhausted his stock of memories and must now rely on over-familiar tales. These are interspersed with some funny asides – such as Marr’s admission that he is not keen on Oscar Wilde, or cats. One wonders if the feline-loving, bard-fixated Morrissey ever knew. There are some revealing studio reminiscences, most notably sustained pieces on the recordings of This Charming Man and The Queen Is Dead, but most of the other songs have been better documented in magazine specials. The band politics, money issues and summary conflicts are largely glossed over or ignored. Only in the chapter titled ‘Crash’ is there a spirited attempt to explain at length the circumstances leading up to his leaving the group. Elsewhere, his dictum is: accentuate the positive.

At its worst, Marr’s polite evasion creates a Pollyanna version of the Smiths’ story, but mythology is sometimes as important as unvarnished truth in rock lore. Like the Beatles, the Smiths represented the image of four lads against the world – at least for a time. Marr is correct to point out that “Smiths fans were looking for something that expressed their times and culture” and that, percentage points notwithstanding, “the band were close and had become quite an insular gang”.

There is a tremendous feeling of liberation once Marr leaves the Smiths. The final third of the book is a life-affirming account of his adventures with a long list of musicians, singers, producers and film-makers. Whereas he sounded cautious and guarded about the Smiths, he romps through the closing chapters with aplomb. He reconnects with the Smiths’ saviour, Joe Moss, reconciles with Andy Rourke and almost wins Morrissey over to the idea of a reunion. In between, there are refreshingly new accounts of his work with Talking Heads, the Pretenders, Electronic, Kirsty MacColl and The The, plus passing encounters with Keith Richards, Bruce Springsteen, U2, Oasis, Bert Jansch and Patti Smith. Perhaps the funniest moment is when he encounters Paul McCartney. Marr is seeking some higher wisdom on how to survive the aftermath and legacy of the Smiths. The former Beatle simply observes, “That’s bands for ya”. As Marr marvels: “That was it, the sum total of his evaluation.” The words are subsequently adopted by the guitarist as a personal Zen-like mantra.

The changes Marr undergoes are remarkable. Determined to extend his artistic life, he gives up drink, drugs and smoking, becomes a vegan and ultimately a middle-aged marathon runner. There is autumnal success after he relocates to Portland, Maine and achieves a number 1 album with Modest Mouse. Interestingly, it is frontman Isaac Brock’s lyrics that are chosen for extensive quotation in the book. “In Isaac I’d found someone whose words I could read just for personal pleasure, whether I was involved or not.” Describing the group as “a brotherhood”, Marr concludes that “travelling and playing with Modest Mouse . . . had been the best time of my life”. A telling observation.