Selected Poems, by Vona Groarke: the arc of a singular poetic voice 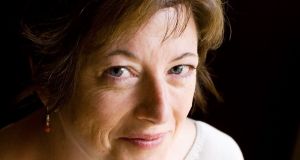 Vona Groarke’s Selected Poems comprises work from six full collections, beginning with Shale (1994) and ending with her most recent collection from the Gallery Press, 2014’s X.

Won’t you call for me at my house by the lake?
Cedar of Lebanon. Silver Birch.
Won’t you take me in your boat to the centre of the lake?
Wych elm. Wych elm.

This domestic theme was given explicit, book-length treatment in her second collection, Other People’s Houses, a volume that also marks a shift in tone from the haunted incantations of Shale to a snappier, chattier, more informal style.

It is, moreover, a style of rueful self-awareness; one poem has the speaker acknowledging “the porch where I used to write those / flowery poems before I knew you so well”; while the delightfully scathing Folderol witnesses the speaker writing 24 words for “nonsense” on the body of her errant lover: “Including, for the record: blather, drivel, trash, / prattle, palaver, waffle, balderdash, gibberish, shit.”

It is fascinating to observe the change in Groarke’s style from first to subsequent volumes, because the more informal tone and that most Muldoonian of signature tropes, the renovated cliche (“soon to be thin air; nothing to write / home about”) would on first examination seem to run counter to her instincts as a poet of profound lyricism.

Is there a poet since 1990 who has not been influenced by Muldoon’s ironic, corner-of-the mouth approach? Out of this tension, however, some very fine work is generated, and subsequent volumes display the integration of these two ostensibly conflicting impulses: worldliness and the drive towards lyric release.

The selection from 2002’s Flight, for instance, combines the intense, lyrical eroticism of Veneer with the satirical but empathetic ventriloquism of Cuttings: “We’re gardeners, you see, / Sheila and me. We swop clippings and advice. / We’re martyrs to the programmes on TV.”

In her third and fourth collections, Flight and Juniper Street (2006) respectively, Groarke’s voice also expands pleasingly in ambition: here are poems prepared to tackle big themes, albeit from a slant angle.

Imperial Measure examines the events of 1916 from the point of view of the rebels’ provisions , taking as its starting point a comment by Patrick Pearse in a letter to his mother. The 138-line Athlones from Juniper Street is a dreamy, mazy meditation on what might be termed “midlands of the mind” – a virtuoso demonstration of what Groarke does exceptionally well: marshalling the atmospherics of light and water in service of an increasingly abstract vision of reality.

A recurring preoccupation with language emerges from Flight onwards. This certainly owes much to Heaney’s “soft gradient / of consonant, vowel-meadow” in its tendency to juxtapose the features of landscape and the parts of speech, as in The Local Accent:

This river is pitched so far from the sea
It announces itself in elision, as though everything
Unsaid could still bed down in depth and unison . . .

The risk with a poetry of such intense gorgeousness is that it becomes entranced by its own rhetoric and loses its moorings altogether. If there is at times a suspicion of mannerism in Groarke’s higher-flown moments – “what need have I / of the night’s jet-black, / outlandish ornament?” – it is reined in by a sort of native earthiness, as in Away, where the speaker meditates on long-distance parenting: “I babysit by Skype, / breakfast to their lunch, / lunch to their dinner. // I straighten uniforms, ask French / nag music practice, argue Friends / trim their Bebo access.” Again that productive tension between the lyric drive and the domestic; Groarke is too careful an artist to allow many moments of unbalance. And this is above all a poised voice – Selected Poems evidences a poet of great self-awareness and meticulous craft.

If a selected poems represents a moment of mid-career stocktaking, Vona Groarke can reflect, here, on work of richness and substance: hers is a poetic house of many mansions.

Caitríona O’Reilly is a poet and critic. Her most recent collection, Geis, was awarded this year’s Irish Times Poetry Now prize