Sebastian Barry: ‘My son instructed me in the magic of gay life’

Days Without End, about an Irishman who fights in the US civil war, cross-dresses and marries a man, has won the Costa prize. Do his family mind him plundering their stories? 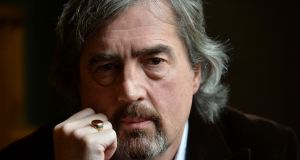 Sebastian Barry: wrote an open letter in support of a yes vote ahead of the 2015 referendum on same-sex marriage. “I felt I had to do something, so I wrote to the Irish Times, which is the default action of the middle-aged Irish Catholic. “ Photograph: Alan Betson 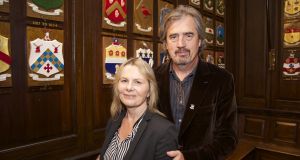 Sebastian Barry and his wife Alison Deegan. The couple have relocated temporarily from Wicklow to London so she can develop her screenwriting career. Photograph: Sara Freund

Days Without End is a short book about a vast subject – several vast subjects actually, from Irish emigration to gay identity and the making of America. The Costa judges, who have just named it book of the year, called it “miraculous”, the biggest miracle being that quite so much can be packed into 260 pages. Speaking the morning after receiving the award, Sebastian Barry tells me he has already been inundated with offers for the screen rights. The book will make an extraordinary film, but it will have to be epic in scope. Call for Martin Scorsese.

Barry has won the Costa prize before – for The Secret Scripture, published in 2008. He is the first novelist to win the award twice but, earlier in his career, he was better known as a playwright. When Seamus Heaney saw Prayers of Sherkin, a play that’s now two decades old, he told Barry: “That lyric thing is risky, isn’t it? But I think you got away with it.” Barry smiles and says: “I’ve been trying to get away with it ever since. Like a Jesse James or a Billy the Kid – get down to Mexico before they get a hold of you.”

Despite being garlanded with awards, Sebastian Barry isn’t nearly as well known a name as, say, Julian Barnes or Hilary Mantel, but that doesn’t bother the 61-year-old. It could even be a good thing. “I do think it’s important – when you are trying to get down to Mexico – that you are travelling a little bit under the radar betimes. And I relish that.” Betimes: a very Barry word, steeped in Irishness and literariness.

To win the Costa once is an achievement, to win it twice … “looks like carelessness”, says Barry, finishing my sentence with a laugh. He has a mordant sense of humour, on show throughout Days Without End, which is brutal and breathless but full of funny lines. How else could the young narrator – Thomas McNulty, an Irish immigrant in 1850s America who gets caught up in conflicts with Native Americans and the civil war – survive?

There is one other point about McNulty: he is gay – not that the word would have meant anything in 19th-century America. That, says Barry, is one reason why the book is short: his narrator did not have the words or the notions to make it longer. McNulty falls in love with a young American man, cross-dresses and marries him. They adopt an orphaned Native American girl and build an unlikely family in Tennessee – a paradise created after the hell McNulty and his lover experience when they join the army.

Days Without End is dedicated to Barry’s son Toby – and McNulty’s sexuality is also a tribute to the teenager. “Three years ago, when he was 16 and I was doing the reading for this book, Toby was very unhappy, and when a young man is unhappy we must take note. I was desperately trying to find out what was wrong, but you can’t ask him directly. You have to be a sleuth, a kind of Sherlock Holmes of his unhappiness.”

The anxiety continued until one day Toby gave a name to his turmoil. “He came into our bedroom and said, ‘The thing is Dad, I’m gay.’ I can’t describe to you the immense sense of relief and freedom in the very speaking of the words. His unhappiness fell away, my unhappiness fell away, and from that moment on we entered into this extraordinary period where he was instructing me in the magic of gay life.”

At the time of the 2015 referendum in Ireland on same-sex marriage, Barry wrote an open letter – with his son’s permission – in support of a yes vote. “I felt I had to do something,” he says, “so I wrote to The Irish Times, which is the default action of the middle-aged Irish Catholic. I showed the letter to Toby and he just wept, which is unusual because he is a very mensch-like person.”

Later Toby was threatened on a train after kissing his boyfriend goodbye on the platform. “He was very frightened by that and it led to more unhappiness, so I thought we’re on a bit of a war footing here.” Toby discussed drag with Barry and how gay men from tough backgrounds sometimes used it as a form of empowerment. Those ideas seeped into the book, though not, Barry is at pains to point out, as a manifesto.

“It was more that the book drew it in rather than me putting it in,” he says. “I was very impressed by the subtlety, the delicacy and the intricacy of the love between Toby and his boyfriend. People talk about tolerance, but it’s not really about tolerance. It should also be about emulation and reverence and learning from.” The unshakeable core of Days Without End is the love between McNulty and Handsome John Cole – and everything in that relationship Barry learned from his son. “It was a sort of piracy,” says Barry, “but, because Toby is also a sort of pirate, he doesn’t mind.”

The novels Barry has written over the past 20 years owe much to the history of his own extended family. The character of McNulty grew out of a reference his grandfather Jack O’Hara made to a great uncle who emigrated to America to escape the famine. O’Hara, who fell out with the author over the literary airing of family secrets, is himself the mainspring of another Barry work, The Temporary Gentleman.

Barry has described his childhood as a “singular mess”. He says he and his three siblings were farmed out to relatives, which is how Barry heard the stories about the first World War, the Easter Rising and the civil war in Ireland that he has used to such effect in his novels. This obsessive winnowing of family secrets suggests a search for certainty after a childhood that had little.

“When we were children we did feel a little bit up in the wind,” he says. “My mother was an actress, my father was a drinking man, and we weren’t totally safe as kids.” He has previously hinted at a darkness in his childhood – though, conversely, also says an author needs to be in touch with the innocence and openness of those early years. He will not, however, be drawn on the precise circumstances of what he once called “the thing that hurt me into trying to put something back in its place. To set up a thousand kingdoms to heal that one blasted site that has nothing on it.”

That sentence is Barry at his most lyrical and plangent, but I take it to mean that the neglect (and perhaps worse) he experienced as a child led him to explore his wider family and pushed him towards the fantasy life that feeds the novelist. It may also explain why he has always cleaved to home, not leading the peripatetic life favoured by some Irish writers of his generation. “I don’t think I can write outside Ireland,” he says. “I need to be there. I probably even need to be in Wicklow. The calf returns to where it got the milk.”

He and his screenwriter wife Alison Deegan have, however, forsaken the mountains of Wicklow, just south of Dublin, temporarily – and are living in Harlesden, London, so she can develop her career. Harlesden is a multicultural area and Barry is enjoying being there. “You can’t buy a fish without having three long conversations about it with local women,” he says. “It’s just like an old Irish village.”

Wicklow will presumably reclaim him eventually, but for the moment he has his own film aspirations. The big-screen version of The Secret Scripture, starring Vanessa Redgrave and Rooney Mara, opens in the UK shortly and then there’s the matter of Days Without End. “I’d like to take a year out to think about the screenplay,” says Barry. Perhaps he could get some help from his wife, who co-wrote the 2014 film A Little Chaos. “I think that would be a recipe for divorce,” he says.