Searching for Lord Haw-Haw: the life and lies of an Irish Nazi 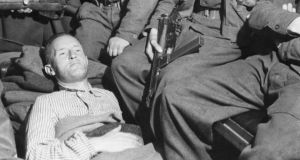 William Joyce after his arrest in 1945. Photograph: Bettmann Archive 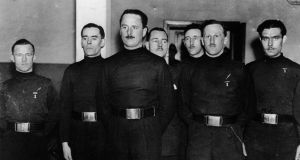 Fascist Oswald Mosley with some of his men, including William Joyce (far left). Photograph: Keystone/Getty Images

Just after the truce which ended the War of Independence an IRA man was dispatched to kill a young man in Galway. The justification for this order was the target’s constant interactions with Crown forces; many people thought he was a spy. Fraternising with British soldiers, even more so with the Black and Tans, was a dangerous pastime.

The young man’s well-to-do family had rented houses to the Royal Irish Constabulary (RIC), one of which was burnt down by the IRA. Sensing the imminent danger, his father, a Catholic with unionist sympathies, moved the family to a safe house. The assassin was denied his target that day in December 1921, as the IRA sought to tie up some loose ends in the wake of the Anglo-Irish Treaty.

William Joyce dined out on this story for years. His near-death experience at the hands of the IRA was yet another layer of his unpleasant yet fascinating life story. Luck was on his side on this occasion. Material held by the Bureau of Military History shows that he had seriously overstepped the mark, though strangely these valuable files are not discussed by historian Colin Holmes in his biography Searching for Lord Haw-Haw: The Political Lives of William Joyce.

The IRA in Galway suspected that Joyce was a scout for British forces, but had no hard evidence to justify taking any action. That was until an IRA intelligence officer intercepted his post and found he was using a RIC cipher in a letter to military personnel. That sealed his fate.

One IRA leader recounted how Joyce had jeered and spat at him in Galway during the period of the truce. The IRA man had then warned a senior RIC officer that if Joyce did not leave the country that evening he would be shot. William Joyce immediately joined the Worcestershire Regiment and a few days later left Ireland for England.

His actions during the War of Independence were fuelled by a hatred of Irish nationalists. Throughout his life Joyce – better known by his wartime nickname Lord Haw-Haw – hated many things and many people. He was a vile man: a wife-beater, pro-Nazi fascist, womaniser, narcissist, heavy drinker, manipulator and liar. In this long-awaited new interpretation of his life, Holmes sets himself the task of disentangling the many lies Joyce told from the facts, and this is no easy task.

Joyce’s father came from Ballinrobe, Co Mayo. He emigrated to the United States in the late 1880s, but returned to Ireland in 1909 and was a successful businessman in Galway city. William, born in Brooklyn, attended Catholic schools in Galway and was very bright, even precociously deciding to convert to Anglicanism at the age of 14.

After he left Ireland he studied at various colleges in London and even started a PhD in psychology. Academia was not his bag however. Instead, he became deeply involved in right-wing politics in London in the 1920s, joining and leaving the British Fascists, the National Fascists, even the Conservative Party before ending up a major player in the British Union of Fascists led by Sir Oswald Mosley in the 1930s.

‘Knifed by an Irish woman’

Joyce claimed the disfiguring scar across his face was a wound inflicted by a ‘Jewish Communist’. Holmes shows this was not the case, as his first wife Hazel later recounted. He was acting as a steward at a right-wing rally in Lambeth in 1924, when a few men in the crowd started to sing Come Back to Erin to antagonise the fascists. A riot ensured in which he was injured. As his ex-wife put it so elegantly, he “was knifed by an Irish woman”.

Joyce was a well-known figure among the plethora of British groups which contained fascists, anti-Semites and other like-minded individuals. He was an engaging public speaker and shared many platforms with other people discussing Jewish plots to take over the world. Eventually, and predictably, he split with Mosley in 1937, founding the National Socialist League, which propagated his gushing enthusiasm for Hitler and the Nazis and widely promoted the idea of a Jewish world conspiracy in the form of international finance.

Sensing rightly that he would be interned when war broke out with Germany, he left Britain for Berlin. After a shaky start, Joyce secured a role with the Nazis’ English-language radio service. Throughout the war Lord Haw-Haw’s broadcasts were popular in Britain: they were a source of amusement, but were also seen by some as prophesying the locations of future air raids when he mentioned different places across the country.

He also listed the names of British POWs to increase his listenership. The Nazi regime was very pleased with his work and awarded him the first class merit cross in 1944.

With the defeat of Hitler in April 1945, Joyce and his second wife tried to go underground. However, a chance encounter with a British officer who recognised his voice ended up with him being shot and arrested. He was returned to Britain, tried for treason in September 1945 and convicted on a technicality. (False claims he had made when applying for a British passport – he had said he was born in Galway – made his actions in Germany treasonable.) After an unsuccessful appeal, he was hanged at Wandsworth prison on January 3rd, 1946. Joyce’s remains were later reinterred in Galway in 1976 as he had wished.

A number of good books have been written about Joyce’s life. What Holmes brings to the subject is a forensic attention to detail, especially the half-truths, the subsequent reinventions and retellings by his friends and enemies, and Joyce’s own enormous capacity for deception. This is the historian as detective. Sometimes the layers of detail can overwhelm the reader, but on the whole this is a very readable and carefully argued biography.

Whether a biographer has to like or even admire her or his subject is an intriguing question. Understandably, neither affection nor admiration are evident in this book. Researching such a repulsive man must be very difficult, which makes this biography all the more impressive an achievement. It will be the authoritative account of Joyce’s life for many years to come.

Enda Delaney is professor of modern history at the University of Edinburgh.