Seán Hewitt: I would give all my poems to have my father back 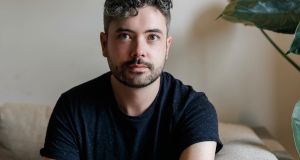 Seán Hewitt on Tongues of Fire: The fungus is emblematic of many of the poems in the book. Photograph: Bríd O’Donovan

On the cover of Tongues of Fire, there is an image of a rust fungus. Gymnosporangium clavariiforme, or Tongues of Fire. This fungus infects juniper branches. Then, in the second stage of its cycle, the spores are lifted on the wind and latch onto hawthorn trees, causing the berries to grow white tubes.

In other words, it has a sort of primary and secondary growth. Like a cancer, it metastasises. It can’t go unnoticed that these are tongues, speaking from the branch, something sacred becoming physical, something spiritual pushing out into the matter of the world, something unspoken being given voice.

My father became ill unexpectedly in February last year. First, there were intense shooting pains in his head, numbing his face, keeping him up at night in a frenzy of pain. Then, after some scans, he was diagnosed with stage-4 cancer. He died on the same day that I signed the contract for Tongues of Fire.

And so I have a strange relationship with the book itself – it is, in many ways, a testament to that grief, and to confusion. The final quarter of the book was written in those final three or four months. I would give all my poems to have him back. And so it’s hard, in a way, not to resent their existence. They were born out of his dying; but I am learning, slowly, to forgive them.

That fungus, as well, is emblematic of many of the poems in the book – it came, for me, to speak of some boundary I was working away at without at first being fully conscious of it. I wanted to explore the places where nature, the body, and something beyond the body, meld together, speak to each other or of each other. Where does matter come from? Where does the physical world start, and where does something beyond the physical, observable world begin?

When my father was dying, I became acutely aware of a sense that everything was somehow synthetic, that the world was full of passage, discourse, things moving from one place to another, growing and dying, being born and then being taken back.

The final poems in the book are not elegies, but pre-elegies; they anticipate the moment of dying and try to give voice to that liminal place. In Tree of Jesse, one of the longer poems, I am writing to my father: “my head/ already is haunted with you./ I have become a living afterlife.”

The natural world is full of bodies, full of things constantly in motion, at work. Like a poem, nature pulls things up from the earth and brings those things into new form and meaning. Poems, I think, are the artefacts of our mind, just as trees, or birds, are the artefacts of history, biology, weather, all those things we might think of as the mind of the world. Each is an inflection of it, some moving part of the greater whole.

And so, really, artefact isn’t quite the word – these are not static, but thinking things. They shift in new contexts, taking on new forms, new senses of self.

The second part of Tongues of Fire is a series of poems that tells the story of Suibhne (or Sweeney), the famous king of Irish legend, who was cursed, and lived among the treetops. When I placed them after the book’s first section, which is set mostly in Sweden (where I lived for some years) the poems from Buile Suibhne took on echoes, and the middle Irish tale came to seem much more queer than it did when it was in its original context.

Suibhne, at one point, flies to Britain and meets another madman, Fer Caille, and the two spend a year caring for each other. Fer Caille sings, “O Suibhne, let’s keep guard/ over each other, now/ that we have found ourselves.” I thought there was something so beautiful in that – finding another person who didn’t “complete” you (as the old cliche goes) but who let you find yourself; the idea that we become whole in community not by outsourcing ourselves, but by deepening ourselves.

Unlike other translations of this text, mine is not complete. Instead, I wanted to lift the lyric moments from the narrative, the moments in which Suibhne feels most isolated, most in love, most regretful. In fact, some of the poems are completely invented, and are not translations at all; others are amalgamations of pieces of text which I’ve sewn together in my own way. In one of them, Suibhne realises he is dying, and sings a song that walks along the tightrope of love and selfhood:

I used to think

that the chanting of the mountain-grouse
at dawn had more music than your voice,
but things are different now. Still,

it would be hard to say I wouldn’t rather
live above the bright lake, and eat watercress
in the wood, and be away from sorrow.

I have two poetic fascinations. The first is a poetry of the body, and this is an inheritance from queer writers. From Mark Doty, Danez Smith and Andrew McMillan. But I also have a passion for the natural world seen slant, from poets such as Alice Oswald, Jos Charles and Gerard Manley Hopkins. For me, these two are never distinct. The body is the receptor, the locus of all of the poems here because they are, quite necessarily, all focused through my body. And so, in Tongues of Fire, the natural world is also a queer world, a bodily world.

A fair few of the poems in Tongues of Fire deal with sex, and the growing into sex and shame that queer people experience. Someone once remarked that a lot of my poems are set at night. They weren’t wrong. Night-time comes with adulthood – the freedom to walk about after dark, to go to clubs, to meet people unexpectedly. It comes with a new sensuality and sexuality.

The senses work differently: the night is quiet, but full of sounds, and is linked with a sort of nerve-raising potential. It is, for me, also an inversion of the world I grew up knowing. The night-time is a sort of counter-world, an alternative map, a film-negative of the day.

The lyric poem – its patterning, its rhyme, its insistent “I” – has for me a beauty that is perhaps unfashionable, and might seem to make it isolated from the political imperative. But it is my wager that in speaking of ourselves, we will find readers who share something of that emotion, that experience, that flash of strange perspective. In other words, it is my contention that no poem is ever isolated, if it is done right.

The great Muriel Rukeyser asked, “What would happen if one woman told the truth about her life? The world would split open.” And I think that could be said again. What would happen if a queer person told the truth about their life? Maybe the world might be queerer, might be (in the words of Hopkins) more “counter, original, spare, strange”, than we previously thought.

Tongues of Fire is published today by Jonathan Cape