Sarah Waters: ‘I kind of missed the lesbian stuff’

The historical novelist has set her new book in the 1920s, fresh territory for her. It is ‘a love story complicated by crime’ 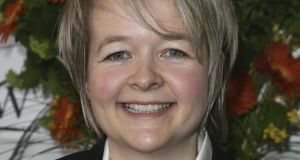 Sarah Waters: ‘Sexual desire is a wonderful engine for a plot. My novels all have lesbian relationships and desire, but I’d never written a classic lesbian love story.’ Photograph: Gareth Cattermole/Getty Images

‘I love research,” says Sarah Waters, author of some of the most popular and groundbreaking historical novels of the last 20 years. “Sometimes I think writing novels is just an excuse to allow myself this leisurely time of getting to know a period, and reading its books and watching its films. I see it as a real treat.”

Waters immersed herself in the 19th century for her first three novels, Tipping the Velvet, Affinity and Fingersmith, before moving on to the 1940s in The Night Watch and The Little Stranger. But in her gripping new novel, The Paying Guests, Waters moves into what is, for her, new territory: the 1920s.

The book is set in the London of 1922, a city whose residents are still reeling from the effects of the first World War. In Camberwell, a young woman called Frances Wray and her widowed mother are forced to take in lodgers, and their shabbily genteel household is transformed by the arrival of brash clerk Leonard Barber and his wife, Lilian.

It’s an emotionally engaging and hugely satisfying novel, with a plot that keeps you guessing right until the very last page. This makes it difficult to write about without giving too much away, but it’s not spoiling things to say that an attraction develops between Frances and Lilian, which sets off a dramatic chain of events.

As ever, Waters’s literary voice feels authentic to the time her story is set in, while always remaining distinctly her own. But The Paying Guests wasn’t an easy book to write. Waters was drawn to the 1920s “in the spirit of wanting to find [out] more about it, because it was the bit in between the periods I’d written about before”.

As usual, she began her research by immersing herself in the fiction of the era, but somehow she “couldn’t connect” with the spirit and tone of the time until she read a true account of one of the decade’s most sensational court cases.

Edith Thompson was a married woman who had an affair with a younger man called Frederick Bywaters, a relationship that ended in violence and tragedy in 1922.

The story of Frances, Leonard and Lilian in The Paying Guests is very different to the Thompson case, but the idea of a love triangle that leads to disaster sparked Waters’s imagination.

“I began to think, what would it be like if, in that very familiar scenario, the lover was female,” she says. “How would that change the story and how it pans out? And that really was the heart of The Paying Guests. From there I began to think about a scenario that would allow me to explore all those issues of the time, about class and gender and social mobility. And the novel grew from there.”

But there were still difficulties. Her last book, The Little Stranger, was relatively straightforward to write, she says; the story was clear in her head from the start. But The Paying Guests was harder to get a handle on. Waters had the central characters and basic plot, but “I couldn’t get it right. And then, about halfway through, I realised this was a love story.”

A conversation with her agent sparked the breakthrough. “She said, ‘I see this as a crime novel that’s complicated by their love.’ And I thought, no, that’s not true for me – it’s a love story that’s complicated by crime. Then it became a much more straightforward writing process. It was a question of figuring out their characters, really.”

After The Little Stranger, which is set in post-war England and narrated by a male doctor, The Paying Guests sees Waters returning to the lives of lesbian characters. “I kind of missed the lesbian stuff, actually,” she laughs. “There is desire in [The Little Stranger] but it’s not sexual or romantic desire, and sexual desire is a wonderful engine for a plot. I did have a slight hankering to get back to something like that. And I’m always interested in women’s lives. If I’m looking at the past, I’m interested in women and what was going on for lesbian and gay people.”

LGBT visibility has increased greatly in the UK since Tipping the Velvet was published in 1998. Waters, whose novels have all been big mainstream hits – four were turned into prime-time dramas by the BBC and ITV, and three were shortlisted for the Man Booker Prize – has played her own part in that. She remembers the gay and lesbian fiction available when she was in her 20s, most of which was published by small specialist presses, and how the publication of Jeanette Winterson’s The Passion by Penguin “seemed like an amazing moment to me. And now it’s not at all remarkable to see a lesbian novel published by a mainstream publisher. That’s a fabulous thing, and it has changed in 20 years or less.”

The Paying Guests is not only a lesbian love story, or even a crime story. It’s also a portrait of a society scarred by war. Waters says that, when she first decided to write about the 1920s, “I had underestimated how large the war would have to loom in the novel, because I’d underestimated how much it loomed in the period.”

She had thought of the 1920s as a distinct era – an age of modernism and flappers and social change. “But, of course, the decade itself had very different stages, and the early 1920s was very much still in the shadow of the war. In the first couple of years you can almost see people pausing and taking a breath and gathering themselves before moving onwards.”

In the relationships between the impoverished upper-middle-class Wrays and the increasingly confident lower-middle-class Barbers, Waters examines the changing and complicated class dynamics of a period that would soon witness Britain’s first Labour government.

“Because I tend to write lesbian stories, if both my lovers are female then it interests me to look at differences there might be between them,” she says. “They might be the same gender, but there will be all sorts of other factors involved in who they are, in their sense of self, their ambitions. And bringing those two things together seems to be a good, fruitful thing to look at as a writer. It’s very much how class complicates things; that’s what I always want to explore.”

Waters’s next project is a play called The Frozen Scream, supposedly based on a spooky lost 1920s novel (“That’s our story and we’re sticking to it”). It opens in Cardiff in December, and Waters really enjoyed collaborating with the play’s co- author, Christopher Green.

As for her next novel, she has a couple of ideas but is “kind of deliberately not thinking about it” at the moment. She does say, however, that she’s considering writing about the 1930s. “I’ve never lost my excitement about the difference of the past,” she says. “The fact that you don’t have to go very far back for things to look quite different and for people to think of themselves differently and for social relations to feel different. It just becomes foreign. Getting to know [about it] and then finding ways to bring it to life through fiction – those are very exciting challenges.”

The Paying Guests is published by Virago