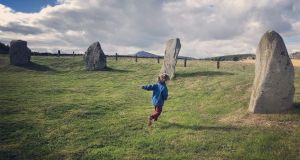 Easter Aquorthies, a stone circle near Inverurie in north-east Scotland.

“Aberdeen. Aberdeen!” thinks Belacqua in Samuel Beckett’s More Pricks Than Kicks on his first encounter with a hospital day-nurse and her “mighty rushing sound of starched apron”. He has been admitted for an operation on a boil on the back of his neck, but his surprise at encountering a Scottish nurse is shortlived, since a few pages later he dies under anaesthetic.

I too have been surprised by Aberdeen, when offered a job there in 2012, and have even spent time in Aberdeen Royal Infirmary, for an inguinal hernia. Just this year, though, the place, or more specifically the Aberdeenshire countryside where I live, has allowed me to connect to Beckett in an unexpected way.

Beckett and Scotland may be a “strangely neglected topic”, as we say in academe, but examples are not lacking. In Recent Irish Poetry, Beckett’s 1934 diatribe against neo-Celtic Twilighters, reference is made to Ossian, the creation of Scottish writer and University of Aberdeen graduate James Macpherson.

Macpherson’s Ossian, that great precursor of Irish Celtic revivalism, was savaged by Dr Johnson, who believed it to be the work of a fraud. He was evidently much on Beckett’s mind in the ’30s, since he pops up again in the French translation of Murphy. Here we learn that Dr Angus Killiecrankie of the Magdalen Mental Mercyseat was conceived on Shetland, born on Orkney, weaned in the Hebrides, and is a “grand admirateur” of Ossian.

Scotland’s patron saint, St Andrew, features in the later novel How It Is, where his splay-limbed crucifixion is compared to the postures of the mud-bound narrator. It is tempting to add the poem Alba, from the 1935 collection Echo’s Bones and Other Precipitates, which critics have inexplicably failed to interpret as a Beckettian aisling, addressing Scotland by its Gaelic name. But this may be a Scottish connection too far…

And then there is Beckett’s use of Scots. In Dream of Fair to Middling Women, Belacqua mentions the Smeraldina’s “birdneb” (= beak or mouth), Arsene in Watt speaks of “skelps” (wallops), and in All That Fall Maddy Rooney bewails a horse’s “cleg-tormented eyes”.

“What are you doing stravaging down here on the public road?” Mrs Rooney asks Tommy, also in All That Fall, while the narrator of From an Abandoned Work uses the same word to describe “stravaging the same old roads in all weathers”. Good Scots word that it is (and more usually spelt “stravaig” in Scotland), its origins are in fact French: extravaguer, meaning “to wander” – a small linguistic token, perhaps, of the Franco-Scottish “auld alliance”.

As I stravaiged around the woods and back-roads of Aberdeenshire in the summer of 2020, I pondered my upcoming 50th birthday, and realised that Beckett had been that age when he wrote All That Fall.

Beckett’s play involves Mrs Rooney making her way to a railway station in Boghill, a lightly disguised version of Foxrock, and given how often my adventures beat a path to Inverurie railway station and the garden centre behind it, I began to sense an opportunity.

What draws me to the garden centre is our two young children’s appetite for pancakes, so while All That Fall is a play of ageing and decline, my adaptation of it would be a play of parenthood – parenthood, Pictish stones and pancakes.

After a period of intense composition in French, All That Fall marked a return to Irish roots for Beckett, though with a strong admixture of strangeness and misrecognition. Mrs Rooney struggles to remember if the Free State contains 26 or 36 counties. Having established her Protestant detachment from the still-young Irish State, she worries that she is speaking a dying language, “just like our own poor dear Gaelic”, prompting at least some critics to wonder who she means by “our”.

I have immersed myself with gusto in the linguistic patchwork of Scottish life, and was happy to throw in Scots-speaking characters and dashes of Jacobite Gaelic. The play also brought me up sharply against questions of home and belonging.

Scotland is home now, though paradoxically somewhere I speak more Irish than I ever did in Ireland. In the play, I attempted to find an outlet for these questions in meditations on the symbol stones found in such abundance in my locality, and the sense they radiate of a lost civilisation, given how little we know of the people who fashioned them.

I was also aware of writing at a time of sharp contradiction between resurgent Scottish nationhood and the (possibly terminal) decline of the unitary British state. Any independent Scottish state will, I trust, have little in common with early medieval Pictland, but as the Brexit debacle rumbles on I have found the crypto-nations of the past, Jacobite might-have-beens, and other byways of the Scottish past congenial places from which to ponder current events.

All That Fall hinges on a mystery. Mr Rooney’s train has been delayed by a child falling under its wheels. Was he involved? Strong hints are dropped that he may have been. I too needed a good, suspenseful crisis, though I won’t go into detail here on my little wheeze to inject some drama into the trudge towards a pancake and a soya cappuccino. Also some “tomato soup”, in one of the very few words spoken by the Maggie Simpson-like younger child called Sadhbh, “named no doubt after one of your Celtic serpent goddesses”, in the words of a starchy “religious enthusiast” she encounters en route.

I have no experience in the theatre and would be pleasantly surprised if anyone felt like staging it. But luckily for me Aaron Kent of Broken Sleep Books took the text on, while suggesting we describe it as a “fiction for voices”. If anyone fancied joining me for a real-life performance, I am keen to hear your theories on the Christianisation of the Picts by St Adomnán, and the pancakes are on me.
Stravaig is published by Broken Sleep Books. David Wheatley of University of Aberdeen is co-editor, with Ailbhe Darcy of Cardiff University, of A History of Irish Women’s Poetry (Cambridge University Press, July 2021)