He likes to blur the lines between fact and fiction, and if pushed he might recite some Tolkien in Elvish – this is not the type of conversation one associates with Rushdie 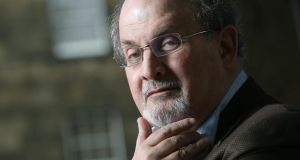 Salman Rushdie: ‘If you don’t have a pretty clear sense of who you are, you’re not going to write good books.’ Photograph: Jeremy Sutton-Hibbert/Getty Images

Of all the things you don’t expect to hear when you answer your phone, the words “it’s Salman Rushdie here” must be pretty close to the top of the list. It’s not as if I’m not expecting the call. The death sentence imposed on Rushdie by Iran’s Ayatollah Khomeini in 1989 after the publication of his supposedly blasphemous novel The Satanic Verses has long been revoked, but the contact details of the most famous novelist in the world still aren’t given out to strangers. You don’t call Salman Rushdie: he calls you.

Rushdie is in Dublin for the Dalkey Book Festival this weekend. I’ve been warned that, during our phone conversation, he won’t talk about the fatwa. Or about his personal life. Or global politics.

On top of all that, he has produced three of my favourite novels of all time in Midnight’s Children, Shame and The Moor’s Last Sigh. I’m so jittery with nerves that when the phone rings – at precisely the agreed moment – I nearly fall off the chair.

Rushdie has written two children’s books. Haroun and the Sea of Stories appeared in 1990, and Luka and the Fire of Life was published in 2010. With 20 years between them, did he approach the pair very differently?

“The two were sort of opposites to write,” he says. “In the case of Haroun, I knew the story – it was one of those rare occasions for me when the story arrived almost fully formed. The problem was how to tell it. In the case of Luka, I felt I knew how to tell it, but the story took a lot of working out. Whichever book I’m writing, there’s always the question of finding the appropriate language for it. But once I’ve found that language and that tone, I just let rip really.”

As a master of the fantastical, it’s that very particular narrative tone of Rushdie’s – innocent yet self-aware, veering from portentous to hilarious – that, when it succeeds, sweeps you up and carries you off, bobbing happily with the tide.

This is also how oral storytelling works, so it comes as no surprise to hear that as a young writer Rushdie was fascinated by the Indian storytelling tradition.

“Those narratives are constructed out of many inter-looping narratives, which are held together by the performance of the voice,” he says. “I thought it would be interesting to see if I could find a written-down way of doing something like that.”

The road to Midnight’s Children

Fans of Midnight’s Children, and there are many – this is the book that not only won the Booker Prize but was chosen as the Booker of Bookers on the prize’s 40th anniversary – like to think that the author arrived on the literary scene fully formed, and produced an instant masterpiece. As he wryly explains, that is not the case.

“Midnight’s Children came out 12½ years after I left Cambridge,” he says. “I had a very difficult beginning, really. I have, somewhere, files of three unpublished manuscripts – and the first book that I did publish, Grimus, was not exactly greeted with loud cries.”

Midnight’s Children emerged after a long period of self-reflection and interrogation. So it was an internal process, rather than a question of literary technique?

“Of course, it doesn’t hurt to have some technique,” he says. “But if you don’t have a pretty clear sense of who you are as a human being, you’re not going to write any good books.

“I had been bouncing between three countries: India, England and Pakistan. During the time I was at Cambridge, my parents had moved from Bombay to Karachi, and I didn’t want to live in Karachi. I was quite disoriented. I needed to orient myself, and it took quite a long time.”

The historian in him

For the reader, one of the most striking aspects of Rushdie’s books is the sheer amount of information they contain. This, he says, is because he’s a historian by training. “So that dimension – what happened, and how, and why, and what did it do to people – has always been right there in the middle of almost everything I’ve written.”

For his most recent novel, 2008’s The Enchantress of Florence, Rushdie did an enormous amount of research. “Not just of the Mughal world and the world of the Renaissance, but of all the worlds in between. Because, after all, the heroine has to travel across the Ottoman world and she ends up in the New World.

“So I had to immerse myself in all of that. And there just is a point at which you have to think, ‘Okay, I’m going to put the books away and make it up’.”

And boy, does he make it up. Rushdie’s mixing of truth and fiction is partly what got him into – well, you know what. He’s a mixer and a stirrer. In his rock’n’roll novel The Ground Beneath Her Feet he made a motif out of misattributing famous songs to the wrong composers.

His most recent book, an account of the fatwa and what followed, Joseph Anton: A Memoir, has been criticised for its blend of clear-eyed reportage and uncharitable portraits of his four spouses.

Back at The Enchantress of Florence, this propensity for mischief led to a tart exchange of emails with Rushdie’s French publisher, Ivan Nabokov.

“Ivan wrote to me about this incident when, travelling around the shores of the Black Sea, the heroine meets what I describe as ‘potato witches’. Potato witches also crop up in Shalimar the Clown, by the way. It’s a little motif of mine. But anyway, he wrote to me and said, ‘Of course, you know that the potato was not introduced into the Black Sea area until 200 years later’.”

A crackling noise emerges from the phone, which, after a moment of panic – has he been cut off? has he hung up? – I identify as laughter.

Rushdie was impressed by Nabokov’s erudition, which is almost as comprehensive as that of his famous uncle Vladimir, but was reluctant to relinquish his vegetable-based joke.

“So I just thought, ‘F*** it. It has now’.” Another crackle. “I could have had aubergine witches but they’re not as funny.”

Emboldened by the note of levity, I ask the question I have already skipped over as simply too silly. Did Rushdie really go through a Lord of the Rings phase when he was at the English public school of Rugby?

“Yeah,” he says. “I don’t think I’ve ever quite grown out of it, actually. There was a point where I could recite some of those Elvish verses – which I’ve mercifully forgotten. But I can still, if really pushed, recite the text of the inside of the ruling ring in the language of Mordor.”

He might just do that when he comes to Dalkey. He will almost certainly speak about the importance of Irish writers to his development as a novelist.

“I can remember the moment at university, of discovering both Joyce and the novels of Beckett and being affected by them – probably more deeply than by anything else I read in my student years,” he says.

Dalkey Book Festival starts on Thursday. Rushdie will take part in a debate on freedom of speech with Olivia O’Leary, Fintan O’Toole and Rory Sutherland on Saturday at 4.30pm; there will be a public interview with the author at 7.30pm; and he will appear with Amos Oz and Declan Kiberd in a session on the global novel on Sunday at 1.30pm. dalkeybookfestival.org