Roddy Doyle’s Barrytown Trilogy is One City, One Book selection 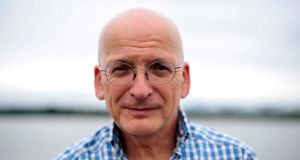 Roddy Doyle: “Twenty-eight years after I started writing the novels that make up The Barrytown Trilogy, I’m delighted - and proud - that it will be the Dublin: One City, One Book choice for 2015.” File photograph: Aidan Crawley/The Irish Times

Roddy Doyle’s Barrytown Trilogy is the official selection for the 2015 Dublin: One City, One Book Festival.

The festival encourages people to read a book connected to the capital city during the month of April each year. The selection must have a Dublin connection - either through its content or its author. This year’s choice has both.

The trilogy contains some of Roddy Doyle’s most loved novels about the Rabbittes, a family in working class Dublin.

Mr Doyle said in a statement: “When I wrote the books that make up The Barrytown Trilogy, I hoped that the city would come off the page, like a character. When the characters spoke, Dublin spoke. So, twenty-eight years after I started writing the novels that make up the trilogy, I’m delighted - and proud - that it will be the Dublin: One City, One Book choice for 2015.”

The Commitments (1987), the first part of the trilogy, charts the meteoric rise and fall of Jimmy Rabbitte’s soul band and their bid for stardom in 1980s Dublin. The Snapper (1990) is about Sharon Rabbitte’s unexpected pregnancy, while the third instalment, The Van (1991), features the family’s patriarch, Jimmy snr, and his friend Bimbo entering the chipper van business. The book was shortlisted for the Booker Prize in 1991.

All three novels were made into feature films.

Dublin City librarian Margaret Hayes said: “Dublin: One City, One Book is about bringing Dublin’s literature to a wider audience. The Barrytown Trilogy is sure to help us to build on the incredible success the initiative has enjoyed.

“Dublin City Public Libraries will produce an imaginative festival programme which will animate the book through music, film and public readings in April 2015.”

The 2014 book choice was If Ever You Go: a Map of Dublin in Poetry and Song, which organisers said successfully brought poetry to a wider audience. It is one of the most borrowed books in Dublin City Public Libraries this year.

The annual book award began in 2006 and is an initiative of Dublin City Council’s Public Library Service as part of its Unesco City of Literature designation. It is supported by the Department of Arts, Heritage and the Gaeltacht.