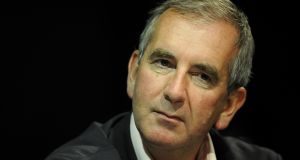 Robert Harris: “I like to walk around and live a quiet bourgeois life and explode empires in my head. I enjoy creating imaginary worlds.” Photograph: Norbert Millauer/AFP/Getty Images

London’s Garrick Club was founded by a group of “literary gentlemen” in 1931 as a meeting place for men of “refinement and education”. Today, its clientele of pinstriped suits and off-duty Jeremy Clarksons discuss corporate deals and their latest trips to Sicily while reclining on leather sofas beneath soaring ceilings with only the dull tock of a grandfather clock to disturb them.

Literary associations aside, it’s a strange meeting place for a man as unassuming and unpretentious as Robert Harris. The 10-million-and-counting best-selling journalist turned author, who describes himself as a sort of hapless Lucky Jim-type character (or film’s clumsy fictitious Frenchman Monsieur Hulot) appears quietly on the Garrick’s grand staircase before taking a corner seat in a large and overwhelmingly mahogany room.

Harris, a little hesitantly, is here on business – to talk about the final instalment of his Cicero trilogy, a prolonged 12-year labour of Roman love. The 449-page book, and his 10th novel, Dictator, is now out and Harris is happy to finally be “toga-free”.

The first question is, why Cicero? “He’s been rather pushed aside in popular culture,” says Harris. “He’s hardly given any part in the Shakespeare plays and he’s generally just seen as a temporiser and a bit corrupt, so it was great to be able to get him and show him as a human being.”

Harris, who loves “unmediated documents”, diaries and letters, poured over Cicero’s 29 volumes of writing and 800 letters to create an intimate portrait of his hero.

“He’s quite compassionate, squeamish about the shedding of blood and very concerned about liberty and living the ‘good’ life. By which he means not having a good time, but doing the right thing. So he’s a very warm character for a modern writer.”

Politics, be it in ancient Rome or Westminster, has always fascinated Harris. He began his career as a political journalist. In his 20s, he was a young gun reporter on Newsnight and Panorama (where he met and befriended Jeremy Paxman) and went on to become a political columnist at The Observer.

On Panorama in the 1980s, holding the attention of the audience for 50 minutes in its prime-time slot on BBC1 took skill. So Harris became a specialist at structuring stories.

“It stood me in good stead as a novelist, because the idea of taking a complicated story and hooking the audience at the beginning and taking them through it is something I enjoy.”

When he started to write books, Harris stuck to his journalistic roots; he was interested in fact, not fiction. “Reality always seemed more interesting to me than anything I could invent – how could one improve upon Bush or Regan or Thatcher?”

His “Alice in Wonderland” moment came while he was writing Selling Hitler. After reading Hilter’s Table Talk, a series of conversations and monologues that were delivered by Hitler from 1941 to 1944, he became intrigued by the idea of what would have happened if Hitler had won the second World War. Harris wanted to write about what that world would be like – the people, the culture, the music – so for the first time he had to invent, to imagine.

In 1986, he penned Fatherland. With only a third of the book completed his agent called to say seven publishers were interested. Later, when it sold at auction, Harris made more money in a few minutes than he had done in his entire career as a journalist.

“It was very exciting and completely unexpected,” he says softly. Did he go out and blow his advance on a Jaguar, a helicopter, a yacht? He considers before he answers. “No. We had one child, another was just born. We moved to the country. We didn’t buy a very expensive house but we moved out of London and I’ve lived out of London more than 20 years.”

Part of Harris’s huge success is that he writes for readers and is adamant he has never sought the approval of critics. “There’s nothing worse than writing for critics or prizes, even worse. I just write what interests me. I’m still the 10-year-old boy in his bedroom with his pretend newspapers and his maps of islands, dreaming in my head.”

He’s married to Gill Hornby, a former Telegraph journalist who has turned to writing books. “I’ve seen from the other side how difficult it is to be married to a writer,” he says, allowing himself the smallest of grins, “so I see now what it must have been like for her for 20 years having to pour praise into this black hole.”

Ink in his psyche

It’s been a happy journey though, with Harris and Hornby. Fatherland came out the same year as Fever Pitch and the two have lived their careers in parallel, writing very different but enormously popular books. And yet, Harris is not the man to ask about contemporary fiction. “I’m almost embarrassed about that because people ask me ‘what do you read?’ but I’m not really in the swim of it. My wife and brother-in-law read much more.”

I wonder if he’s ever had that strange authorial moment of seeing someone on a train reading one of his novels? It happens, he says, but not too often and when it does he feels anxious, not proud.

“I always feel nervous they’re about to nod off and let it slip from their hands. Or [in a bookshop] they’ll pick it up, examine it closely and put it down. That’s a bit of a let down.”

Harris comes from a humble Nottingham family. His father was a self-educated blue-collar worker who read James Joyce and Graham Green. He worked as a printer and one of Harris’s earliest memories is his dad taking him to work, aged four or five. There, the sight of the enormous German printing machines, huge piles of paper and the smell of the ink entered his psyche. “It’s a strong memory. Right from the off I was interested in writing and journalism.”

In the happy Harris home, literature was not a “minority pursuit”, it was for everyone and so he says he would never want to write “anything so pretentious it wouldn’t be accessible to the person I was at the age of 16, or a man like my father”.

There wasn’t much money: they lived on a council estate for six years, but reading and writing got Harris into Cambridge – making him the first in his family to go to university.

Both his parents are dead, his mother for a decade, his father for nearly two, but they lived long enough to see the success of Fatherland and his later novel Enigma. After they died, Harris found their proud stash of everything he’d ever written – every newspaper article was kept, all appearances on Newsnight and Panorama taped.

He likes drinking wine and the odd cigar but has no hobbies, no interest in sport; he’s no collector of cars or anything at all for that matter.

His four children are the only thing, he says, that can be counted as an extravagance. “I like to walk around and live a quiet bourgeois life and explode empires in my head.”

He is so calm, I wonder if anything keeps him up at night? He worries about his children, he says, but one of the advantages of writing historical fiction is realising that other generations have been through the same, or often worse, things and somehow they all came through, so there is no point being “too apocalyptic” about things.

One thing is for sure; the next Harris offering will neither be memoir or autobiography. That would be “banal” because he’s “never done anything”.

“I could never have written 10 novels about my own life. I could barely write 10 pages that were interesting.

“I enjoy creating imaginary worlds. But for myself I’m quite diffident. Friends like Jeremy [Paxman] go anywhere and are recognised, I’d hate that. I don’t like being photographed. I have no wish to be recognised,” he says walking down the ruby carpeted stairs of the Garrick Club, through the grand glass doors and out onto the anonymous streets of London.

Dictator by Robert Harris is published by Hutchinson