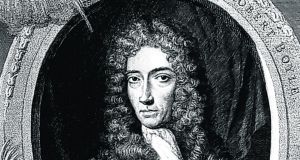 A 17th century book by the Co Waterford-born scientist Robert Boyle has sold at auction in London for almost half a million euro – and established a new record as the highest price ever paid at auction for a book by an Irish-born writer.

The price achieved was over five times the highest pre-sale estimate of £70,000.

The price exceeds the previous record for a book by an Irish author at auction, created at Christie’s in New York 12 years ago, when a first edition copy of Ulysses by James Joyce sold for $460,500.

Boyle, regarded as the founder of modern chemistry, was born at Lismore Castle, Co Waterford in 1627 and died, aged 64, in England in 1691.

He was educated at Eton and Oxford but occasionally returned to Ireland, where he inherited land from his aristocratic family.

He is best-known to generations of chemistry students for Boyle’s Law and is remembered in the awarding of the biennial RDS Irish Times Boyle Medal for Scientific Excellence.

Speaking after the auction in the New Bond Street saleroom, Andrew Currie, a spokesman for Bonhams auctioneers, said The Sceptical Chymist was “a milestone in the history of chemistry” and the first book “that combined chemistry with physics”.

In it, he said, “Boyle postulated the then revolutionary theory that matter was composed of atoms and clusters of atoms in motion and that every phenomenon was the result of the collision of particles in motion”.

Mr Currie said the book had been owned by a private English collector, “the late Dr Hugh Selbourne, who assembled one of the finest private collections of books of the mid-20th century while practising as a physician in Manchester”.

The unnamed buyer at the auction was a “private overseas collector”.